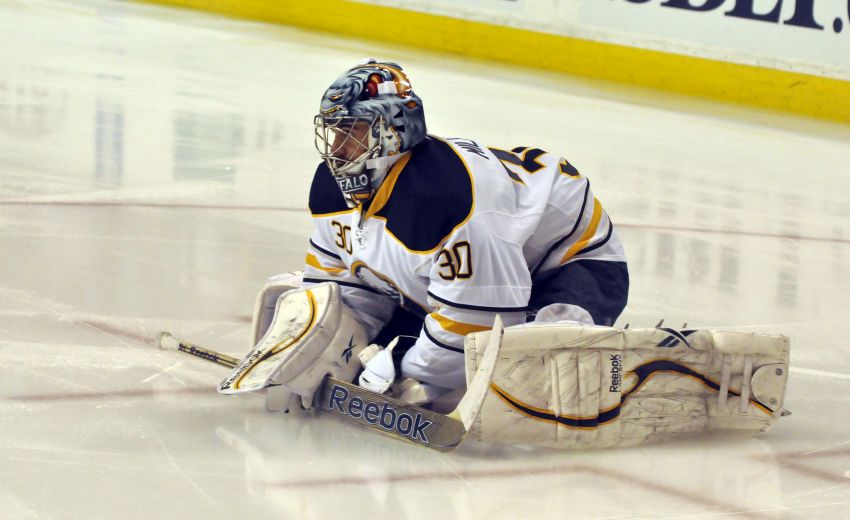 BUFFALO – Growing up, Sabres legend Ryan Miller said he usually wore No. 30. Mike Gilmore, a Michigan State goalie he liked, sported it. So did some of the NHL’s best netminders at the time.

But when Miller reached junior hockey in 1997, an older goalie for the Soo Indians had the digits.

“There’s not a chance I’m getting that number,” Miller said Thursday after the Sabres retired his No. 30 and inducted him into their Hall of Fame. “They just grabbed the next jersey off the rack, this cut-up jersey, 39. They said, ‘Here you go.’ It was just shredded. The last guy didn’t like it tight so he cut it, and I had to wear it.”

Miller played well with No. 39, so he kept it, wearing it throughout his decorated career at Michigan State.

Miller, however, decided to change his number when he arrived in Buffalo in 2002. While Dominik Hasek’s No. 39 hadn’t been retired yet – that happened in 2015 – Miller knew it would hang in the KeyBank Center rafters someday.

Miller will drop the puck for a ceremonial faceoff prior to this afternoon’s home game against the Anaheim Ducks, his last NHL team.

Sabres defenseman Rasmus Dahlin, 22, created Dylan Cozens’ overtime goal in Thursday’s 3-2 win, lofting a long pass from his own zone to send the center on a breakaway.

Dahlin’s assist was his 50th point in just his 43rd game this season.

Incredibly, according to TSN, only three defensemen under 23 have reached the 50-point mark faster than the Swede: Hall of Famers Bobby Orr, Paul Coffey and Denis Potvin.

Those names, of course, are legendary.

Cozens’ goal at the 12-second mark against the New York Islanders was the second-fastest overtime goal in franchise history. Jason Dawe scored 10 seconds into overtime on Jan. 12, 1997 to secure a 3-2 road win against the Arizona Coyotes.

Cozens said having a breakaway so quickly surprised him.

“I kind of blacked out and shot it as quick as I can and it found a way in,” he said. “It was just so much excitement to win a game.”

“I know he’s fast so I tried to put it in an area, which luckily succeeded,” he said.

Prior to Miller’s ceremony, former Sabres winger Thomas Vanek, whose 254 goals rank fifth in franchise history, said the disappointment of falling a win short of the Stanley Cup final as a rookie in 2006 still eats at him.

“I don’t think that feeling will ever go away,” he said.

Many believe if the Sabres hadn’t lost four defensemen to injuries, they would’ve defeated the Carolina Hurricanes in the Eastern Conference final. Instead, they lost a memorable seven-game series.

The Sabres returned to the Eastern Conference final in 2007 but fell to the Ottawa Senators in five games.

“Afterwards I moved on and I had chances a little bit somewhere else,” Vanek said. “But … it didn’t feel the same even in other spots when I made the playoffs with other teams. That was one you always look back. Those two years in a row … would have made my life or my career very special.”

Vanek turned 39 on Thursday. The Austrian retired after spending the 2018-19 season with the Detroit Red Wings.

The Sabres, who begin a four-game road trip Monday against the Dallas Stars, had Friday off.