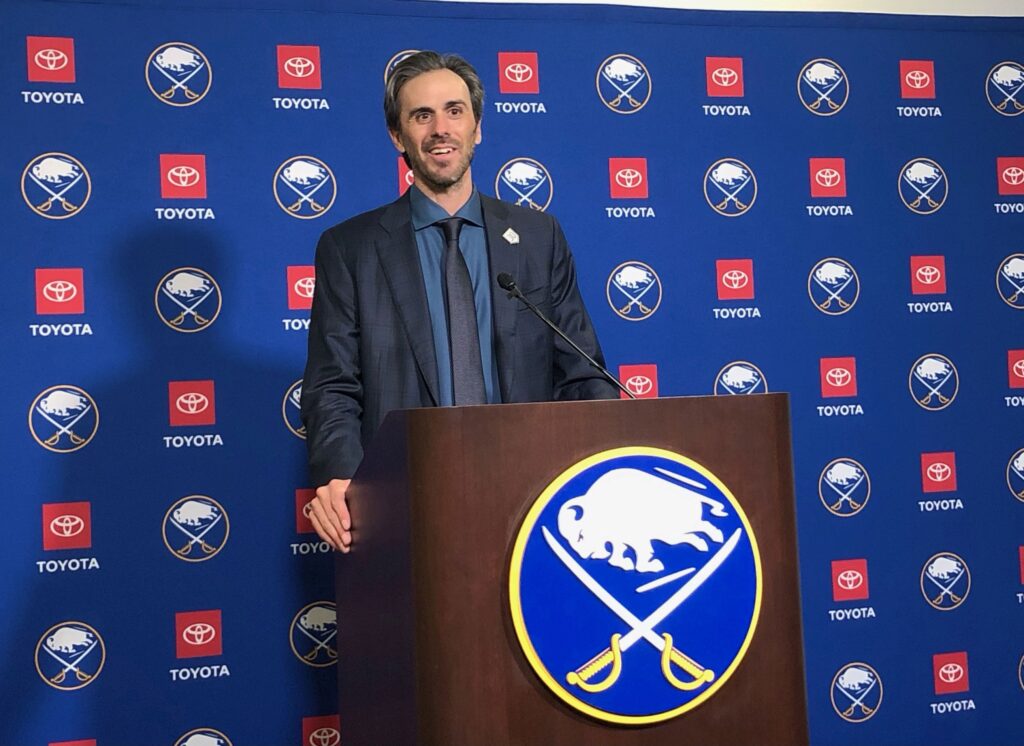 BUFFALO – It was only fitting, right? On a night the Sabres honored Ryan Miller by retiring his No. 30 and inducting him into their Hall of Fame, the goalies stole the show in the home team’s thrilling 3-2 overtime victory.

At one end, rookie Ukko-Pekka Luukkonen, the Sabres’ best young netminder since Miller in the early 2000s, made several game-saving stops. Meanwhile, New York Islanders goalie Ilya Sorokin made 19 of his 42 saves in the first period.

“On ‘Ryan Miller Night’ to have a goaltending performance that spectacular both ways was a lot of fun,” coach Don Granato said following just Sabres’ second win in the last seven games.

Luukkonen, who has won eight of his last 10 starts, made some critical saves that resembled vintage Miller, including a lunging stop in the third period. With seven seconds left in regulation, he stymied Anthony Beauvillier.

Then 12 seconds into overtime, center Dylan Cozens scored on a breakaway, connecting after Dahlin lofted a long pass to him from deep in the Buffalo zone.

“On a night like this when it’s full and they’re celebrating such an unbelievable player to this organization, Ryan Miller, you just want to win so bad,” Cozens said. “It really fuels us to win it for him on his special night and win it for all the fans who came.”

“We just kind of locked eye contact when I was curling and I just tried to get going as fast as I could,” he said. “He made a football pass to me, a little Hail Mary and I somehow managed to handle it.”

Following the game, Miller joined the Sabres on the ice for a photo, a final memory in a special night.

In 2002, Miller walked into KeyBank Center for the first time as a wide-eyed 22-year-old, and he spotted four banners of Sabres legends – Gilbert Perreault, Rick Martin, Rene Robert and Tim Horton – hanging from the rafters.

“And I had that little fantasy. I did,” Miller said during his ceremony. “I looked out there, I was like, ‘Wow, you know, I’m signing with a pro team. We got some banners up there, wouldn’t that be cool?’

“And this is an amazing dream-come-true situation.”

Miller’s the eighth Sabres player and second goalie to have his number retired, joining Dominik Hasek, who introduced him in a video before his induction.

As Miller reminisced about his decorated career and the Sabres’ post-lockout glory days with 18 former teammates beside him, he made sure he to point out the current edition of the team, which watched the emotional ceremony from the bench.

Naturally, Miller, the franchise’s all-time wins leader, still keeps close tabs on the Sabres. He likes what he sees, and he still sounds like he’s on the team.

“We might have something here, boys,” he said during an emotional pregame ceremony.

Following the ceremony, he said the Sabres, who haven’t made the playoffs since Miller backstopped them in 2011, “deserve some credit for making improvements.”

“All of them have a nice attitude and have an extreme amount of talent,” he said. “I’ve been watching a lot more hockey, obviously, so it’s been good to see. But, yeah, I would’ve liked to hear something positive coming our way.

“I think any little bit from the community helps get these guys going, feel good about themselves. They have a real good chance here to be a good team.”

Miller’s words have special meaning for the Sabres.

“It makes us very motivated, for sure,” Dahlin said. “The words he says, I know he speaks from his heart. It’s a special feeling when a legend says that about us. It’s cool.”

Luukkonen, who made 24 saves, said: “If he sees something special in this group, it’s a really good thing. It’s really, really good to hear from him, too, especially in the speech. I’ve said it before, we have a special group here.”

As the Sabres keep improving, they’ve thrived off the energy fans create for special occasions. Think of Jack Eichel’s return and “RJ Night.”

Thursday’s capacity crowd of 19,070 fans wasn’t as amped as some other recent notable games. Still, as the game progressed, it got louder and louder. It erupted when Sabres winger Victor Olofsson tied the game at 2 9:32 into the third period.

Brock Nelson scored 7:19 into the game, and the Islanders led 1-0 after one period despite being outshot 19-5.