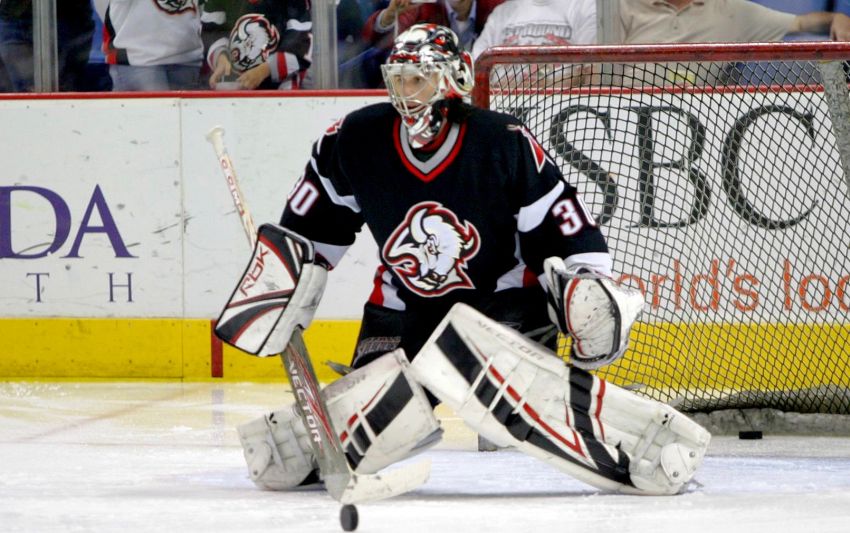 BUFFALO – Martin Biron remembers worrying about himself, not the arrival of Ryan Miller or any looming goalie battle, when the NHL lockout ended in 2005.

In 1999, the Sabres had used a fifth-round pick on a lanky American – “Took a flier on him,” former goalie coach Jim Corsi told the Times Herald – who would develop into a dynamic prospect.

“We drafted this young man, he was so skinny he had to run around the shower to get wet,” said Corsi, who will be in attendance to watch the Sabres retire Miller’s No. 30 and induct him into their Hall of Fame prior to tonight’s game against the New York Islanders at KeyBank Center. “Oh my goodness, he was just as thin as thin could be. Remarkable.”

By the 2005-06 season, following an illustrious career at Michigan State and a three-year apprenticeship in the minors, Miller was beginning a remarkable NHL career that would include a Vezina Trophy and Olympic heroics for Team USA.

Biron, however, saw Miller as another goalie, not a threat. Miller, then 25, had played 18 NHL games during his first two seasons, sometimes struggling while sharing time with Biron.

Once, when Miller allowed seven goals in an ugly loss to the Detroit Red Wings, he had tears in his eyes following the game. That was his last NHL appearance for nearly two years.

When the lockout wiped out the entire 2004-05 campaign, Biron occasionally watched Miller with the Rochester Americans.

As the NHL began a new era in 2005, implementing a slew of new rules to increase scoring and excitement, Biron was concentrating on his own game.

“This sounds selfish, I was a lot more worried about myself coming out of the lockout and saying, ‘OK, what do I need to do?’” he said. “We had to deal with all kinds of new rule changes to the game, a crackdown on hooking, holding and interference, and also the goalies, our equipment was different. We had the smaller pads, smaller gear. So there was a lot for me to process and put together.

“I was trying three different sets of equipment and pads. We were doing shootouts in preseason games. We had never done the shootout before.”

Well, Biron ended up having plenty of time to become accustomed to the new rules and equipment.

Miller won the goalie competition, and he played the first nine games that season. Biron did not start until Oct. 29.

“I was like, ‘What the hell’s going on here? I should be playing, too,’” Biron said. “And they wanted to test out the Ryan Miller thing.”

Noronen, meanwhile, was relegated to a distant No. 3, becoming a spare part. Sometimes, Biron said, the Finn wouldn’t even practice with the Sabres. He played six games before they traded him in March.

Biron figured after the Sabres gave Miller a look, things might go back to normal. But Miller was in his first of nine seasons as their starting goalie.

“They really tested him out and he played really well,” Biron said.

Miller earned the job, Corsi said, because he possessed an “ability to focus and confront the challenge.”

“Mika dominated the American League, came to the NHL,” he said. “He was the new body of the NHL (6-foot-2 and 199 pounds) as far as an NHL goalie. He was like big, strong, agile. Then there was something that Millsie had more on him.

“Marty was a technically sound, hardworking guy. Yet there were things that Millsie brought to the table that allowed him to be long-term more consistent, there was more of a dynamic in his game. It was really hard, as far as an organization, now with three really good goalies. Like, it was really hard.”

So what did Miller have over the others? Corsi said he would constantly push himself and evolve to hone his craft.

“Millsie had an ability to translate the curiosity into a skill,” he said.

“In any area of life, if you stop learning, you stop growing, and I think he knew that and I think he was always eager to learn,” he said. “And I think that was part of his greatness. He was humble enough to understand he didn’t know it all, he hadn’t hit the peak ever.”

One year, for example, Miller considered changing his stance, so he and Corsi went on the ice with cameras and string to measure the coverage.

“He was like the best goalie in the world at the Olympics and here he is trying to tweak his game, which was wonderful,” Corsi said. “That kind of curiosity – applied curiosity – was one factor. And the other factor that was he played hockey.”

By “played hockey,” Corsi means Miller processed the game like a skater.

“All good goalies have that,” he said. “Others are able to apply it in real time.”

That 2005-06 season remains one of the most memorable in franchise history. The Sabres, who boasted five rookies, roared out of the lockout, becoming the NHL’s biggest surprise. Their depth and skill was nearly unmatched throughout the league.

If they hadn’t suffered a run of injuries on defense during their rollicking run to the Eastern Conference final, they might’ve played for the Stanley Cup.

Biron would play a key role that season, winning 11 of his last 12 starts after Miller suffered a broken thumb in early November.

When Miller returned in mid-December, Biron figured the Sabres would keep riding the hot goalie, and he prepared like he was starting. Then he learned Miller would be playing Dec. 19.

“I was like, ‘What, he’s starting tomorrow? Nobody told me that!’” Biron said. “Like, I was so mad that I wasn’t playing. But looking back, I understand that at some point he needed to get back in the net. …

“That was only time that I felt like, ‘Dammit, like, I’m mad now. Who is this guy? I need to play!’ But lasted for just half a day and that was it.”