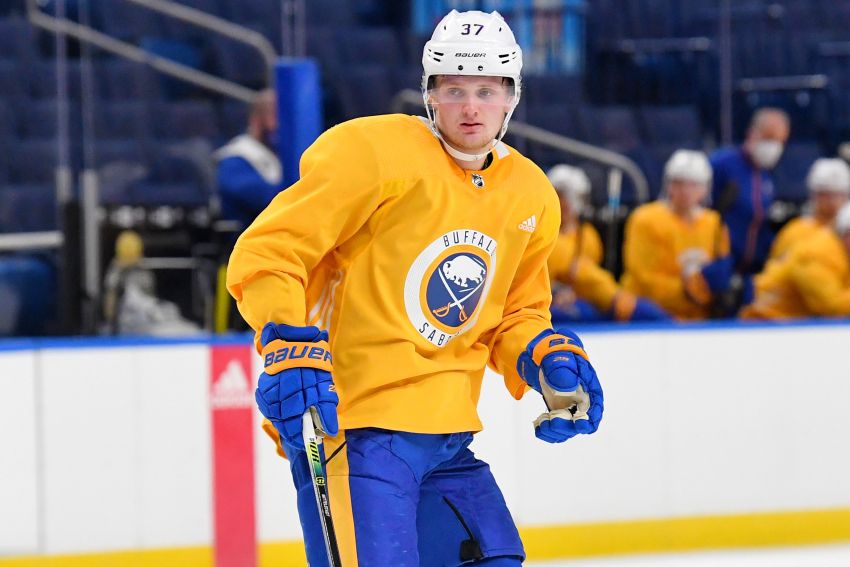 Before the season, the Buffalo Sabres developed a plan to rest some of their younger players. In occasionally giving them a breather, they want to prevent the physical and mental aspects of the NHL from overwhelming them. They also want to ensure members of their taxi squad have opportunities to play.

So on Sunday afternoon, two days after winger Dylan Cozens scored his first NHL goal, the Sabres loaned the rookie to the taxi squad and scratched him for their 4-3 shootout win over to the Washington Capitals. To replace him, they promoted winger Casey Mittelstadt from the taxi squad.

Why sit out Cozens, 19, just six games into the season and after he scored in Friday’s 4-3 shootout loss in Washington?

“Just in the plan,” Sabres coach Ralph Krueger said on a Zoom call prior to the game. “We had mentioned preseason that we want to keep the taxi-squad players active and we need to watch the load on some of the other players. Dylan is one of them, so he has an opportunity to take a breath and watch the game. Casey has been outstanding in his work so far since the first of January. We need to get him involved, too, so we get a read. So it’s a combination of events.”

The American started the game at left wing with center Eric Staal and Victor Olofsson before Krueger shifted him beside center Cody Eakin and Tobias Rieder.

“He looked really good on his feet,” Krueger said of Mittelstadt, who finished last season with the Rochester Americans. “I thought he was moving really well. It looks like the offseason has been good to him. We’ve loved him with the taxi squad, we liked him through training camp. He added a nice element to our game tonight, becomes a strong option when you look at how he walked into his first game after so long. He made good defensive decisions and reads.”

Krueger understands that in addition to the physical aspect, the mental challenges the long, arduous NHL season presents can be difficult for neophytes to handle.

“I saw last year just a few players check out mentally with too much of a load,” he said. “So it’s not just the physical side, it’s the mental side that we are weighing in on here when we make some of these moves.”

The Sabres made their first notable move Tuesday, promoting Rasmus Asplund from the taxi squad to replace winger Tage Thompson, who also sat out Sunday. They returned Asplund, 23, to the practice group after their 3-0 road loss to the Philadelphia Flyers.

Krueger said a day between games offered the Sabres an opportunity to examine whether it would be a good time to scratch Cozens. The Yukon native spent nearly two months with Team Canada before arriving in Buffalo earlier this month.

The Sabres, for example, study the sports science data for each player. Kruger said that was one of many factors that went into the decision.

“It just felt like a good time for Dylan to take a breath and for us to put in a teaching block and an office fitness block,” he said. “We are respecting the load he had before. But to tell you the truth … I would say nothing is really set in stone at all and flexibility continues to be a spontaneity with a plan in place, but with the ability to be able to change directions if we feel this is what this game needs.”

Sabres winger Kyle Okposo said Jan. 12 wasn’t a good day for him. When the veteran tested the lower-body injury he suffered during his last shift in Buffalo’s second scrimmage three days earlier, he had to leave practice early.

“To come to the realization that after 10 months of not playing hockey I wouldn’t be ready to start the year, that was hard,” Okposo said following Thursday’s practice at KeyBank. “But I guess you have to take a macro view and it’s a long sprint basically, so I wanted to make sure I took care of it and got to where I needed to be where I can help my team.

“Definitely a hard thing to not be there at the beginning.”

Okposo, 32, finally made his season debut Sunday after missing the first five games.

He began the day at right wing beside center Eakin and Rieder before Krueger moved him to the second line with Staal and Taylor Hall.

Krueger mixed up his top two lines late in the game, moving Victor Olofsson from right wing beside Staal to left wing with No. 1 center Jack Eichel and Sam Reinhart. Hall had spent all season with Eichel.

Krueger said he wanted to spread out his scoring talent.

“The block of five that Washington was putting out to neutralize the Eichel line is absolutely a premier defensive unit in the National Hockey League against anybody,” he said “To relieve some of that pressure it was better to move some pieces around. We also needed some freshness. We haven’t been that effective five-on-five on our scoring for the opportunities that we’ve had.

“Sometimes moving the lines around within our system, because we really don’t change our principles no matter who we’re playing or where we’re playing, guys can step in and move left to right a lot easier than in some other forms of play. It was good for the group today. I thought they reacted well. It is an option we can use in the future.”

One thought on “Sabres notes: Ralph Krueger explains why Dylan Cozens was scratched”