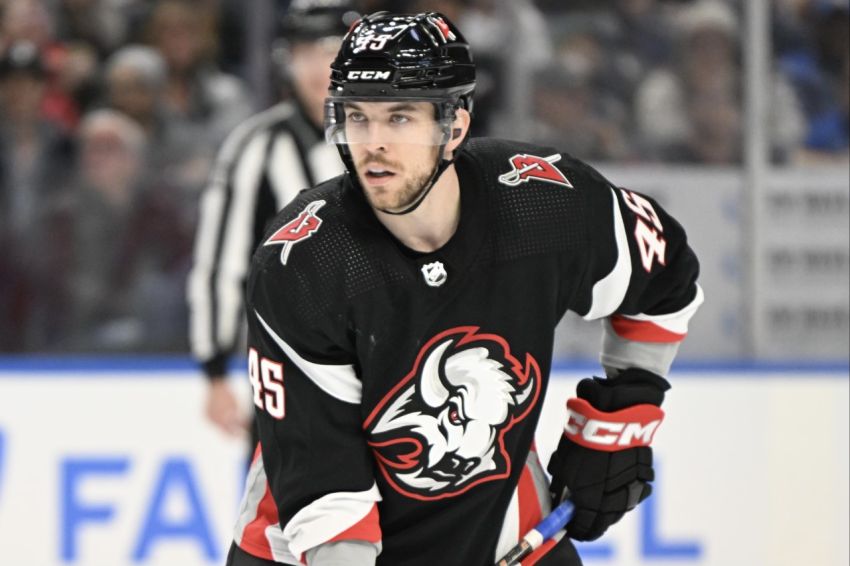 BUFFALO – Given the depth the Sabres have built up over the last year, losing someone on waivers seemed inevitable. Sure enough, on Wednesday, the Florida Panthers nabbed defenseman Casey Fitzgerald off the wire.

As a 25-year-old right-shot defenseman, the chances of Fitzgerald clearing seemed low.

On Tuesday, the Sabres waived Fitzgerald to create a roster spot for defenseman Henri Jokiharju.

Defenseman Kale Clague recently passed Fitzgerald on the depth chart, and he sat out seven straight games as a healthy scratch.

The 5-foot-11, 188-pound Fitzgerald compiled three assists, a minus-1 rating and four penalty minutes in 23 games with the Sabres this season.

Buffalo drafted Fitzgerald in the third round in 2016, 86th overall. He turned pro in 2019 following his senior season at Boston College and spent parts of four seasons with the Rochester Americans before making his NHL debut on Dec. 17, 2021.

Fitzgerald compiled zero goals, nine points, a minus-20 rating and 40 penalty minutes in 59 career games with the Sabres.

The Sabres host the Panthers, their Atlantic Division rival, on Monday afternoon.

Fitzgerald’s father, Tom, was an original member of the 1993-94 expansion Panthers and played five seasons for them. Tom Fitzgerald is now the New Jersey Devils’ general manager.

The Sabres’ defense depth has been tested as they’ve endured injuries. Through 39 games this season, they’ve used 10 defensemen. Right now, however, everyone is healthy.

Clague’s recent emergence – he has been skating over 17 minutes some games – pushed Jacob Bryson out of the lineup for Tuesday’s 4-3 loss to the Seattle Kraken.

The Sabres, who host the Winnipeg Jets tonight at KeyBank Center, need to clear a spot on the 23-man roster if they want to recall goalie Ukko-Pekka Luukkonen for the game.

In a paper move on Monday, they sent Luukkonen, who has won six straight starts, to the minors to activate goalie Eric Comrie from injured reserve. The Finn never left the team and was expected to start on Tuesday before showing up at the rink sick.

Comrie replaced him, making 18 saves in his first start since Nov. 16.

Even if Luukkonen feels better, Comrie could start again. That would buy the Sabres another day or two make a move. Comrie played 24 games for the Jets over parts of four seasons, including 19 last year.

Sabres center prospect Brandon Biro, whose 20 assists and 29 points both lead the Amerks entering Wednesday’s game, has been named an AHL All-Star.

The 24-year-old ended December on a tear, registering four goals and 13 points during a seven-game point streak.

Biro, a free agent the Sabres signed out of Penn State in 2020, played his first NHL game last season.

The AHL All-Star Game is Feb. 6 in Laval, Quebec.

The Sabres’ regular season has been extended one more day.

The road game originally scheduled for Dec. 27 against the Columbus Blue Jackets has been rescheduled for April 14 at 7 p.m. at Nationwide Arena. They were supposed to close the regular season on April 13 at home against the Ottawa Senators.

Severe winter weather that decimated Buffalo and closed the airport forced the game to be postponed.