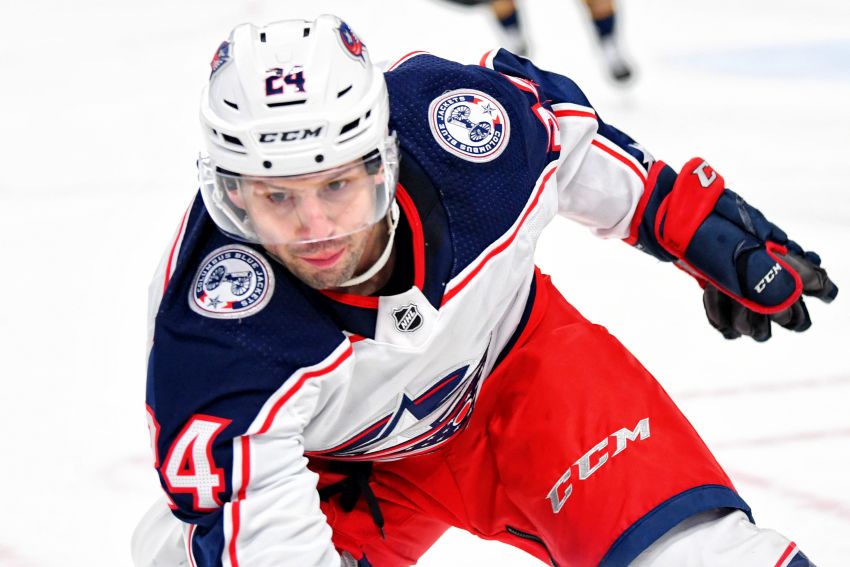 BUFFALO – At first, learning the Columbus Blue Jackets had recalled him upset Nathan Gerbe a little. The former Sabres winger had just arrived home in Michigan for a short Christmas break from the Cleveland Monsters.

The affable Gerbe, 32, wanted to see his family. Instead, on Dec. 22 he hurried to Long Island for the Blue Jackets’ game the next day against the New York Islanders.

“I hadn’t seen them in a while,” Gerbe said prior to Saturday afternoon’s 2-1 overtime loss to the Sabres inside KeyBank Center. “So at first, I was a little, like, yeah, upset. Once I was able to think about everything I was ready to go.”

A dearth of healthy forwards forced the Blue Jackets to summon Gerbe on an emergency basis, his first trip to the NHL in nearly two years.

“I’ve been waiting for this opportunity and very thankful to get it,” said Gerbe, who scored in his season debut. “I was sad but I was also happy. So I was kind of going through a whole mix of emotions there.”

Six weeks later, the 5-foot-4 Gerbe, an aggressive presence who possesses skill, is still in the NHL. The American has enjoyed regular duty, compiling three goals and eight points while playing 16 straight games. The Blue Jackets have an 11-2-3 record with him in the lineup.

He added: “I just love being around him.”

Gerbe, who played his 400th NHL game Dec. 31, has become one of hockey’s best comeback stories.

At the beginning of 2016-17, Gerbe bolted for Switzerland, where he spent a season and a half with Geneve Servette.

Leaving for Europe in your late 20s usually signals the end of your NHL career. Still, after the Blue Jackets signed Gerbe midway through 2017-18, he played two games with them.

But Gerbe, who spent parts of five seasons with the Sabres, settled into a veteran role in Cleveland, captaining the Blue Jackets’ AHL affiliate.

The genesis of Gerbe’s career turnaround started about a year ago, when he underwent double hernia surgery and also had “a pretty major tear” in his right labrum repaired.

“I just couldn’t do it anymore,” said Gerbe, who had been dealing with problems for at least six years. “Yeah, I was in pain. It had to get done.”

Gerbe, who rehabbed for about six or seven months, said he feels “younger and better than I did four years ago.”

“It wears on you mentally, it wears on you physically,” he said of playing injured. “Just getting healthy and to be able to skate the way I know I could, yeah, I think that’s huge. I know I can skate, but when I’m healthy I can really skate.”

For Saturday’s national anthems, the Blue Jackets honored late Los Angeles Lakers superstar Kobe Bryant by having Gerbe, who wears No. 24, stand to the right of defensemen Zach Werenski, who wears No. 8.

The rest of the Blue Jackets stayed on the bench.

Bryant, who was killed in a helicopter crash with his daughter, Gianna, and seven others Jan. 26, wore those numbers during his 20-year career with the Lakers.

“I’d say it’s more in the weeks category,” Krueger said prior to Saturday’s game. “We’ll probably be confirming that later today after the game. I don’t just expect him in the near future, but also not the very long future.”

In other news, a lower-body injury made defenseman Brandon Montour a late scratch after he skated in warm-ups. Montour had a maintenance day from Friday’s practice.

“We definitely didn’t want to risk what he was feeling to put him in the lineup today,” Krueger said. “Pilut came in last minute and did an excellent job on that short notice.”

Notes: Krueger said defenseman Zach Bogosian, who has been sick, is “feeling a little bit better.” Bogosian missed Saturday’s game but planned to work out. … The Blue Jackets played their first game following their bye. … The Sabres are 5-1-0 in afternoon home games this season.