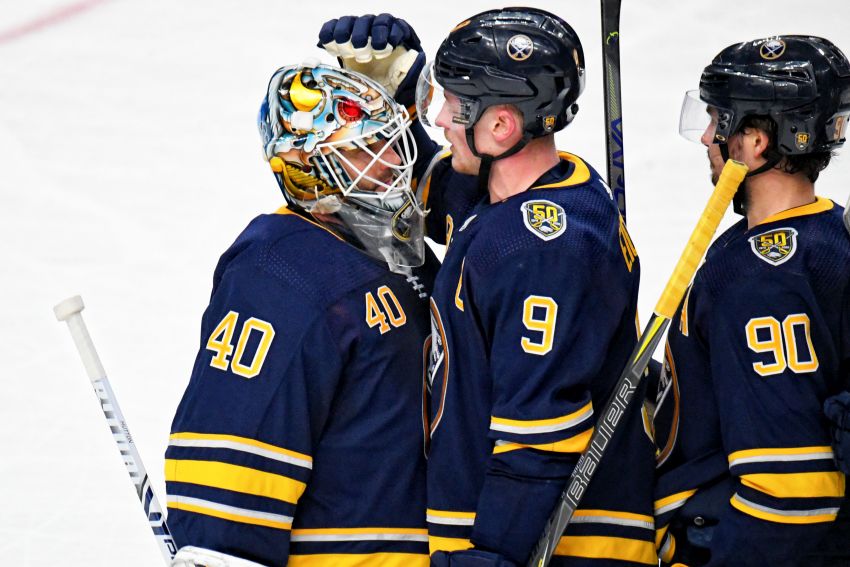 BUFFALO – For 60 minutes against the Columbus Blue Jackets, Sabres captain Jack Eichel blended in, generating little offense against one of the NHL’s stingiest teams.

When overtime began Saturday afternoon, Eichel hadn’t registered a shot on goal, a rarity during a dynamic season in which he has morphed into a superstar.

“I thought a little bit there he was fighting it,” goalie Carter Hutton said after Eichel’s goal 36 seconds into overtime secured a 2-1 win, his first victory since Oct. 22.

The Sabres, who ended the Blue Jackets’ six-game winning streak, had been fighting an ugly two-game home losing skid. Fresh off Tuesday’s 5-2 loss to the Ottawa Senators, the Sabres responded with a hapless offensive display in Thursday’s 3-1 setback to the Montreal Canadiens.

A livid Eichel ended Thursday’s game by taking a baseball swing at the goal post, breaking his stick after the Canadiens’ empty-net goal.

The Sabres sorely need points to charge back into the playoff chase, and they blew two home games against weak opponents last week.

Eichel ended Saturday’s contest before the crowd of 17,650 by celebrating his seventh game-winning goal.

“The brilliance of Jack getting us the win in overtime, it’s a good psychological boost for us,” Sabres coach Ralph Krueger said. “But for us, it’s more about the habits. We love the habits today through the game on both sides of the puck.”

The three-on-three overtime format, of course, creates time and space for the NHL’s top talents.

After being stymied all afternoon, Eichel skated into the Columbus zone, moved to the right circle and used defenseman Seth Jones as a screen before unleashing a wicked wrist shot high past goalie Matiss Merzlikins.

“Just a good lane of shooting, trying to test the goalie,” Eichel said. “I thought we pushed him back a little bit, a lane opened up trying to use the guy as a screen a little bit.”

“That goal, he kind of waits, waits, waits and his shot is so lethal that he can beat a goalie from the top of the circles,” said Rodrigues, who opened the scoring 16:08 into the game. “I think that’s the biggest key for him this year, is that he’s shooting the puck more and pretty much shooting it every chance he gets.”

The genesis of Eichel’s goal started when center Curtis Lazar won the opening faceoff before zooming off the ice for winger Sam Reinhart.

Possession is critical in overtime, and Lazar’s win allowed the Blue Jackets to never touch the puck.

“That (goal) probably doesn’t happen without that faceoff win,” Eichel said. “It’s a huge play by him.”

Krueger has utilized Lazar’s faceoff skills before to begin overtime. On Saturday, Krueger said Lazar won four of his last five draws down the stretch.

“Curtis really dug in there and … that’s just a nice team injection from Curtis which we’re really pleased about because he’s one hell of a team player,” Krueger said.

Lazar said: “It’s a small thing, but it pays off, especially in overtime.”

It also paid off in helping Hutton end his marathon 12-game losing streak (0-8-4).

After Eichel’s goal, the Sabres raced to congratulate Hutton, a popular teammate.

“It was good on the group to recognize,” Eichel said. “For one, he’s an unbelievable teammate, loved in the room. Obviously, it’s tough when that happens, but we haven’t played that well in front of him defensively. There’s nights when he has been really good. We haven’t given him enough support in terms of goals.”

Since replacing injured goalie Linus Ullmark late in Tuesday’s game, Hutton has performed splendidly, compiling a 1.42 goals-against average and a .946 save percentage.

“Like I’ve said a few times, there’s obviously a lot more going on than what everyone knows with the information and stuff,” Hutton said. “But I just try to stick with it. I’ve played for a long time here. It wasn’t like I just fell off a cliff here. There’s a lot of things that go into this.”

“We’re not surprised but we’re so pleased for him to see him have performances like this when the team desperately needed it,” he said. “Good on him, he’s such a character in this group and he’s a real leader and a voice all the time whether he’s starting or not.”