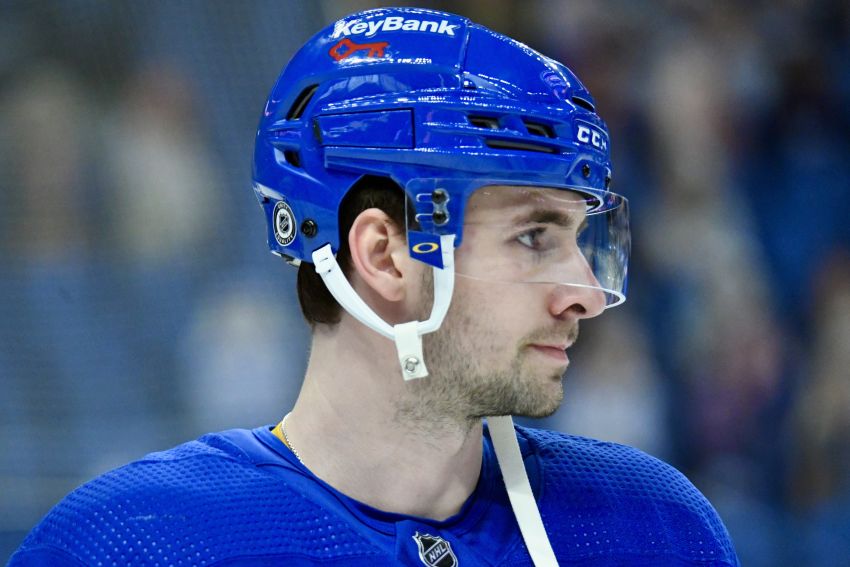 It was one of those so-called little plays that was really huge. In the second period of Monday afternoon’s 3-2 overtime loss, Buffalo Sabres defenseman Mattias Samuelsson tied up Lucas Raymond near the net.

While the Detroit Red Wings forward managed to shoot the puck, Samuelsson stymied him enough to nullify what would’ve been a terrific scoring chance.

“I feel like that’s always been my style,” said Samuelsson, who was recalled Monday morning. “I’m not a flashy player, obviously, that people notice little things.”

“He was good,” Sabres coach Don Granato said of Samuelsson on a Zoom call. “He was the least of our worries, that’s for sure. He’s a pretty stabilizing guy, obviously. A big body. We’ve used (Alex) Tuch and (Tage) Thompson on the penalty kill because they just cover so much ice and have range. Samuelsson has such a presence with his size and reach and strength.

“It’s his first game at this level in quite a while and I thought he did a nice job with it.”

The Sabres recalled Samuelsson from the Rochester Americans because Granato said defenseman Colin Miller has been dealing with a nagging injury.

Samuelsson, the 31st overall pick in 2018, was expected to contend for a roster spot during training camp this year, but he suffered a lower-body injury blocking a shot during a rookie camp game Sept. 17. He did not play again until Nov. 3 with the Amerks.

When the Sabres needed defensemen last month, Samuelsson was in the AHL’s COVID-19 protocol.

“He’s intense about his development, he’s very focused and driven, a development mindset,” Granato said prior to the game. “He was good in the rookie tournament. Only one game, but he was pretty dominant in that one game. And he’s been really good down in Rochester. So we’re excited to see him.

“I thought he was real effective and good for us late last season. Unfortunately, he had some injuries and illnesses to deal with, or he might’ve been here sooner.”

Samuelsson has compiled two goals and 15 points in 20 games with the Amerks this season.

“Playing in Rochester to start the year you definitely gain some confidence,” Samuelsson said. “I was able to play in all situations there and be a big part of that team.”

The Sabres, having lost Jacob Bryson to an upper-body injury in Saturday’s 4-0 loss in Detroit, are down two of their top-six defensemen. Will Butcher returned Monday after sitting out as a healthy scratch.

The Sabres on Monday also reassigned defenseman Casey Fitzgerald from the Amerks to the taxi squad.

Granato said Girgensons and Miller were being examined by doctors on Monday.

Miller, who recently missed three games with an injury, practiced on Sunday.

“He felt it more and more progressively the last few days,” Granato said.

Granato said Sabres winger Drake Caggiula, who was practicing in a non-contract role before leaving last week, hasn’t suffered a setback. An upper-body injury has sidelined Caggiula the last 19 games.

“It just hasn’t made the next step,” Granato said of the injury. “They’re trying different things to get him to the next step, I guess, is probably the best way to look at it.”

Notes: Sabres center Peyton Krebs played his first game Monday after leaving protocol. … Every Sabre made it to KeyBank Center on Monday morning as a snowstorm battered the region. “We’re all in hockey, it’s actually nice to see this stuff,” Granato said. … The Sabres play a road game tonight against the Ottawa Senators.