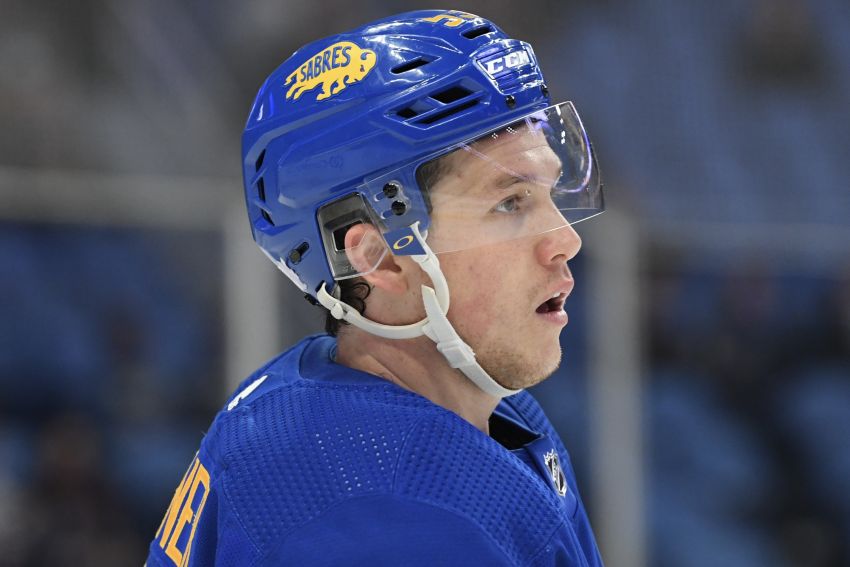 Not only did the Buffalo Sabres go up 2-0 when winger Jeff Skinner scored almost halfway through Monday afternoon’s third period, the Detroit Red Wings received a bench minor for their failed goalie interference challenge.

And that’s when the Sabres, who have lost an NHL-high seven games this season when leading after two periods, began to unravel.

“We just scored a goal to go up 2-0, you’re on a power play and we didn’t manage the situation well,” coach Don Granato said on a Zoom call following the Sabres’ 3-2 overtime loss.

Vladislav Namestnikov scored a short-handed goal at 10:21, exactly one minute after Skinner’s tally. Then Dylan Larkin recorded the first of his two goals at 13:28, stunning the announced crowd of 8,839 fans inside KeyBank Center.

Larkin scored again 2:07 into an overtime in which the Sabres barely possessed the puck.

“We had the lead, we had a power play and we have to find a way to close those games out,” said Skinner, who scored his team-leading 14th goal.

“As simple as that,” he said. “At some point, you gain the situational awareness to have a greater sense of objective. The last thing we should be doing is complicating things on the power play at that point. It should be simple and direct. The pain of it is something teams grow out of.”

The Sabres haven’t grown out of their overtime struggles, either. They’ve lost six games in overtime this season, including three against the Red Wings, another rebuilding team in the Atlantic Division.

Right now, the Red Wings, who won just 19 of their 56 games last season, four more than the Sabres, have earned 12 more points than Buffalo.

The Red Wings swept the season series from the Sabres, winning all four games. If the Sabres want to go anywhere in the future, they need climb over a lot of teams, including the Red Wings and others they might measure themselves against.

“You play the top teams and you don’t have to stress over mistakes,” Granato said. “I felt like we played tighter (against Detroit). I thought we played harder than we did the other night, but we played tight. I think that’s part of it. You kind of know in the back of your head this is a team where you’re kind of in the same slot in the league, a young team that’s growing and searching for an identity.

“We felt the way we reacted in some situations that ordinarily we have more confidence and composure, we didn’t. We were tight, especially after the first goal that we gave up.”

Despite losing for the eighth time in the last nine contests (1-5-3), the Sabres generated some positives Monday, looking much better than they did during Saturday’s 4-0 loss in Detroit.

“We were more on our toes,” Skinner said. “We were able to get pucks in deep and play maybe more simple. That allowed us to play more in the offensive end.”

Defenseman Henri Jokiharju opened the scoring 9:56 into the game. But the Sabres, who pumped 26 shots on Red Wings goalie Alex Nedeljkovic, failed to convert some prime chances, including breakaways from winger Victor Olofsson and Alex Tuch.

“We played a pretty good game,” Granato said. “Just didn’t finish. Just didn’t have a finish. It was a much, much better effort.”

“Deller played really well and bailed us out a couple times,” Tuch said. “But we didn’t play well. We came up short, it’s disappointing. … We let our goalie down.”

The Sabres play a road game tonight against the Ottawa Senators.

One thought on “Sabres blow late lead, lose in OT to Red Wings: ‘We let our goalie down’”