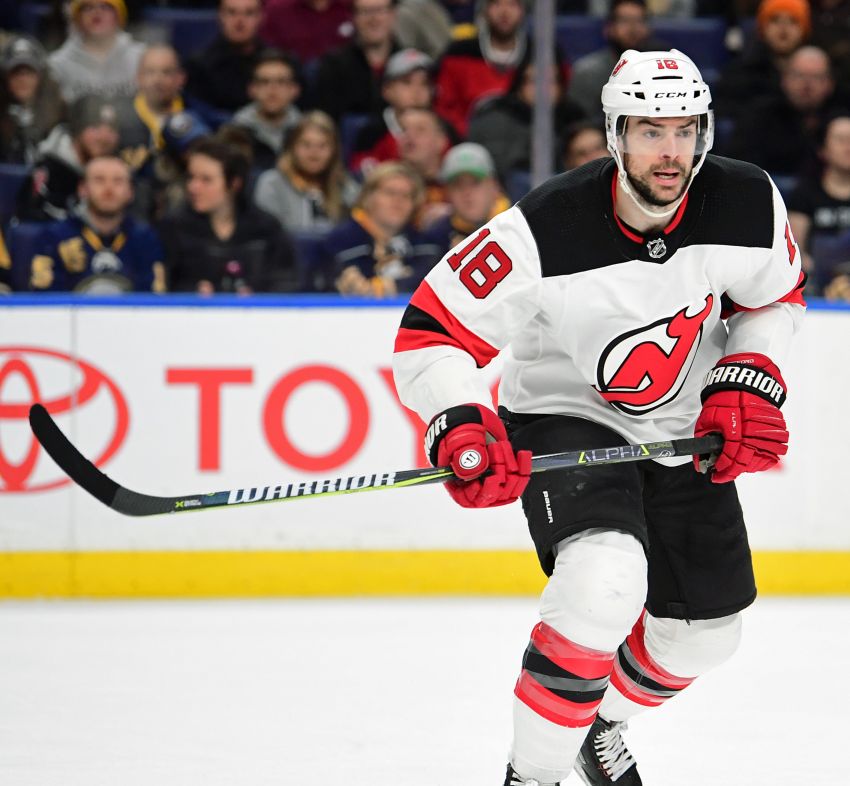 BUFFALO – Evolve and adapt, Drew Stafford said. That’s why at 32, an age that often signals the end of an NHL career, the former Sabres winger is enjoying his 12th season.

“You have to or else, the way the game goes, guys are out of jobs or teams move on,” Stafford said Tuesday prior to the New Jersey Devils’ 3-1 win inside KeyBank Center. “There’s always a bunch of changing pieces.”

Stafford just changed teams three times in a six-month span. After playing for the Winnipeg Jets and Boston Bruins last season, the Devils signed the former 30-goal scorer to a one-year, $800,000 contract Aug. 25.

As the late signing indicates, Stafford is starting to gray. He just endured an 18-game goal drought. New Jersey scratched him seven straight contests around Christmastime.

“At this point, I’m definitely someone who can play up and down the lineup, play any kind of role, a top-six type of role, an offensive role,” said Stafford, who has compiled seven goals and a minus-14 rating in 38 games. “I feel like I still have that part of my game.”

But Stafford mostly skates on the third or fourth line, a role he embraces.

“I can provide solid minutes on the ice as well as be just a reliable veteran presence in the lineup,” he said. “I’ve been through a lot, I’ve seen a lot. I know that a lot of the younger guys here are comfortable talking with me. …

“It’s little things like that I can provide to the team on a daily basis. I think there’s tremendous value in that.”

Leadership might be the affable Stafford’s greatest asset. He has experienced a little bit of everything, roaring into the NHL in 2006-07 on a Presidents’ Trophy-winning team and leaving Buffalo in 2014-15 in the midst of the Sabres’ second consecutive 30th-place finish.

In between, the former first-round pick was often the Sabres’ top offensive threat.

Stafford is proud of the Devils’ revival this season. While they began Tuesday with four straight losses, with 56 points, they owned one of the Eastern Conference’s wild card spots.

“One of the goals was to become a relevant team in the league again,” Stafford said. “We had a great training camp. We kind of established a new kind of foundation and a mindset that carried over.”

Instead of playing vanilla, defensive hockey like past Devils teams, they showcase a slick, up-tempo attack.

“When we’re playing to our identity, it’s fast-paced, it’s tenacious on the forecheck, kind of suffocating style where we really don’t give teams a lot of space,” Stafford said.

Of course, Stafford, whose wife, Hali, gave birth to twins last year, wants to keep playing as long as he can. Only four Devils are older than him.

“I feel like I have a lot more to give and I have a lot more left in the tank,” Stafford said. “I’m very, very excited to be a part of something. I think we got a great group here. We have an opportunity to do something pretty special here. We exceeded expectations. I feel like going into the season a lot of people might’ve written us off.”

He added: “Here I can be a part of the solution as far as steering the ship back on course.”

A commitment to a 200-foot game, not his scoring prowess, helped Sabres winger Nick Baptiste earn another recall last week.

“It was a play where we made them turn the puck over,” Baptiste said Tuesday morning. “I was able to use my speed, jump through a hole and create an opening.”

Center Jacob Josefson was also scratched again. Sabres coach Phil Housley said the Swede has recovered from his lower-body injury but must wait his turn.

Notes: The Sabres honored Team USA general manager Jim Johannson, who passed away Jan. 21, with a video tribute and a moment of silence prior to the game. … Linesman James Tobias, a West Seneca native, worked his third NHL game and first in Buffalo.