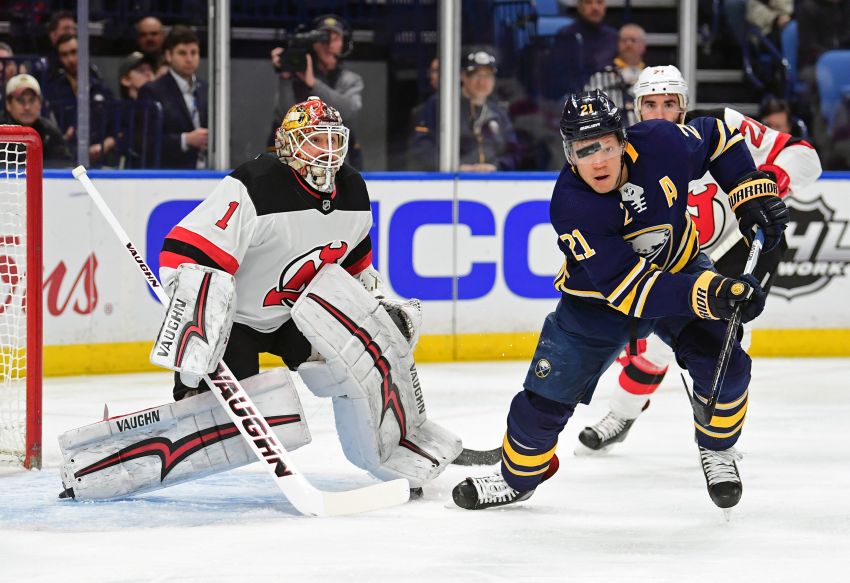 BUFFALO – Now back to reality.

Fresh off three straight road wins in which they outscored their opponents 11-1, the Sabres, looked like, well, a 30th-place team at home again Tuesday, losing a 3-1 clunker to the New Jersey Devils.

Instead of showcasing what made them successful during their best road trip in years – the Sabres allowed zero even-strength goals – they reverted to their old form, dropping their 16th home game in 22 tries (6-13-3).

“I would’ve thought they’d have confidence coming off the road trip and build off that and realize what it took to win three games and not give up an even-strength goal,” Sabres coach Phil Housley said.

What changed Tuesday before an announced crowd of 17,460 inside KeyBank Center?

“The road trip we were loose,” Sabres center Ryan O’Reilly said. “We just started with a fresh mindset and had a job to do and went out and did it. We were overthinking things (Tuesday), we were waiting for the game to happen.”

Housley said: “We didn’t process fast, we didn’t play fast, and as a result they looked faster. Give them credit, there’s a reason why they hold the first wild card spot.”

Right now, with only 37 points, the Sabres hold a lottery pick. If they were even an average home team, they might be sniffing a playoff spot.

“We want to bring that hockey that we showed we can play out west to this arena and for our fans,” said defenseman Jake McCabe, who scored the Sabres’ only goal. “You guys saw that we can play that way and we all see it too, so we need to play that way for our fans and for this city. Tonight’s unacceptable.”

Tuesday kicked off a five-game home stand. The Sabres play 19 of their final 32 contests at home. They have a chance to morph into a strong home team down the stretch.

The Sabres regularly look tight, even uncomfortable, in their own rink.

“I feel personally, I think it’s a little heavier, not as light, kind of overthinking things and not enough just kind of going playing the game,” O’Reilly said of home efforts. “It’s something we have to figure out soon. We have a good chance here. We have a lot of games at home coming up.”

Sabres center Jack Eichel said: “I don’t know if we get uptight. I’m not really sure what it is. Maybe we are looser on the road. Maybe we feel a little more pressure to perform here, and obviously when things aren’t going well you start thinking about it.”

Despite a weak effort, the Sabres hung around. McCabe’s power-play goal 14:58 into the third period narrowed it to 2-1. Then with about 90 seconds left and the Sabres up two skaters, New Jersey goalie Keith Kinkaid’s left pad stymied O’Reilly point-blank.

“We found a way to get back in the game,” Housley said.

“We knew what they bring,” McCabe said. “They check hard, they skate, they’re a really fast team. They’re always on top of you, always in your face. We weren’t ready to make that next play, and they won a lot more battles than us. Our inconsistent play tonight, you saw the result.”

Housley said: “This is our home ice. We should have the total urgency to come back off a road trip.”

“There’s honestly not many guys when he’s moving like that that can stay with him,” Devils defenseman Andy Greene said of Wood, the son of former Sabres winger Randy Wood.