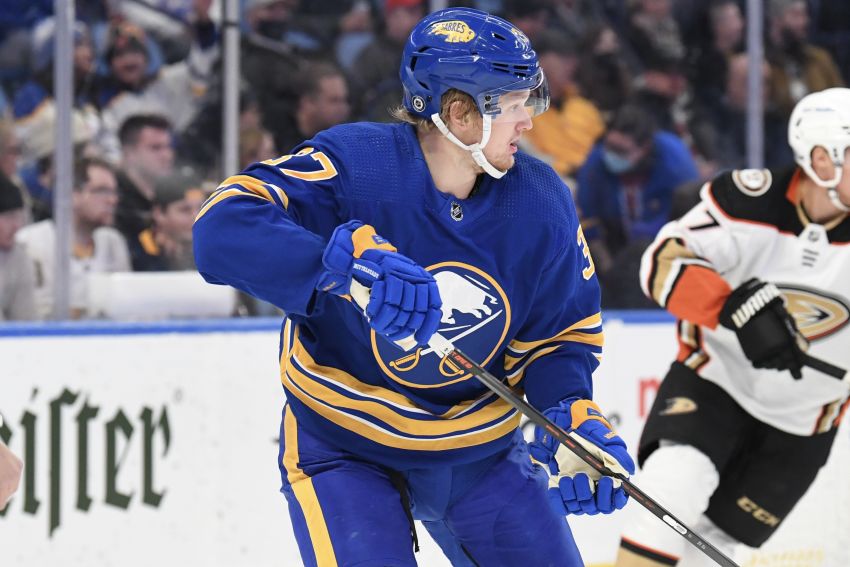 After going down opening night, he sat out 21 straight games. Then in his third contest back, he sustained another injury in the same area and has been sidelined the last 15 games.

Now, Mittelstadt, who underwent surgery Dec. 10, is close to playing again. He skated with his teammates prior to Thursday’s 5-4 loss to the Dallas Stars and could return Saturday afternoon or Tuesday, coach Don Granato said.

“Big thing is to get him integrated in practice, see where he’s at,” Granato said Thursday morning inside KeyBank Center.

Mittelstadt, who earned the No. 1 center spot in training camp, said his injuries have helped offer him a fresh mindset. When he returned Dec. 2, he felt the adrenaline that accompanies playing and being around your teammates again.

“Then it gets taken away from you,” he said. “I think it puts things into perspective. Sometimes you get stuck during the year and you’re playing so many games and you’re like, ‘Oh, my gosh, playing again, playing again,’ but then, man, when you don’t get to play, it’s hard. It (stinks). I’d be lying if I said it didn’t (stink). Different perspective from that and, obviously, I know now to not take it for granted.”

Granato said Mittelstadt, having had surgery, possesses a new level of confidence.

“He’s been aggressive,” Granato said of Mittelstadt’s rehab. “He … had a situation where you could rehab and play through it, and, obviously, the hope of that didn’t pan out the way it was. …

Mittelstadt said: “It’s a huge peace of mind to know we’re going to get back to 100 percent here.”

The Sabres listed a whopping 11 players on the injury report the team released Thursday. Some new updates from Granato are below.

Subban and Luukkonen are two of a whopping 11 Sabres listed on an injury report the team released Thursday. Some new updates from Granato are below.

– Winger Kyle Okposo is week to week after suffering an upper-body injury when Erik Brannstrom knocked him into the boards in Tuesday’s 3-1 win over the Ottawa Senators.

“He’ll plow through this I’m pretty certain pretty quick,” Granato said. “But he’s dealing with some bumps and bruises from the game the other night that need to be worked their way out.”

Granato said Okposo, who has a scary history of head injuries, doesn’t have a concussion.

“You know what he goes through or has gone through,” he said. “That was a hold your breath moment, I think, for lots of people there.”

– Granato said defenseman Colin Miller will be out at least six weeks after undergoing surgery to repair an upper-body injury. Miller, 29, has missed the last three games.

– Granato said winger Vinnie Hinostroza will be out a minimum of three weeks with an upper-body. Hinostroza, 27, has missed the last two games.

Notes: The Sabres sent winger Brett Murray to the Rochester Americans before the game. … Sabres assistant coach Jason Christie has left the NHL’s COVID-19 protocol. … With Girgensons and Okposo out, defenseman Rasmus Dahlin wore an ‘A’ as an alternate captain. “It was an honor,” Dahlin said. “It means a lot. I’m just trying to be myself and work hard every day.” Defenseman Mark Pysyk started wearing a letter when Girgensons left the lineup.