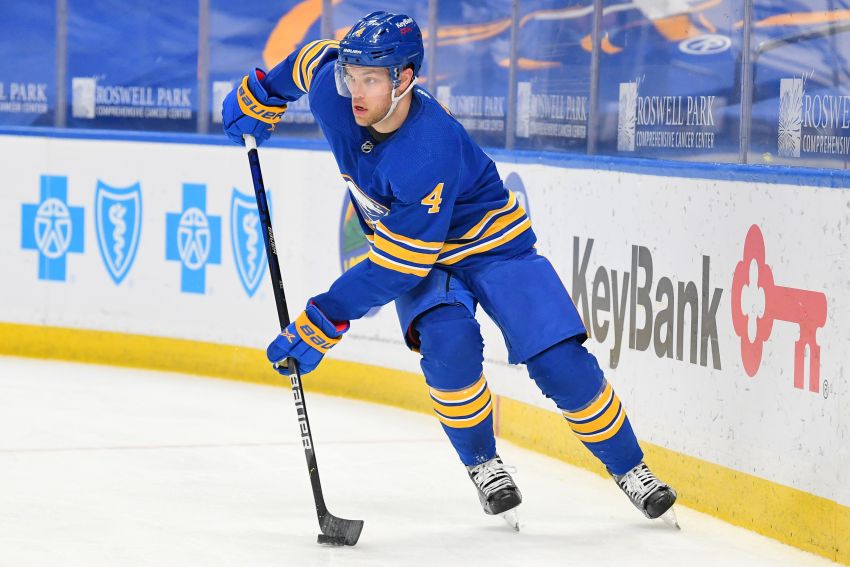 For the first time in more than 259 minutes of play, Buffalo had finally seized the lead.

“Guys were just like, ‘Wow, when was the last time this happened?’” Krueger said on a Zoom call after the Sabres defeated the New Jersey Devils.

It hadn’t happened since Jan. 30, when winger Victor Olofsson’s goal midway through the third period put them up 3-2 over the Devils.

Not coincidentally, that game, a 4-3 home shootout victory, was also the Sabres’ last win before Saturday’s at the Prudential Center.

The Sabres went into a tailspin after that triumph, dropping four straight games. So Miller’s goal 5:26 into the contest, the Sabres’ first five-on-five score in four games since their COVID-19 pause ended, infused some much-needed confidence.

“You could feel without anybody saying too much that it really relaxed the group and could settle into the game that we wanted to play,” Krueger said.

Winger Sam Reinhart scored two second-period goals, including one on the power play, to help the Sabres build a 3-0 lead.

Despite the close margin, Saturday was the Sabres’ best all-around effort since they shellacked the Flyers 6-1 on Jan. 18 in Philadelphia.

Since returning Monday, the Sabres had lost three games, scoring just two goals. Still, throughout the week, Krueger, Hall and some players insisted their game wasn’t broken and a few fixes would get them going.

So what changed Saturday?

“Not much changed,” Hall said. “I think we saw some pucks go in, we got a lead in the first period, we had a guy (Reinhart) go to the front of the net and screen the goalie and made it hard on him.”

Right away, Hall said the Sabres “were connected as a group.”

“D and forwards were making plays,” he said. “There weren’t a lot of bobbled pucks, there weren’t a lot of guys rushing plays or just giving the puck up to another guy hoping he would make a play. We were enforcing just our style of play on the game and it was evident right away.”

After the Devils roared back and scored two third-period goals, the Sabres held tight. Just before time expired, Miller blocked a shot in from of goalie Linus Ullmark to help preserve the win.

“I was very pleased with the reaction under pressure also in the third period, even surviving the stress that we were under,” Krueger said. “But … the first two periods truly showed the kind of game we want to play. We didn’t give up much at all and continued to create scoring chances and push forward as a group. It was certainly our best forward line effort of the season.”

Cozens, who tested positive for COVID-19 earlier this month, looked engaged from the get-go.

“His responsible play that he showed us after the break he’s had, almost three weeks, and (to) see that kind of performance is so encouraging for us,” Krueger said. “He adds offense, he ends up with grade A scoring chances early in the game.”

With Cozens back, Krueger reunited the trio of Olofsson, Reinhart and captain Jack Eichel. The Sabres’ top line last season hadn’t played together this year.

Krueger said he believes Sabres defenseman Rasmus Ristolainen, who revealed to a Finnish newspaper Friday he has endured a difficult recovery from COVID-19, could play again next month.

“I am concerned that it will take a while to get Risto back, but I’m optimistic that we’ll have him back in a couple weeks,” Krueger said Saturday morning. “Again, that is just a guess.”

Ristolainen, 26, told Ilta-Sanomat he experienced COVID-19 symptoms so severe he struggled to walk up the stairs in his home. The Finn starting skating again Thursday, according to the paper.

Hall, 29, blossomed as a player during his four-year stint with the Devils, earning the Hart Trophy as the NHL’s MVP in 2017-18.

On Saturday, his first visit to Newark since he was traded to the Arizona Coyotes last season, the Devils welcomed him back by playing a tribute video.

“That was awesome,” he said. “It was a long one. I kept waiting to give a wave. But I had some great times here. There was a lot of growth in me as a person, as a player in my time in Jersey and (I was) very nostalgic just driving in yesterday and being around the arena today.”