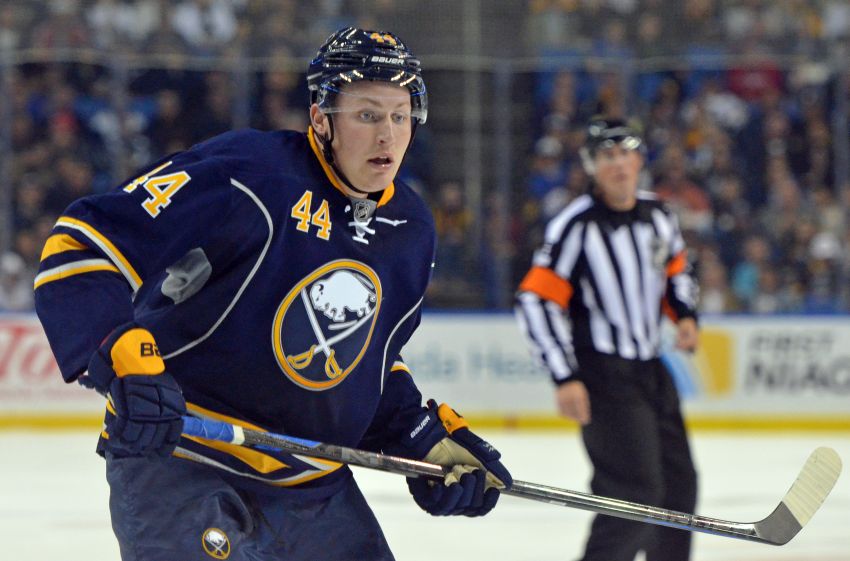 Barely a year ago, Deslauriers was a defenseman in Los Angeles’ organization. Three years into his career, he hadn’t played an NHL game. Then a forward shortage forced the Kings to make him a winger.

That scoring prowess, coupled with his usual nasty edge, caught the Sabres’ attention. They acquired the relatively unknown prospect March 5.

Still, the 23-year-old had no idea where his career was going.

On Thursday, Deslauriers skated on the fourth line during the Sabres’ 3-1 opening-night loss to the Columbus Blue Jackets. For now, he has one of 23 coveted spots on an NHL roster.

“It’s weird,” Deslauriers said Thursday morning inside the First Niagara Center. “Everything happens for something. I’m pretty fortunate that L.A. thought about sending me down and putting me at forward for a couple games just to help out because we were short on forward.

“It kind of went good there. I felt comfortable there. I think it’s just I know the job I have to do. I was a defensemen, so maybe it’s a little advantage to know basically what defensemen like and what they don’t like. So I’ll take that as an advantage for me.”

Deslauriers scored one goal in 17 late-season games with the Sabres. He played 10 games in Rochester after the NHL season ended.

For now, however, his AHL career is on hold. Deslauriers must clear waivers to go back to the Americans. That likely helped him beat out about five other forwards to earn a roster spot out of training camp.

“We’ll continue with Nick’s progress here,” Sabres coach Ted Nolan said. “I think he’s going to be fine in time. But he’s still a young player that has to find his way.”

“You kind of see the teams leaning toward having a fourth line that wants to contribute more,” McCormick said. “You don’t want to have them guarding the water bottles, I guess. We want to be able to offensively to chip in.

“Looking at those guys, they got the offensive tools to do it. They’re real smooth hockey players.”

Before the Sabres began their skate Thursday morning, Nolan gathered his players in a circle at center ice to begin the franchise’s 44th season.

D’Agostini has been playing in Switzerland. The NHL suspended Konopka for 20 games in the spring for violating its PED policy. Boston recently released Leino from a tryout. Following a tryout in Arizona, McBain signed a deal in Russia earlier this week. Tallinder went home to Sweden after dislocating his shoulder here during a tryout with Toronto.