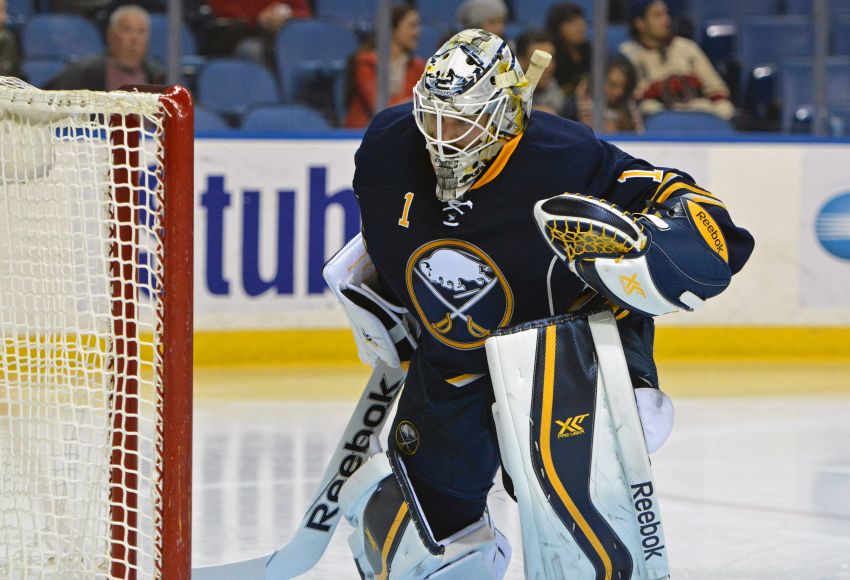 Following Tampa Bay’s final goal late in Sabres’ 5-1 loss, the diminutive Swede angrily whacked the left post with his stick like he was chopping down a tree. When the final horn ended the Sabres’ sixth loss in seven games, Enroth heaved his stick and skated off.

Minutes later, he was visibly upset in the dressing room.

In the Sabres’ 5-2 loss Monday in Ottawa, Enroth was irked and appeared to call out two teammates for a blown coverage after the Senators scored early.

The struggling Sabres have been a mess defensively for three weeks, falling apart late and getting blown out of games they had within their grasp. Opponents have scored a whopping 43 goals in the last 10 games (4-5-1 record) entering tonight’s tilt against the Florida Panthers inside the First Niagara Center.

The Sabres allowed only 19 goals in their previous 10 tilts. Not surprisingly, they went 7-3.

Teams have beaten Enroth 30 times in his last eight starts, helping his goals-against average balloon up to a ghastly 3.16. His save percentage has dipped to .908.

Sabres coach Ted Nolan understands his starting netminder’s frustration. But he wants Enroth to stop acting out on the ice.

“We had a good talk about that,” Nolan said Thursday. “We’re all frustrated. But one thing about frustration, you have to keep it in control. … We’re all frustrated at certain points, but if you start finger-pointing and blaming, then that’s no good, either.”

A lineup riddled by injuries and slowed by a flu bug running through the team has repeatedly broken down in front of Enroth.

“It’s been frustrating the last couple games,” Enroth said. “I obviously don’t like giving up goals. I was obviously a little bit mad after the game giving up a couple of goals. But I’m trying to stay positive. I’m trying to get back to that good stretch we had a couple weeks ago. That’s how it is. It’s gone up and down all year.”

Right now, the Sabres are way down because they’re hurting themselves. Opponents aren’t throttling them like earlier in the year.

“All the games we’re in, it’s not like they’re taking over,” Nolan said. “We’ve been giving it away – bad turnover here, missed assignment here. Those type of things will come back and haunt you, especially with our depleted lineup. We can’t afford any kind of mental lapses right now.”

Sabres winger Drew Stafford traces the struggles to “what we’ve been giving teams.”

“I don’t think we’ve necessarily been outplayed as much as we’re the ones who are turning the pucks over, we’re losing coverage, we’re playing loose in the neutral zone and our own end,” he said. “So that’s really what’s kind of come back to bite us lately.”

It keeps biting them late in contests. The Sabres have recently had several bizarre games in which they played well for the first 40 minutes or so.

– The Sabres trailed Tampa Bay 2-1 entering the third period after the Lightning scored a power-play goal with 58 seconds left in the second period.

“We put ourselves in good positions going into the third period or second period and … that’s when we … got to have that killer instinct,” Sabres defenseman Josh Gorges said.

Of course, some of the late collapses could be attributed to the Sabres’ weak lineup. Nolan said some players have been so ill they shouldn’t have played.

“Banged up, flu, head colds – right now, it’s everything,” he said Wednesday. “You walk in that locker room, that’s all you hear is coughing, sniffing.”

He added: “That’s not an excuse, that’s just fact.”

The fact is the Sabres were playing some good hockey before their recent skid.

“That goes to show we have the ability to do it, and for whatever reason, we’ve gotten away from it the last five, six games,” Gorges said. “We got to look back as to what we were doing when we were having success and find those reasons and start playing a lot of those same ways again. It’s about keeping things simple.”