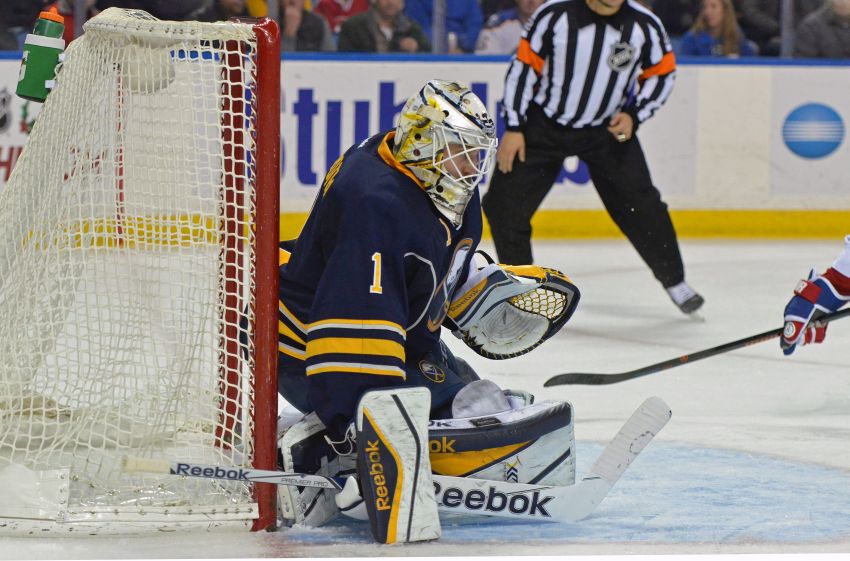 “You look at Jhonas and how he handled it, he wasn’t even bothered by it,” Sabres defenseman Mike Weber said Sunday inside the First Niagara Center. “A lot of goalies would’ve been moving side to side with him, and he just stayed right with him – calm, cool and collected.”

Enroth has been almost unbeatable in shootouts this season, winning all five and stopping an incredible 20 of the 21 shooters he has faced. Right now, no NHL goalie is better in the one-on-one competition.

Only Carolina’s Chris Terry, the second shooter Enroth faced Oct. 14, has beaten him.

“He’s full of confidence and he sees the puck real well … and knock on wood, the shootouts, they don’t have too much to shoot on every time they come down on him, which means he’s in a great position,” coach Ted Nolan said after the Sabres prepared for tonight’s game in Ottawa.

Almost halfway through the season, a victory feels imminent if the Sabres reach a shootout. The Sabres’ 6-1 record is tied with the Isles for the league’s top mark.

They can thank Enroth, whose shootout prowess could help him earn a new contract.

“Everybody’s seen it,” Sabres center Cody McCormick said about Enroth’s play. “He’s on top of his game in those. He’s faced the best players in the league, and he’s gone toe-to-toe with them. We have all the confidence in the world going into the shootouts with either of our goalies.”

Enroth’s save on Tavares, who scored twice during regulation, showcased his soaring confidence. The Swede said he told himself to stay patient and wait for the center’s last move.

“I don’t think it was that tough,” he said. “I’ve seen him do that before, so I was kind of waiting for it.”

Enroth’s .952 shootout save percentage ranks No. 1. No one else is above .895. Florida goalie Roberto Luongo has also won five shootouts but has lost three and has a .776 save percentage.

“It’s going to be hard for me to keep us this pace,” Enroth acknowledged. “So I’m just trying to forget about this and keep playing the next game like it’s a new game.”

Enroth, who will likely start tonight against the Senators, doesn’t prepare much for shootouts. Heck, these days, the Sabres rarely practice breakaways.

“I watch a little bit to see what they’ve been doing throughout the year, anything like that,” Enroth said about the opponents’ best shooters. “The main key is pretty much mentally. I’ve been stopping a couple shootouts in a row. I feel pretty confident with it, and (I’m) just trying to wait them out pretty much.”

Enroth believes his style fits shootouts well. As one of the league’s smallest netminders – he’s listed at a generous 5-foot-10 and 166 pounds – the 26-year-old simply can’t block shots with his frame. He must be agile, smart and read plays properly.

“I’ve always been a goalie that saves pucks,” he said. “I haven’t really been blocking a lot of shots, obviously. So maybe that’s something that played out in my favor, I guess.”

“Last couple years I’ve really been trying to bear down,” Enroth said, “because there’s a lot of extra wins.”

Enroth has 11 wins overall this season.

The Sabres practiced without defensemen Andrej Meszaros (maintenance day) and Rasmus Ristolainen (flu) Sunday. They have reinforcements for the blue line, however. Fresh off of a two-game recall last week, Mark Pysyk has been summoned again from Rochester.

“I’m very comfortable with him,” Nolan said about Pysyk. “I think he’s a very intelligent player. He’s paid his dues down in the American League. He did very well when he was here.”

Meanwhile, Tyson Strachan, out eight of the last 10 games with a lower-body injury, could possibly play tonight, Nolan said.

The Sabres will see how Ristolainen, who left Saturday’s game, feels later.