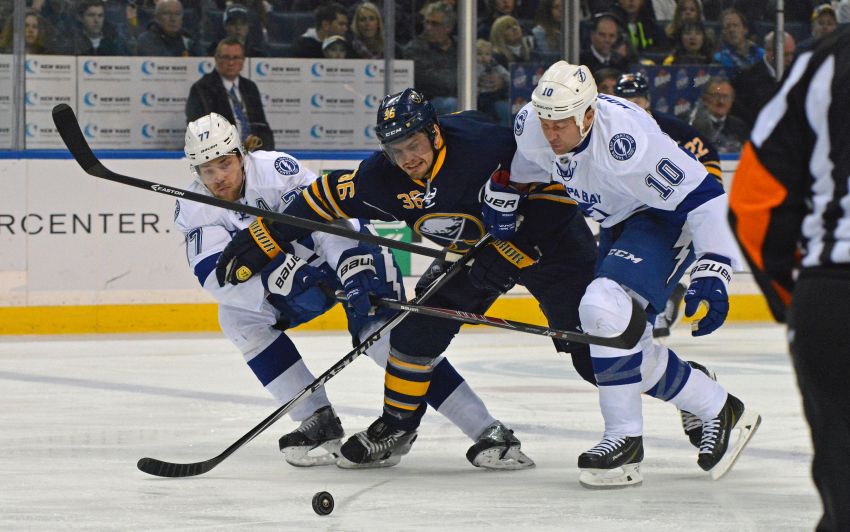 BUFFALO – The stage was set. The Sabres, four days removed from a scintillating third-period rally, fell behind three goals again.

Could the Sabres roar back again Wednesday against the Tampa Bay Lightning? Uh, not quite.

The Sabres couldn’t even get the puck on net late in their 5-1 loss inside First Niagara Center.

The Lightning scored three times on 14 shots during the third period. The Sabres, meanwhile, had one shot the entire period.

When the Sabres recorded their first shot with 4:41 left in the game, what remained of the capacity crowd of 19,070 fans gave them a Bronx cheer.

It was a far cry from Saturday, when the crowd roared late in a wild 4-3 shootout win against the New York Islanders, the Sabres’ ninth home victory in 11 tries.

“We played like a bunch of individuals, trying to beat guys one-on-one, trying to do cute plays,” Sabres defenseman Josh Gorges said. “It’s a team that is in the top of the conference, it doesn’t work. It was evident.”

By the end, Sabres goalie Jhonas Enroth’s frustration boiled over.

After Nikita Kucherov scored the Lightning’s fifth goal, his second of the third period, Enroth whacked his stick across the left post. Following the final horn, Enroth heaved his stick and skated off the ice.

“We really hung him out to dry,” Sabres defenseman Mike Weber said.

“Sometimes it’s better not to say too much,” he said.

Nolan believes the rash of injuries and the flu bug that has been making its way through the team has caught up to the Sabres.

“Right now, we’re just going through a real tough time,” he said. “We got a lot of injuries, lot of guys out of the lineup, a lot of guys not feeling up to par.”

He added: “I’m not making excuses. Sometimes you haven’t got any energy to give. Some of the younger guys we called up, they should be having a little bit more energy. They looked scared sometimes.”

Still, the Sabres had a chance against the Lightning.

Tyler Ennis’ power-play goal, his first score in 10 games, tied it 12:33 into the game after the Lightning’s Matthew Carle opened the scoring.

But Ondej Palat’s power-play goal put the Lightning up 2-1 with 58 seconds left in the second period. Brett Connolly scored early in the third period before Kucherov’s goals.

“You play the way we played tonight and some of the other nights lately, we don’t have a chance,” Gorges said. “I mean, it’s just not the right way to play hockey.”

The Senators outscored the Sabres 3-0 during the third period in Monday’s 5-2 loss in Ottawa.

“We got to find that energy and compete in the third, because we know we’re right there for two periods,” Ennis said.