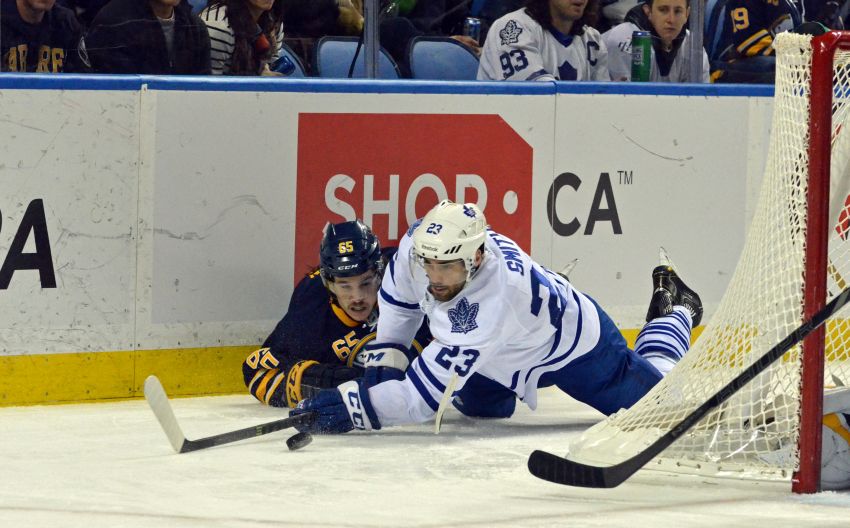 So he scratched center Mikhail Grigorenko and defenseman Brayden McNabb for Friday’s 3-2 overtime win against Toronto Maple Leafs inside the First Niagara Center.

Both should return tonight in New Jersey against the Devils, however.

“I’m not unhappy,” Nolan said Friday morning about Grigorenko’s play. “It’s just when you develop a young guy like that, once in a while it’s better to sit back and see. He’s going to sit back and watch tonight. He’ll be back in the lineup. ”

“Same thing,” Nolan said. “Last time I thought maybe he jumped in a little too much, quicker than he should’ve. He’s a fine young prospect. He’s going to be fine. Both those guys will probably be back in.”

With Grigorenko out after three straight appearances, Tyler Ennis shifted from wing back to center between Luke Adam and Zemgus Girgensons.

“He’s a gifted little guy that needs to have some room to skate with the puck and do some things with it,” Nolan said about Ennis. “We don’t need him battling along the boards.”

The numbers, of course, are still bad. Sabres center Ville Leino has zero goals, four assists and just 10 shots 15 games into his season.

But Leino, having played 20:19 and 19:23 in two games earlier this week, is beginning to earn Nolan’s trust.

“It’s obviously frustrating when you’re not scoring,” Leino said Friday morning. “But I’m happy with getting chances. I’m happy with making plays. There’s a lot of good things. Results are important. Producing is important. But if you keep playing like that and getting chances like that, start circling posts, you’re going to get some goals at one point. Better soon than later.”

Notes: Nolan said Cody McCormick (upper body, three games) could return Saturday. The Sabres would have to make a roster move to activate the forward from injured reserve. … Friday was the Leafs’ second and final visit here this season.