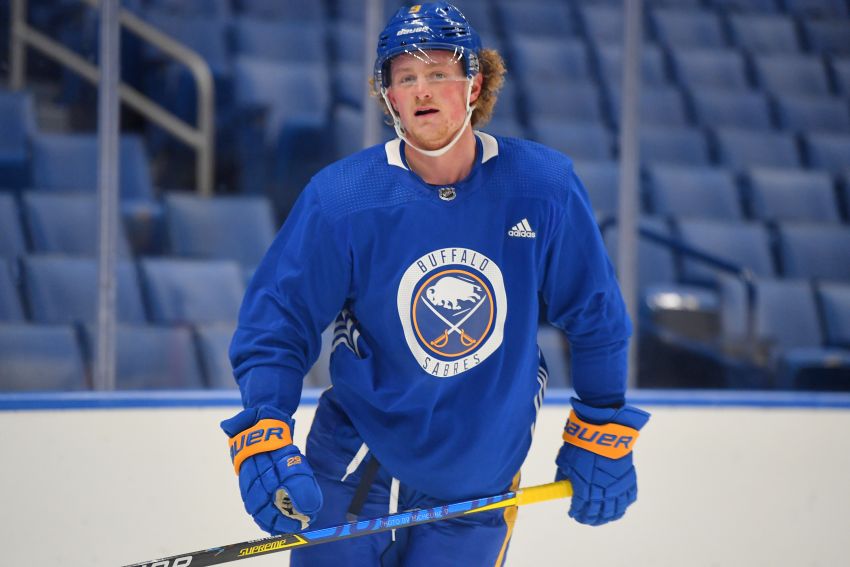 Eichel, 24, said he had been battling an upper-body injury he sustained during an on-ice workout a few weeks ago. The Sabres said at the beginning of training camp their top center and leading scorer was day-to-day.

“Today was a good test for me to get out there and be on the ice with a lot more bodies than I’m used to,” Eichel said on a Zoom call following practice inside KeyBank Center. “So I’m feeling all right right now.”

As expected, Eichel pivoted Hall, the 2017-18 Hart Trophy winner, and Victor Olofsson, who returned to practice after suffering an upper-body injury Saturday.

The top line, of course, possesses the talent to be a dynamic combination. Still, the Sabres have only one week until their season opener against the Washington Capitals.

“You just try to build a relationship with him, know his tendencies,” Eichel said of Hall. “Yeah, obviously, it’s the first time we’ve been on the ice together, so just try to build some chemistry as quick as possible. We know we’re going to play in a week. So we’re just trying to communicate as much as we can.”

Sabres coach Ralph Krueger said he told Eichel he must be patient.

“He did miss those first four days of extremely intense practice and work,” Krueger said. “For him, the first time for him in a big crowd like that on the ice in a long time. We were kind of sliding him out at the halfway mark. But we know the genius of Jack. He’ll find his way quickly.”

Sabres goalie Linus Ullmark, meanwhile, also practiced for the first time this camp. Ullmark had been quarantining because of an immigration issue following his arrival from Sweden.

The Sabres announced before Wednesday’s session that prospects Dylan Cozens and Jack Quinn have been added to their camp roster and are expected to join them in the coming days.

Krueger said the 19-year-old forwards have arrived in town and must “go through the minimal quarantine.” They traveled to Buffalo in a private plane, according to TSN’s Bob McKenzie.

“We hope to see them on the ice in a few days,” Krueger said. “Clearly, Dylan Cozens will be a part of the mix and we look forward to integrating him into the group. Jack has had an excellent tournament.”

Cozens, the seventh overall pick in 2019, could have a chance to crack Buffalo’s lineup right away. His eight goals led the tournament. He also added eight assists.

He will join the Sabres’ main practice group.

Quinn, the eighth overall pick in October, will skate with the Sabres’ second practice group, which is mostly comprised of AHL players.

“Everybody could see what an exciting skill and talent he is,” Krueger said. “Nobody’s been speaking about Ryan but we thought as the tournament grew, he grew and that he stepped up and had a really good final game.”

Johnson is a sophomore at Minnesota.

The Sabres have signed defenseman Ryan Jones, 24, to a professional tryout agreement, the team announced Wednesday.