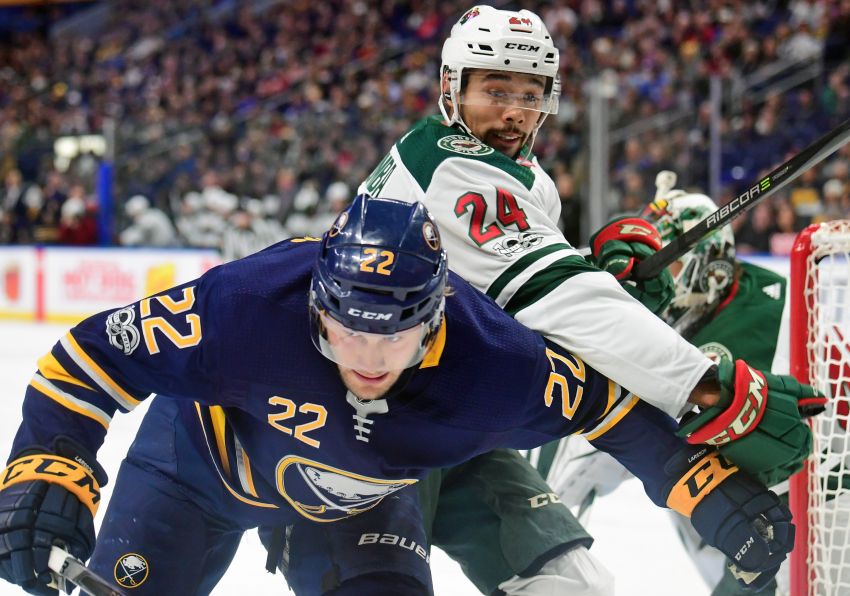 BUFFALO – Having never been suspended in his 229-game career, Sabres center Johan Larsson figured the NHL would slap him with a one-game ban for cross-checking Florida Panthers center Vincent Trocheck in the face late in Thursday’s 4-2 loss.

“I have no history, I’m kind of surprised I got two games,” Larsson said this morning inside KeyBank Center. “The guy didn’t get hurt or anything.”

Still, Larsson must sit out tonight’s tilt against the St. Louis Blues and Tuesday’s against the Anaheim Ducks.

“I was a little surprised,” Sabres coach Phil Housley of the suspension. “I think just the way the game played out, tempers were high, there were some chippy play on both parts being in the heat of the battle.”

Winger Benoit Pouliot and center Evan Rodrigues will move in. The Sabres must make a roster move to activate Beaulieu from injured reserve, so winger Nick Baptiste, who was out skating late this morning, could get sent back to the Rochester Americans.

Update: Baptiste has been sent down.

Rodrigues tailed off after scoring twice in the Sabres’ 3-2 overtime loss Dec. 10 in St. Louis.

“Once you take a step back, it’s good just to realize what got you up here and what got you in the lineup, and when you did get in the lineup in Colorado (Dec. 5), he provided some good urgency in his game,” Housley said of Rodrigues.

The Sabres will try for the fourth time to win their 1,000th home game in franchise history. They’ve been brutal at home this season, going 6-14-3.

After falling behind early, they showcased plenty of emotion late in Thursday’s rugged affair.

“You got to play this game with emotion and we got to start that way,” Housley said. “This is our building, we got to be coming out and establishing a forecheck, being tough to play against. I really liked our response. … We finally came with some emotion. We need to do more of that.”

Sabres goalie Robin Lehner will start, his 39th appearance this season. Carter Hutton, who’s 13-4-1 with a 1.70 goals-against average and a .945 save percentage, will go for St. Louis.