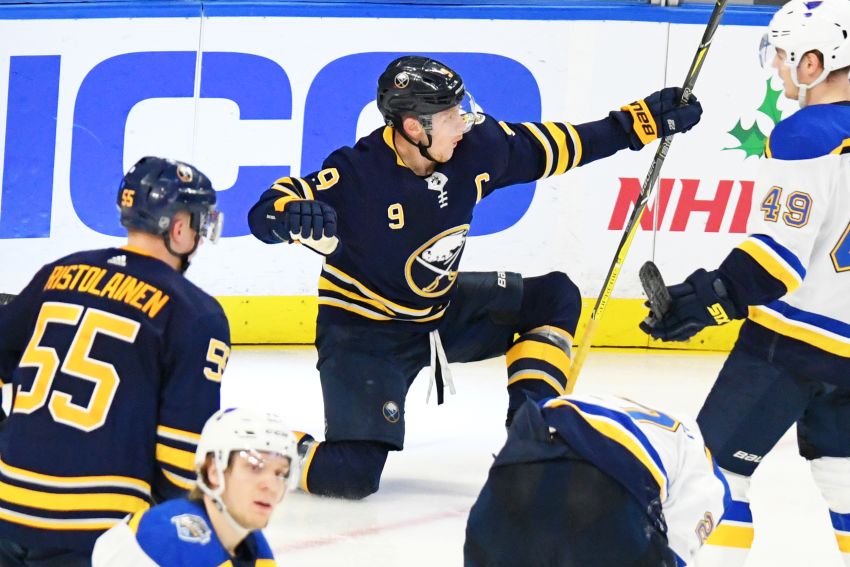 BUFFALO – Sabres captain Jack Eichel grabbed the puck behind the net, surveyed the action in front of him and started creeping out.

Late in third period of a tie game, the St. Louis Blues should’ve been shadowing Eichel everywhere. But they inexplicably gave the NHL’s hottest scorer all the time and space he needed.

So Eichel skated out front and, without any Blues nearby, beat goalie Jake Allen from the bottom of the left circle 5:46 into the third period.

“I’ll take it,” Eichel said after scoring the winner in Tuesday’s 5-2 win over the Blues, a goal that extended his career-best point streak to 14 games. “Most teams probably scout like I’m going to pass there. I think … they were trying to take my options away.”

In doing that, the defending Stanley Cup champions left the best option open.

Very quietly, a 5-2-3 run has vaulted the Sabres into sole possession of second place in the Atlantic Division. They’ve won back-to-back contests for first time since a three-game streak from Oct. 17 to 22.

Eichel has morphed into an elite scorer in the last three weeks, compiling 12 goals and 25 points during his scorching run.

Meanwhile, goalie Linus Ullmark has been the Sabres’ “backbone,” according to Eichel, going 5-1-1 with a .923 save percentage in his last seven games. Ullmark made 28 saves Tuesday.

Suddenly, the Sabres are surging again.

In shaking off a wretched stretch in which they lost 10 of 12 games, Eichel said the Sabres are “starting to form an identity” under coach Ralph Krueger.

“With the confidence Ralph’s instilling in us and the way he wants us to play, it’s evident the way we can play every night to give ourselves a chance to win,” he said.

Krueger said the Sabres “never let up under pressure” Tuesday.

“The mental strength we showed on giving up the 1-0 lead, the 2-1 lead, and then bouncing right back with that 3-2 lead and how we managed it down the stretch was definitely the best management of a lead this season by far,” he said.

Krueger said the Blues, a heavy team, come at opponents in waves.

“It’s the type of game we haven’t really seen this year from anybody, and I thought the group really reacted quickly and adjusted well,” he said.

Not only did the Sabres knock off a heavyweight Tuesday, they did it two nights after closing a three-game road trip by beating the Edmonton Oilers 3-2 in overtime.

The first game following a western trip is often a dud, but the Sabres looked fresh from the get-go, getting a goal from winger Sam Reinhart 18 seconds into the game.

“I thought we had more energy than they did down the stretch and that was a sign of the work these guys are doing to prepare for these kinds of challenges,” Krueger said. “So the mind is only strong if the body is still performing. That combination has to happen, and it certainly did tonight.”

In the waning minutes, before winger Zemgus Girgensons’ empty-net goal put the Sabres up 4-2 before the announced crowd of 16,521 inside KeyBank Center, they still looked fresh.

“We wanted to keep the game flowing, keep it moving, and everybody did a really good job of that,” Krueger said. “I even thought there was another gear there in the guys in the last five minutes. Just that desire to win now, the love for trying to get that feeling in the room is big.”

Larsson, a checker not known for producing offense, added an assist and has compiled two goals and nine points in the last seven contests. He has his first three-game point streak since November 2016.

After scoring Tuesday, the excited Swede celebrated wildly, almost as if he had won the game.

“I was so tired and I was just thinking I could celebrate a little better,” he said. “I don’t know if it was good. I kind of almost fell.”

One thought on “Jack Eichel comes up clutch in win over Blues, Sabres jump into second place”