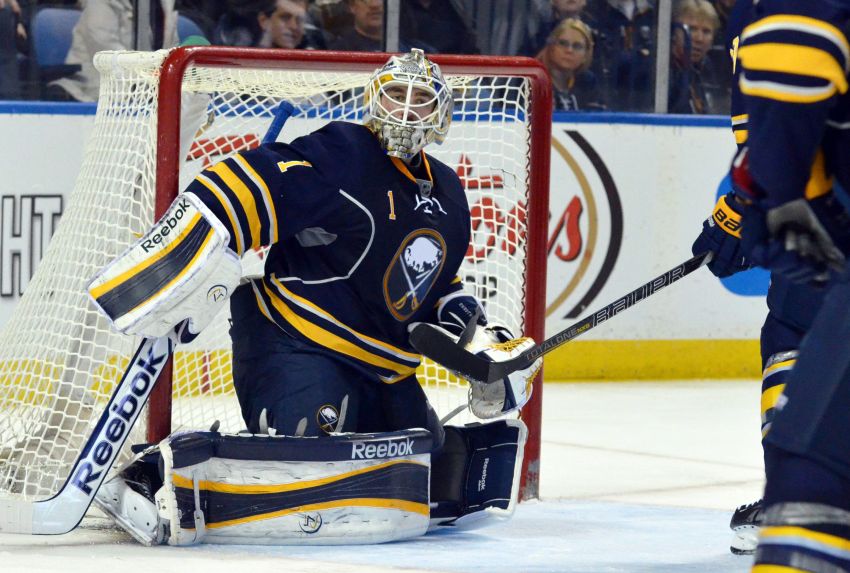 “Ryan’s the starter here,” Enroth said Saturday as the Sabres cleaned out their lockers inside the First Niagara Center.

But how much longer will Ryan Miller be the starter?

That could leave Enroth, the No. 2 the last two seasons, as the team’s top netminder.

Enroth called the situation “kind of tough.” He’s friends with Miller and respectful of his stature.

“It’s kind of hard to take the job from him,” Enroth said. “So we’ll see what happens, can’t really say too much about it right now.”

In his last six starts, Enroth went 4-1-1 with a 1.47 goals-against average, a .956 save percentage and one shutout. He earned consecutive starts two weekends ago.

“I think I’m ready,” Enroth said about being a No. 1 goalie. “I’m pretty comfortable when I have back-to-back starts and stuff like that. I think I’m ready. We’ll see what happens here.”

Not long ago, it was difficult to envision Enroth keeping his backup job, let alone being an NHL starter.

The Swede’s fast start and subsequent struggles have been well documented. He won nine straight games from the end of 2010-11 into the beginning of last season. He even put Miller on the bench two straight contests in November 2011, igniting a goaltending controversy.

“The games I felt bad I just felt scared and I wasn’t comfortable,” Enroth said. “I just dug in my heels. I need to play a little bit more aggressive and stuff like that. That’s something I learned from and something I need to remember here for the future.”

Enroth acknowledged Saturday he was playing for his career March 7 in New Jersey, his first nod in more than a month, following two poor early-season starts.

“Yeah, honestly, I was probably backed up to a wall that night,” Enroth said. “So I needed a good effort that night. So I’m very happy I came out strong for that night.”

Enroth dazzled that night, stopping 27 shots before cramps forced him from what would become a 3-2 shootout loss to the Devils. That strong outing earned him another start five days later, a 3-1 home win over the New York Rangers in which he stopped 32 shots.

With his confidence restored, Enroth quickly morphed into a different player, becoming the goaltender he believed he could be.

“Yeah, (it was) obviously very good for me,” Enroth said about his hot stretch. “I could prove (to) myself and everyone else I could still play in this league, I guess. So those games were huge for me.”

“Lindy probably had a lot of confidence in me two years ago … when he played me a couple of games back-to-back and stuff like that,” Enroth said. “That was good. When Ron came in, I just had a game in New Jersey. I played well. I don’t think I played a bad game since then. I’m pretty happy about that.”

If the Sabres deal Miller, they have another option in net, having acquired prospect Matt Hackett from Minnesota in the Jason Pominville trade earlier this month.

The 23-year-old won his only three regular-season starts in Rochester, posting 1.62 goals-against average and .955 save percentage.

The Americans started Hackett, who has nine games of NHL experience, over David Leggio on Sunday for the second game of their first-round playoff series, a 2-0 loss in Toronto.

The Marlies lead the best-of-five series 2-0.

Notes: Sabres president Ted Black and general manager Darcy Regier plan to address the media today. … The Sabres have a 3.6 percent chance of gaining the No. 1 pick in tonight’s NHL Draft Lottery. All non-playoff teams have a shot at the top pick for the first time this year.