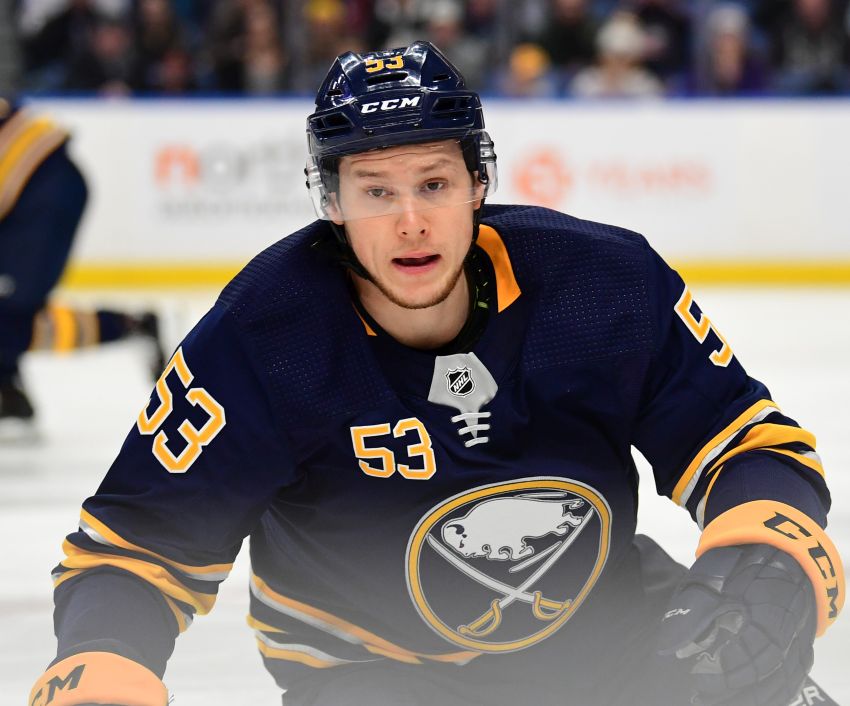 BUFFALO – Sabres winger Jeff Skinner needs time to decompress following a grueling 82-game season before he starts thinking about his next contract.

Sure, the 40-goal scorer said he loves playing in Buffalo. Despite the Sabres’ sorry season – coach Phil Housley was fired Sunday – he believes they’re heading in the right direction.

But Skinner, who can become an unrestricted free agent July 1, made sure his contract took a backseat during the season.

“I’ve kind of said all year my focus was here,” Skinner said Monday as the Sabres held end-of-season meetings inside KeyBank Center after finishing a disappointing sixth in the Atlantic Division. “I’m playing the games and sort of finishing the season.”

Now that the season has ended, the winger knows he will be asked whether he plans to re-sign with the Sabres or test the market.

“But it’s been two or three days,” Skinner said. “It’s not enough really to give it some proper thought that it deserves. It deserves some reflection, just like any season. We’ll take the time to do that right away, but … I love it here. I like the guys, I like the city. I had a great time.”

While Skinner enjoyed a career year after arriving from the Carolina Hurricanes on Aug. 2 – he had never scored more than 37 goals – his first campaign in Buffalo was still tough. He missed the playoffs again.

In his nine NHL seasons, Skinner has never participated in the postseason. No active player has played more games (661) without appearing in a playoff contest.

General manager Jason Botterill, who has been talking with Skinner’s agent, said Sunday the Sabres still have a “100 percent” chance to re-sign their leading goal scorer.

Whether he stays in Buffalo or goes elsewhere, Skinner will get paid handsomely. As a four-time 30-goal scorer fresh off a huge season, he should command a long-term deal worth around $8 or $9 million a year.

“It’s a big decision,” Skinner said. “It deserves a lot of thought, a lot of reflection – on both parts, I think – in order for that process to play itself out. I think it’s going to take some time. It’s not going to happen in the first couple days.”

Naturally, Skinner said when looking for a team, “you want to win.”

“That weighs a big part in it,” he said.

The Sabres, having missed the playoffs eight straight seasons, can’t offer any recent history of winning. Still, the grass might not be greener somewhere else.

Skinner showcased dynamic chemistry beside captain Jack Eichel most of the season. By November, they had morphed into one of the best center-wing duos around. Both made the NHL All-Star Game.

If Skinner re-signs, he could be paired beside Eichel for years to come. Seasons of 30 or more goals could become common.

“He’s an unbelievable person, he’s an unbelievable hockey player,” Eichel said. “I mean, we want him in the room. … He’s really close with all the guys. He adds a great dynamic to our team. You can’t say enough good things about him. He scored 40 goals this year on top of everything.

“We would definitely love having him in the room, but that stuff’s going to take care of itself this summer.”

The young talent the Sabres possess impresses Skinner. Rasmus Dahlin, for example, just completed one of the best rookie seasons by a teenage defenseman in NHL history.

“I was optimistic and positive about sort of the direction the organization is headed,” Skinner said of his thoughts before the season. “I don’t think that’s changed. Obviously, this season didn’t go as planned and we didn’t get the results we wanted to, but … the young core they have, the talent they have in the system, it hasn’t changed.

“In a lot of cases, the talent is going to keep getting better and it’s going to keep going. … There is still growth. I think … the organization is on a pretty good direction.”

Sabres defenseman Zach Bogosian on the lower-body injury that sidelined him the final eight games of the season: “I’m trying to figure that out now, trying to have a few conversations with doctors and trying to make the right decision moving forward.”

Notes: The Sabres sent three players – forwards Alexander Nylander and Victor Olofsson and defenseman Lawrence Pilut – back to the Rochester Americans on Monday. They also assigned defenseman Matt Tennyson to the Amerks on Saturday. … Sabres winger Sam Reinhart said he will represent Team Canada at the World Championship next month in Slovakia. Defenseman Rasmus Ristolainen said he knows if he will play for Team Finland. However, he wants to talk to Finland’s coach and GM before he reveals his plans.