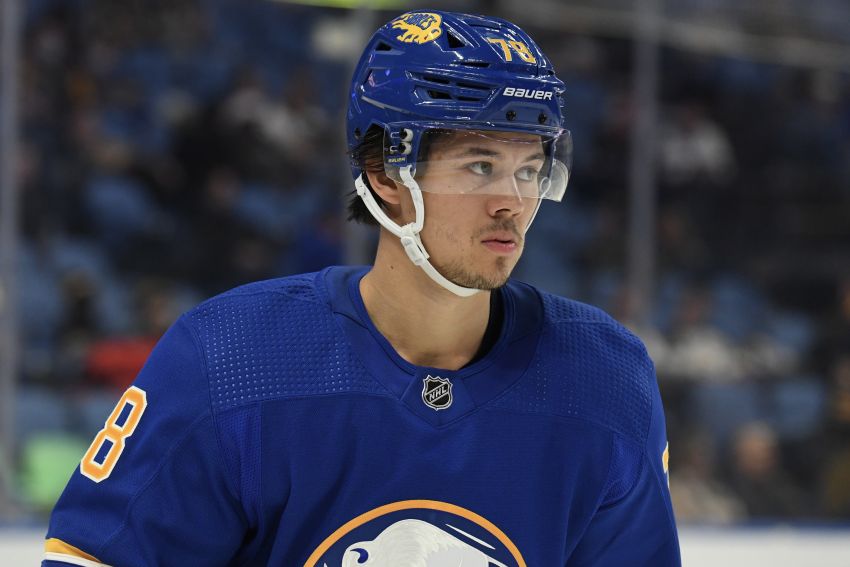 Jacob Bryson scored for the first time in nearly a year. ©2022, Micheline Veluvolu

TORONTO – Prior to Wednesday’s 5-1 victory over the Maple Leafs, the Buffalo Sabres had been mired in a season-worst rut, losing six straight games in regulation. For all the optimism they’ve generated at times this year, the cold reality they’re a rebuilding team destined for another lottery pick has been hitting home.

It hardly felt like they’d snap of their funk against the Leafs, one of the NHL’s hottest and most potent teams. The Leafs had been throttling opponents, scoring 18 goals during their three-game winning streak.

The Sabres, meanwhile, had allowed 28 goals in their skid.

So Wednesday’s win, the Sabres’ first at Scotiabank Arena since March 26, 2018, ranks among this season’s most impressive and surprising.

The Sabres stymied the trio of Auston Matthews, Mitch Marner and Michael Bunting, holding one of the league’s elite lines scoreless.

They pounced on the Leafs early, getting a power-play goal from defenseman Jacob Bryson, his first tally this season, 2:26 into the game.

Rasmus Sandin tied it at 11:48, but second-period goals from winger Victor Olofsson and center Tage Thompson, his team-leading 23rd score and ninth in the last nine games, gave the Sabres full control.

“Our guys, all four lines, all six defenseman, (goalie Craig Anderson), all played hard for each other,” Sabres coach Don Granato said. “The little things, the details were there and they mattered. They worked hard for the guys next to them. It’s always nice to see the guys get rewarded. Our guys have worked really hard and I don’t think they necessarily deserved to be on the string they were on, of not winning.”

Bryson, who hadn’t scored since March 6, 2021, said following the first period the Sabres “just knew that game was very winnable.”

“We could just take it over, and that was Don’s message,” he said. “We had a good first period but we could be a lot better. I think we took it to them the second and third there and we limited their chances to very minimal, and we capitalized on all ours.”

The Sabres, who have nine losses this season when leading after the second period, received third-period goals from wingers Jeff Skinner and Kyle Okposo to seal their first win since Feb. 15.

“Just kind of keep playing the same way,” Olofsson said of the third period. “We didn’t want to back off at any point, just keep playing smart, get pucks deep. I think that’s what we did and we made it hard on them. They had to work for every chance they got.”

Granato said: “We didn’t back off, obviously, in the third, it was probably our best period, was good to see. And then from the perspective that we pushed, we pushed hard, and that mattered to them. And they got they got rewarded and they earned it.”

Hours before the game, Okposo said the Sabres had to play aggressively – “On our toes and trying to go right after them,” he said – to defeat the Leafs.

“We’ve talked to our team a lot about it, if we back off teams, it’s whatever we think is going to be bad, it’s going to get way worse,” Granato said. “And tonight is a perfect example. We have to play that way, we have to play that aggressive. It’s the best way to develop, to get better. …

“When you back off, you don’t learn anything, and you lose your confidence pretty fast. So it was important for us to do that and sustain that.”

When the Sabres faltered, Anderson bailed them out. He looked sharp all night, making 29 saves, including a breakaway and rebound stop on Pierre Engvall shortly after Olofsson’s goal 12:19 into the second period.

By the end of the night, what remained of the crowd of 17,122 fans serenaded Leafs goalie Petr Mrazek with Bronx cheers when he stopped the puck.

Ontario lifted COVID-19 protocols, so the Leafs had a full building for the first time since Dec. 11.

One thought on “Sabres throttle Maple Leafs, end losing streak: ‘They got rewarded’”