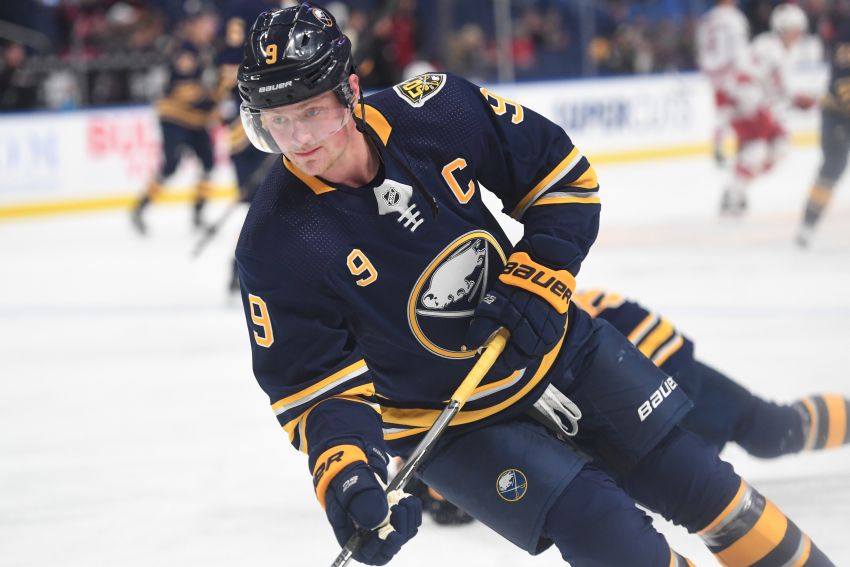 BUFFALO – Sabres captain Jack Eichel said he has been dealing with the upper-body injury that sidelined him for Thursday’s ugly 6-1 road loss to the Philadelphia Flyers.

“It’s not something that came out of nowhere,” Eichel said after practicing this afternoon inside KeyBank Center.

Eichel, who’s day-to-day, according to coach Ralph Krueger, has dealt with the injury well. The slick center carried a 17-game point streak into Thursday’s game, the second-longest in franchise history.

But after skating in the pregame warm-up, the Sabres announced Eichel would be out.

“It’s obviously frustrating,” Eichel said. “You never want to not be on the ice with the team. I’m a competitive guy, I want to be out there every night. But I thought it was the best for me at that time.”

The Sabres have remained tight-lipped about Eichel’s injury, offering few details. Eichel spoke for less than a minute today.

“It’s upper body, and we’ll leave with that,” Krueger said.

Krueger said the Sabres will make a call on Eichel on Saturday morning before their afternoon game against the Los Angeles Kings.

While Eichel can continue a personal point streak, the NHL won’t recognize it as an official record because he missed a game. He was one game shy of Gilbert Perreault’s franchise record.

Eichel has been the NHL’s hottest player, compiling 16 goals and 31 points during a streak that started Nov. 16.

In other injury news, Krueger said center Johan Larsson, who left Thursday’s game with an upper-body injury, will miss the next two contests.

“It’s a new bruise,” he said. “Again, it’s obviously nothing that serious, but he’s a tough guy and he worked and tried to go through it yesterday. We found it was better to pull him.”

Meanwhile, center Evan Rodrigues practiced today after leaving Thursday’s game. Rodrigues needed to be helped off the ice after a shot hit an unprotected part of his left ankle.

“The assessment looked positive today, but, again, we’re going to evaluate in the morning,” Krueger said.

Rodrigues said he couldn’t feel his foot at first and thought he had suffered a deep bruise. By this morning, however, it felt better.

Lazar, 24, has played six games with the Sabres this season, scoring one goal.

Before being summoned for the third time since October, he played four games at center, his natural position.

“I’ve always been able to slide over to the wing,” he said. “But I feel like I can give more down the middle.”

Why can Lazar give more at center?

“Just being around the puck,” he said. “I really like to build my speed through the dots and get in on the forecheck.”