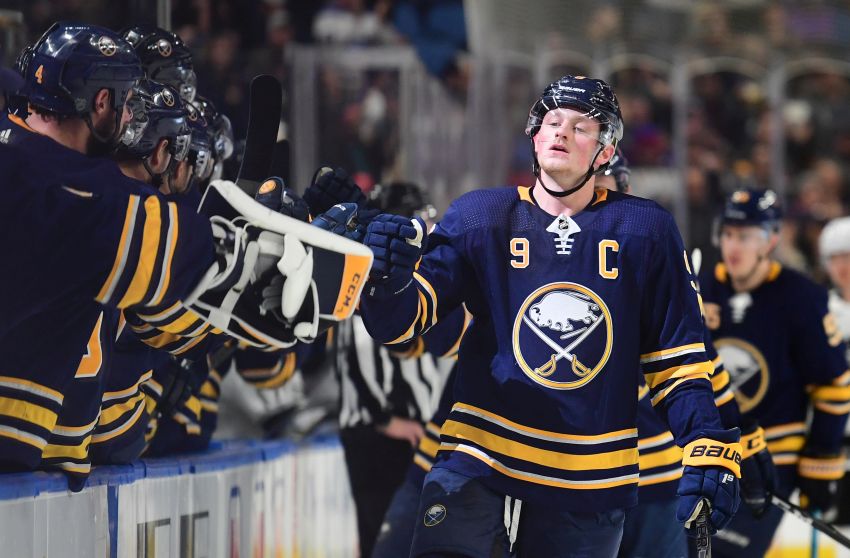 The Sabres’ leading scoring will miss tonight’s contest against the Florida Panthers at KeyBank Center and Saturday’s road tilt versus the Boston Bruins.

Eichel, who earned a spot in the NHL All-Star Game on Wednesday, will be reevaluated early next week, Housley said.

Eichel, 22, had a maintenance day from Sunday’s practice before leaving Monday’s 3-1 loss to the New York Islanders after skating only four shifts.

On Wednesday, Housley did not have update on Eichel, who hasn’t been practicing.

In other news, despite scoring 26 goals in the first 40 games, Jeff Skinner, Eichel’s left winger, wasn’t named an NHL All-Star.

Of course, Skinner, could get a spot from the NHL’s “Last Men In” voting, which runs until Jan. 10.

But is Skinner, who’s tied for second in goal scoring, a snub?

“I don’t know if it’s a snub,” Housley said. “There’s a lot of great players in this league that aren’t going to be able to play in the All-Star Game. Jeff Skinner’s obviously been a big, big contributor for us, has put us in this position. Obviously, we’d like to see him be on the team for his contributions early, the 40-game mark.

“It’s good to see he still has an opportunity with the voting, so everybody please get out there and vote for Jeff Skinner.”

In lineup news, goalie Linus Ullmark will start against the Panthers, who have beaten the Sabres seven straight games.

“He’s played outstanding for us, even when we haven’t given him the run support,” Housley said of Ullmark, who is 3-0 with a 1.65 goals-against average and a .953 save percentage in his last three starts.

Defenseman Lawrence Pilut, meanwhile, will return after sitting out two games as a healthy scratch. Nathan Beaulieu will be scratched.

Pilut, 23, and Rochester Americans defenseman Zach Redmond, 30, have both earned spots in the AHL All-Star Game on Jan. 28 in Springfield, Mass., the league announced today.