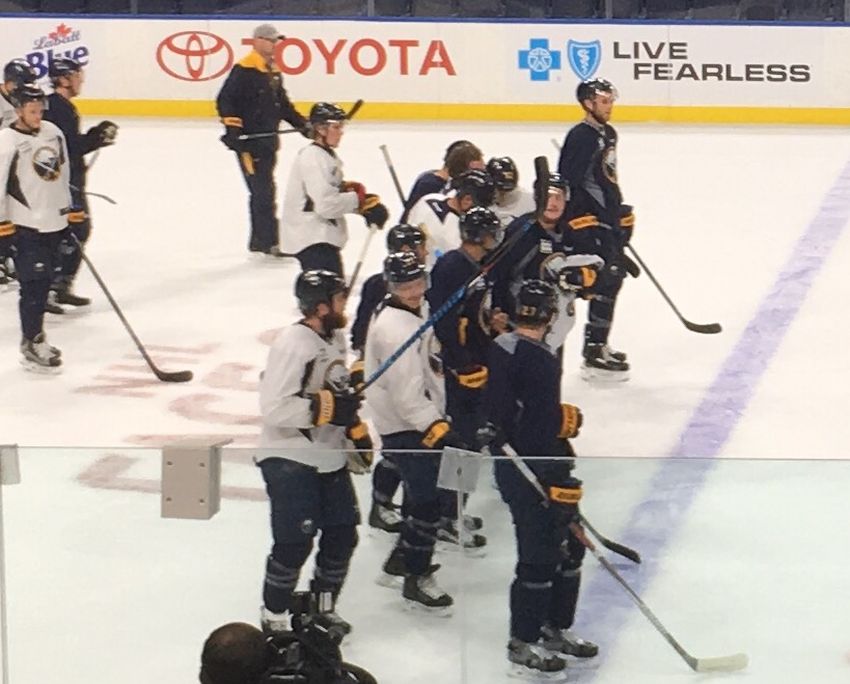 “Not a lot to tell after that,” Sabres coach Dan Bylsma said. “He’s going to get evaluated this afternoon.”

Update: The Sabres have announced Eichel has a high ankle sprain. No timetable has been set for his return. TSN’s Bob McKenzie, however, tweeted the Sabres anticipate Eichel will miss at least four to six weeks, perhaps longer.

Eichel’s leg buckled after he lifted Zemgus Girgensons’ stick and planted his foot during a power play drill. Eichel, 19, went down hard and writhed in pain before team staff attended to him.

“There’s not any kind of battle of contact with anybody,” Bylsma said of how the injury occurred.

The second-year star was eventually brought to his feet after a minute or two and led off the KeyBank Center ice.

The practice, which was lively and noisy, quickly became silent.

It won’t, however, be easy to deal with. Eichel, the second overall pick in 2015, is a potential superstar. He scored 24 goals and 56 points in 81 games during a rookie season in which he consistently improved and wowed fans.

The Sabres, of course, open the season Thursday against the Montreal Canadiens. After a dramatic improvement in 2016-17, there’s an excitement accompanying the campaign and an expectation the Sabres will end a five-year playoff drought.

Eichel was probably the biggest reason for that optimism.

Sabres goalie Robin Lehner suffered a high right ankle sprain opening night a year ago, an injury that sidelined him three months and dogged him until he had season-ending surgery in late March.

In other news, defenseman Rasmus Ristolainen practiced today, a day after signing a six-year, $32.4 million contract.

“I trusted we would get it done,” Ristolainen said. “I’m not sure when.

Meanwhile, winger Kyle Okposo (bruised knee) is out Thursday but will skate in the morning, Bylsma said.

Canadiens goalie Carey Price, arguably the NHL’s best, won’t make the trip to Buffalo because of the flu.