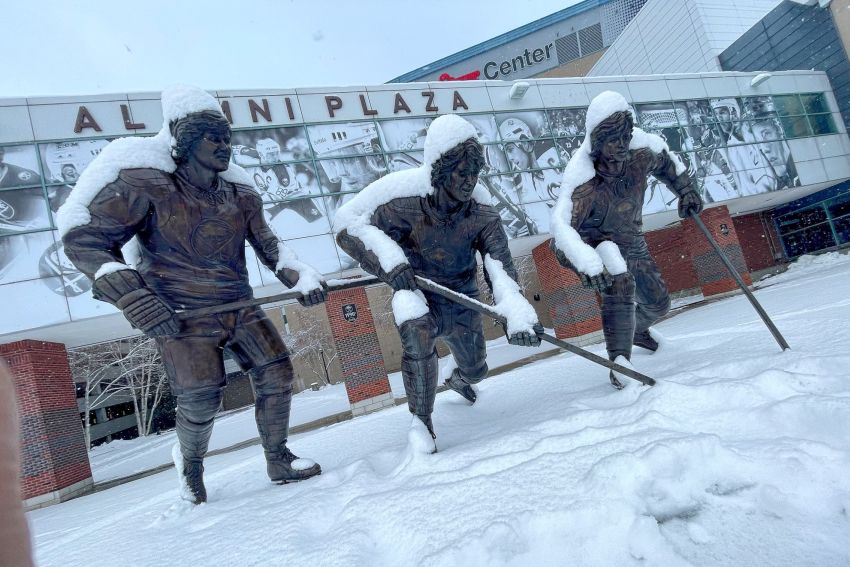 The French Connection statue outside KeyBank Center will likely be snow-covered this weekend. ©2022, Micheline Veluvolu

The game will be made up at 12:30 p.m. on March 4. The Sabres’ home game against the Philadelphia Flyers originally slated for that date has been rescheduled for 7 p.m. on Jan. 9.

Friday’s game was the Sabres’ last before the league’s three-day Christmas break. They don’t play again until Tuesday’s road contest against the Columbus Blue Jackets.

The NHL, of course, rarely postpones games so far in advance, but the league clearly didn’t want to risk the Lightning getting stuck in Buffalo over the holiday break.

Tampa Bay was supposed to fly to Buffalo after finishing a back-to-back road set Wednesday against the Detroit Red Wings.

The postponement is ill-timed for the surging Sabres, who have won four straight contests and just concluded a three-game road trip. They last played Monday, beating the Vegas Golden Knights 3-2.

According to the National Weather Service, the storm will have “major impacts” in and around Buffalo and driving conditions will be “dangerous or impossible.”