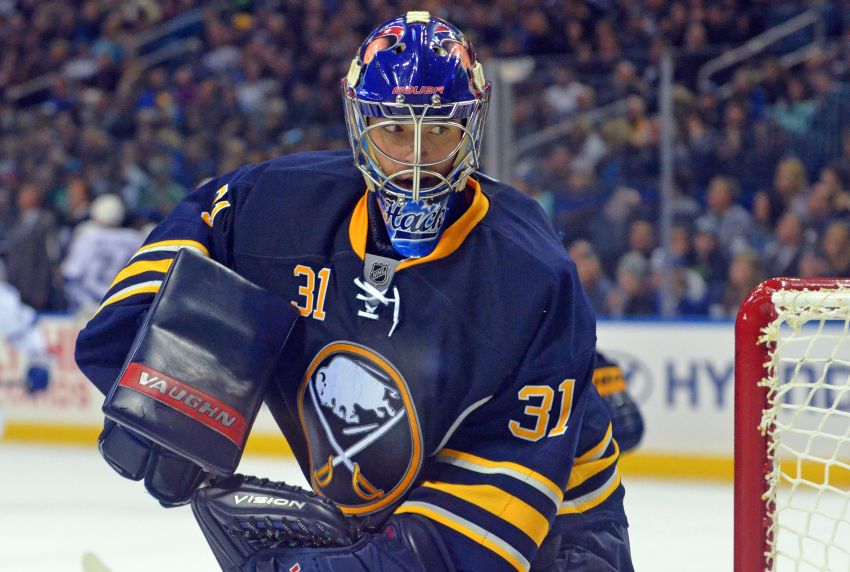 BUFFALO – Nothing has changed, Matt Hackett said. Forget that he was enduring a terrible season in Rochester before injuries forced his recall. Forget that general manager Tim Murray recently said the Sabres’ goalie of the future likely wasn’t in the organization.

Hackett, a key piece of April’s Jason Pominville trade with the Wild, hasn’t lost much confidence. The 24-year-old still believes he can become the team’s No. 1 netminder, a coveted spot that’s up for grabs following Ryan Miller’s recent trade.

“I still believe in myself,” Hackett said prior to making 29 saves Saturday in the Sabres’ 4-3 overtime loss to the Tampa Bay Lightning, his third straight start. “I think I’m a good goalie. I haven’t had the season I wanted to. I’m human. I’m not going to have a perfect season every year.”

But Hackett struggled with the Americans this season, posting some ugly numbers – a 3.02 goals-against average and .898 save percentage – and losing his starting job to Nathan Lieuwen.

“You can look at stats all you want, but that doesn’t tell the whole story,” Hackett said.

“I’m really happy for him,” said Sabres forward Matt Ellis, Rochester’s captain earlier this season. “No pro career only goes up. There’s ups and downs. As a young player, especially a young goalie, it’s how you handle those ups and downs.”

Hackett made 35 saves in the Sabres’ 3-1 win March 20 in Edmonton, his fourth NHL victory and first since March 8, 2012. He made stopped 33 shots Tuesday’s 2-0 loss in Montreal before getting yanked after allowing four goals in the first period of Thursday’s 6-1 loss in Nashville.

Interim coach Ted Nolan wanted Hackett to start again given the Sabres’ awful play around him.

Coaching and talent will only take a goalie so far, Nolan said. Hackett’s demeanor has impressed him.

“We can kind of position him and what have you, but you have to have that competitive spirit,” Nolan said. “He does. He’s very competitive.”

“The puck comes in, he just swallows it or deflects it to the corner and that’s that,” Ruhwedel said. “He doesn’t have to make diving blocker save or diving glove save. He’s just in position to swallow it all the time.”

The Sabres swallowed another loss Saturday before a capacity crowd of 19,070 fans inside the First Niagara Center, their 12th setback in the last 14 games (2-11-1).

An incredible own goal by Steven Stamkos – the star’s pass from the Buffalo corner bounced off the opposite wall and slid into the Lightning’s open net on a delayed penalty – put the Sabres up 3-2 8:14 into the third period. Cory Conacher was credited with the goal.

“I was trying to think did I touch it last,” Hackett said.

Former Sabres goalie Mika Noronen was credited with a goal in 2004 after Toronto put the puck in its own net.

Has Conacher ever “scored” a crazier goal?

“No, definitely not,” he said.

But the Sabres, who blew a 2-0 advantage before the first period ended, lost the lead after Ryan Callahan scored with Conacher and Mike Weber in the penalty box.

Then, with Drew Stafford off for hooking, Stamkos’ second goal of the night won it 1:53 into overtime.

“I’m proud of the guys in for at least coming out and having a better effort compared Nashville,” he said.

The Sabres fell behind 4-0 early Thursday. Saturday was a nice bounce-back game.

“It was huge,” Hackett said. “We came out to play tonight. We were much more focused, I thought.”

Nolan said Hodgson played perhaps his best game since he began coaching the Sabres in November.