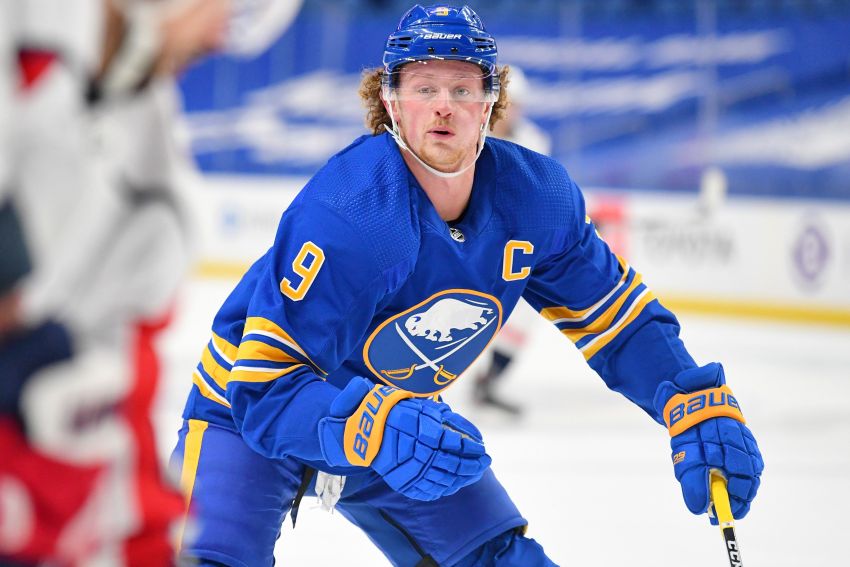 Before the Sabres departed Buffalo on Thursday for their two-road trip to Washington, the team’s social media accounts posted images of coach Ralph Krueger and his players sporting Bills apparel as they walked to the plane.

While most of them were wearing hats, Sabres captain Jack Eichel donned a No. 17 blue jersey of Bills quarterback Josh Allen.

The Bills, of course, play in the AFC Champion Game on Sunday against the Chiefs in Kansas City.

“The players and staff feel that they’re part of the Bills’ journey, go ahead and show it if you want,” Krueger said on a Zoom call prior to tonight’s game against the Capitals. “So it wasn’t a big push or we didn’t need to sell anything. It was just a short conversation in one of our meetings prior to departure, and it was nice to see all the Bills clothing and paraphernalia on the plane. Everybody is excited.

“Of course, our focus needs to be on our game and our games, but how can you, as somebody feeling at home in Buffalo, not feel excited about what’s coming up here this weekend for the city, for the team and for sports in general. It’s a great weekend in Buffalo.”

The Sabres also play the Capitals on at 3 p.m. Sunday, just hours before the Bills game.

Sabres winger Taylor Hall, who lives in Toronto during the offseason, said he and many of his teammates have developed an affinity for the Bills.

“Guys from all over, if they’re from Minnesota or Wisconsin, they all seem to have a soft spot for the Bills,” he said. “I think for myself, all my friends in Toronto are all Bills fans and have been cheering for them for ages. I never had an NFL team to cheer for before I signed here and it kind of was the perfect match.

“Not only is it cool to see how the guys respond but just driving around the city and seeing the support that the Bills have makes you want to accomplish that as a hockey team and to see what kind of support we could have if we ever got that far.”