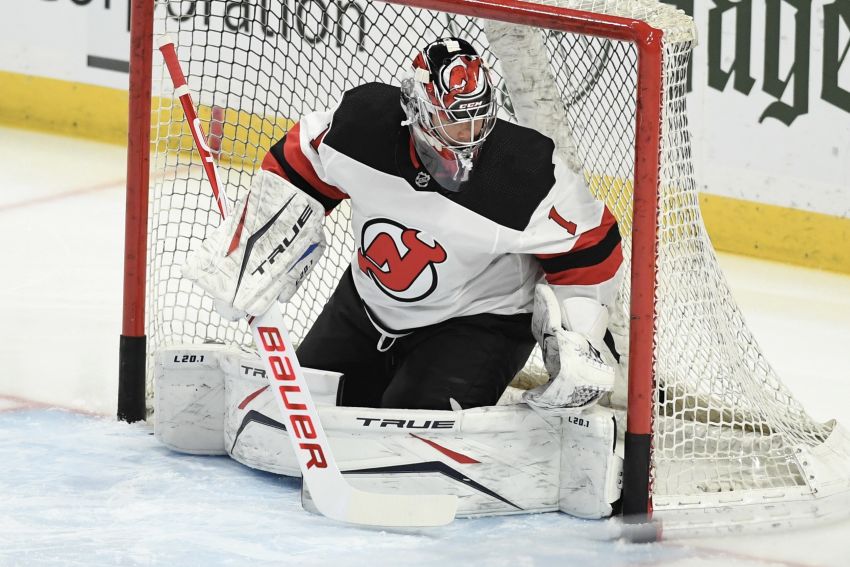 Eric Comrie played his only game for New Jersey in Buffalo. ©2022, Micheline Veluvolu

For the first time in five years, goalie Eric Comrie stayed put last season, playing for one team, the Winnipeg Jets, in one league, the NHL.

There was no shuttling between the big leagues and minors. There was no waiver claim and a sudden change of address.

Comrie, who signed a two-year, $3.6 million contract with the Buffalo Sabres last Wednesday, remained in Winnipeg, quietly establishing himself as a one of the league’s steadiest backups while playing a career-high 19 games.

“This year was kind of nice, I knew I had stability,” Comrie said on a Zoom call Monday. “It was really good for me, it helped me play better hockey just because I was like, ‘OK, I know, I’m going to be here, I’m not going to be going anywhere else.’ And for myself, it was a big thing.”

During the previous two seasons, he was a part of four organizations and played just four NHL games.

Comrie’s career has been an exercise in patience. He has played 208 AHL games over parts of nine seasons. He has been nabbed off waivers four times, including twice by Winnipeg, which drafted him in the second round in 2013.

“I always looked at it as an opportunity,” Comrie said of changing teams. “It’s always better to be wanted than not wanted, right?”

He spent 60 days with the Arizona Coyotes early in 2019-20, playing zero games before they traded him to the Detroit Red Wings. Following a 19-day run in Detroit in which he got into three contests, the Jets reclaimed him.

Comrie had a 37-day stint with the New Jersey Devils in 2020-21, earning just one game (coincidentally, he beat the Sabres) before, you guessed it, the Jets snatched him back again.

“There’s been a lot of times where it was tough, when it was tough to continue doing it, but hockey’s something I truly love doing and I love the game of hockey,” Comrie said. “I love playing, I love practicing. I love being there with the guys, I love skating and love working out. It’s what I like to do. … That’s just what kept me going, kept me driving.

Comrie’s latest move is the most significant of his career. The Sabres offer him a chance to possibly split action with veteran Craig Anderson, 41, or even grab the starting job.

Given his age and recent injury history, the Sabres can’t rely on Anderson to shoulder the load. Meanwhile, fresh off an injury-plagued year, prospect Ukko-Pekka Luukkonen is set to return to the minors for more seasoning.

“I feel like I can maybe earn some more starts and maybe work myself into a little more playing time,” said Comrie, who has played just 28 NHL games. “That was a big decision why I chose the Sabres.”

Comrie, 27, made that decision after some of the dust settled in free agency and several goalies found new teams. He had only spoken to the Jets before the market opened last Wednesday.

“Then all of a sudden, as soon as Buffalo called the 13th, we just knew it was the right fit and the right opportunity,” he said. “I was so happy to be there and I’m so thankful for the opportunity that I have.”

For Comrie, the opportunity is attractive on multiple levels. Sure, he should play more often. But he also believes he has joined an up-and-coming young team.

He said when the Jets played the Sabres last season, he learned the Sabres possess “a lot of potential, they’re a really good team.”

“All I’ve heard from guys since I’ve signed is, ‘Wow, you signed in an amazing spot. This team is really making the next step. A lot of guys are really good on this team who are establishing themselves now,’” Comrie said. “I’ve heard nothing but amazing things about their head coach (Don Granato), so I’m really excited.”

The Sabres believe Comrie’s work ethic and experience can help him reach a higher level.

“I’ve had another head coach in the National Hockey League tell me we’re going to kick him off the ice in practice,” Granato said Saturday. “And then a player that played with him who I coached said the same thing about 20 minutes later in a conversation. So he’s a hockey guy, he’s a rink rat, hockey is his passion. He now has experience. …

“He’s used that experience of being a backup and being competitive, he’s watched, and so he’s got that appetite for me. And we feel that if we give him more, that all those ingredients point to a high chance of success.”

An opportunity to work with Anderson could also help Comrie. He said the chance to bounce ideas off the NHL’s oldest goalie and develop a relationship with him is exciting.

In Winnipeg, Comrie backed up Connor Hellebuyck, the 2019-20 Vezina Trophy winner. He would sit down with Hellebuyck and the Jets’ goalie coach and break down video of all the goals opponents scored on Hellebuyck.

Comrie wanted to tap into Hellebuyck’s mind and learn how one of the NHL’s premier netminders processed the game.

“That was always a big help for me to really understand how he’s playing different scenarios,” he said. “We have a really good relationship because of that.”