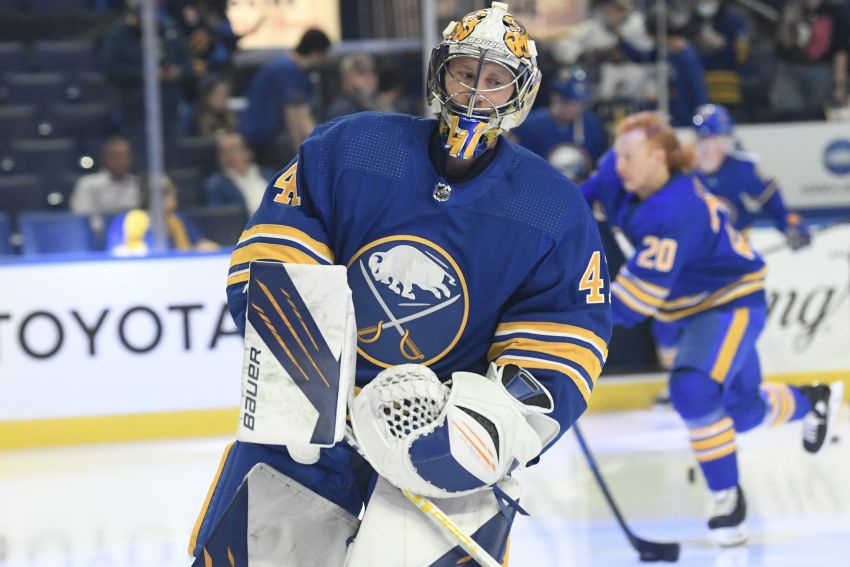 BUFFALO – At 40, an advanced age where most goaltenders have long been retired, Craig Anderson could be coveted before the upcoming NHL trade deadline.

For now, Anderson is the Sabres’ No. 1 goalie, an incredible accomplishment in his 19th season. During his limited action this season – an upper-body injury recently sidelined him 32 games – the veteran has been the Sabres’ backbone, giving the rebuilding team a calming, consistent presence in the crease.

Off the ice, Anderson relishes his other role as a mentor to the organization’s young goalies, including Ukko-Pekka Luukkonen, a rookie the Sabres on Wednesday assigned to the Rochester Americans.

Teams looking to beef up their goaltending depth or add a starter might be interested in trading for Anderson before the March 21 deadline. For perhaps a mid-round pick, a contender could acquire an influential asset for its playoff run.

Having spent last season as the Washington Capitals’ backup and third goalie, he proved he can play a secondary role, share his wisdom and be ready if needed. After appearing in just four regular-season games, he posted a .929 save percentage in two playoff contests.

“You can’t worry about outside noise,” Anderson said when asked about his future following Wednesday’s practice inside KeyBank Center.

However, Anderson, who signed a one-year, $750,000 contract July 29, kept his thoughts about the uncertain weeks ahead limited to the team.

“We have to internalize, keep the room closed and really look to each other to say, ‘Hey, something may happen, nothing may happen,’” said Anderson, who will back up goalie Dustin Tokarski tonight against the Columbus Blue Jackets. “I think it’s just continuing to grow as a group.”

Anderson makes a habit of stressing the team. He has performed splendidly this season, registering a 5-3-0 record with a 2.62 goals-against average and a .917 save percentage in eight games.

But his lasting impact in Buffalo will likely be the lessons and professionalism he instills in the team’s core group of young players.

If Anderson isn’t traded, he could depart in free agency or even retire. In the near future, the net will likely be awarded to Luukkonen, 22, a prospect labeled as the team’s goalie of the future.

Anderson’s career began in 2002-03, back in the NHL’s Dead Puck Era. He’s one of just a handful of players to have debuted before the lockout that wiped out the entire 2004-05 campaign.

The NHL’s oldest goalie has experienced a lot over his 660-game career. He understands the elements the Sabres need to create the right culture.

“The core guys are going to be here potentially long-term and you want to create, instill good habits and not get into the individual kind of thought process of, ‘Hey, I’m going to get my points and it doesn’t matter if we lose, as long as I score,’” Anderson said. “That kind of mindset can really demoralize a group as a whole and then it can also carry over into the following years when there are games on the line to make the playoffs.

“So it’s a matter of setting good habits. I think we got the veteran guys to try to kind of set the standard there and say, ‘This is the process, let’s do it right.’”

As long as Anderson stays active, he can keep making a little history. His victory Jan. 29 against the Arizona Coyotes, his first outing since Nov. 2, was the 296th of his career, tying him with ex-Philadelphia Flyers goalie Ron Hextall for 40th on the all-time list.

By the end of the season, Anderson might surpass some iconic goaltenders – Turk Broda and Billy Smith, for example – in wins.

“He’s done and accomplished so much,” Sabres coach Don Granato said. “But it’s just out of pure love for playing. Even coming back from the injury and jumping in the net ahead of time shows you that he didn’t need to do any of that and he does it because he enjoys the game still. He enjoys the practices and the camaraderie in the locker room. And by virtue of that love, he’s a great leader because he’s gained a lot of wisdom over the years.”

While Anderson said he hasn’t paid much attention to the names surrounding him, he knows if he can reach 301 victories, he will tie ex-New York Rangers goalie Mike Richter, another American, on the list.

“You got to set goals for yourself to kind of keep yourself motivated and keep pushing yourself,” Anderson said. “That’s definitely one of them as far on a personal standpoint.”