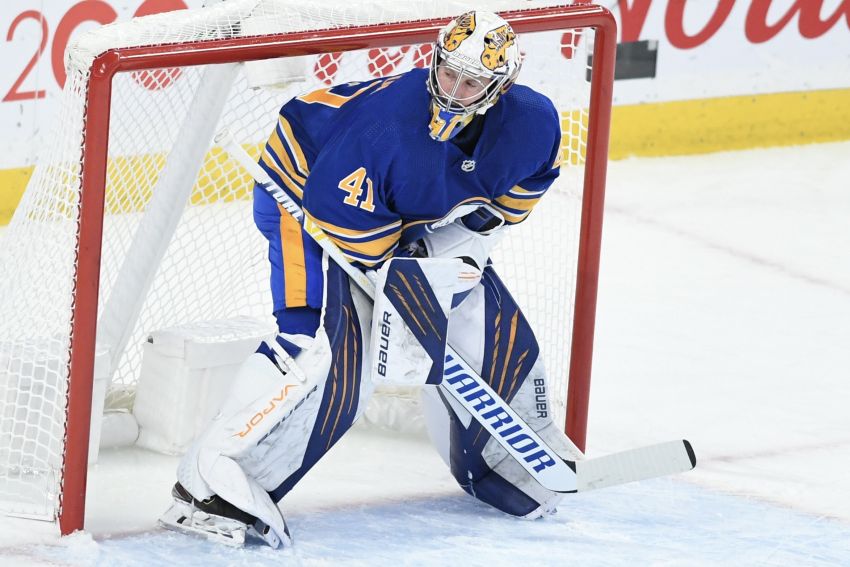 By 7 p.m. Saturday, the chaos the Buffalo Sabres had experienced earlier in the day became an afterthought. They could forget about COVID-19 and finally play their game.

As Sabres goalie Craig Anderson, 40, settled into his crease for the first time in 88 days following the national anthem, the energy he felt inside the rink brought back a special feeling.

“That’s kind of the moment where you’re like, ‘All right, this is still enjoyable, I still like it out here,’” Anderson said on a Zoom call following his terrific 27-save performance in Saturday’s 3-1 win over the Arizona Coyotes at Gila River Arena.

Anderson endured a rough recovery filled with stops and starts after suffering an upper-body injury Nov. 2, missing 31 games. Over the last three months, as the Sabres received some wonky goaltending, his absence was often glaring.

So having Anderson return on perhaps the most difficult day of a turbulent season – three more players, including defenseman Rasmus Dahlin, and one coach entered COVID-19 protocol – was huge.

“It was a nice finish to a really chaotic day,” coach Don Granato said of the Sabres’ 14th win this season. “I thought Craig was amazing, how simple he makes the game look in the net. He reads shooters so well you can see why he’s been a great goaltender in the league for a long time.”

The chaos started early Saturday, when several members of the team tested positive for COVID-19. Dahlin, defenseman Henri Jokiharju and wingers Rasmus Asplund and Victor Olofsson all missed the pregame skate, according to the The Buffalo News and The Athletic. Assistant coaches Matt Ellis and Marty Wilford left the ice during the skate.

Nothing official, however, was released. Granato said early in the afternoon everyone would be retested.

About 80 minutes before the game, the Sabres announced Asplund, Dahlin, Olofsson, Ellis and four members of the team’s traveling party had been placed in protocol.

With the Sabres 2,200 miles from home and recalls impossible, they had to field a lineup with 11 forwards and seven defensemen.

Luckily, in addition to Anderson, veteran winger Kyle Okposo returned from an upper-body injury that sidelined him three games.

Okposo’s power-play goal 7:02 into the contest opened the scoring.

“We talked a lot at the start of the year about the impact of Kyle Okposo and the impact of Craig Anderson, and they were extremely impactful tonight,” Granato said.

Sabres winger Peyton Krebs made it 2-0 at 15:07 before he set up winger Alex Tuch’s goal 7:14 into the second period.

Still, the triumph likely ranks as one of the Sabres’ most satisfying this season.

Okposo said the said day featured “a lot of unknown, a lot of uncertainty.”

“For me, personally, I’ve been out the past few games,” he said. “Coming back, excited to play and then it’s just boom, boom, boom, boom, boom, one thing after the other. Then all of a sudden, you just kind of pass the time along and you just try to get through the day until 7 o’clock and hopefully you don’t have any more surprises.

“It’s really what the day was. You just try to focus on coming together as a team for 60 minutes and get a win, and we did.”

Anderson, who improved to 5-2-0 this season, said he “felt like a kid again” while playing his 659th NHL game.

“I reminded myself tonight of kind of why I put in the work the last couple months,” he said. “Go out there and enjoy it and have fun. We’re playing a kids game. If it’s not fun, it’s not time to be playing.”

Notes: Granato said the Sabres “could potentially get a player back,” although he did not offer more details. … The Sabres play a road game tonight against the Colorado Avalanche. … The Sabres lost defenseman Will Butcher to an undisclosed injury early in the game. … Rochester Americans forward Ryan MacInnis suffered a lower-body injury in Saturday’s 4-2 loss to the Utica Comets and will likely miss some time, coach Seth Appert said. MacInnis, who played one game for the Sabres earlier this season, could’ve been in line for a recall.