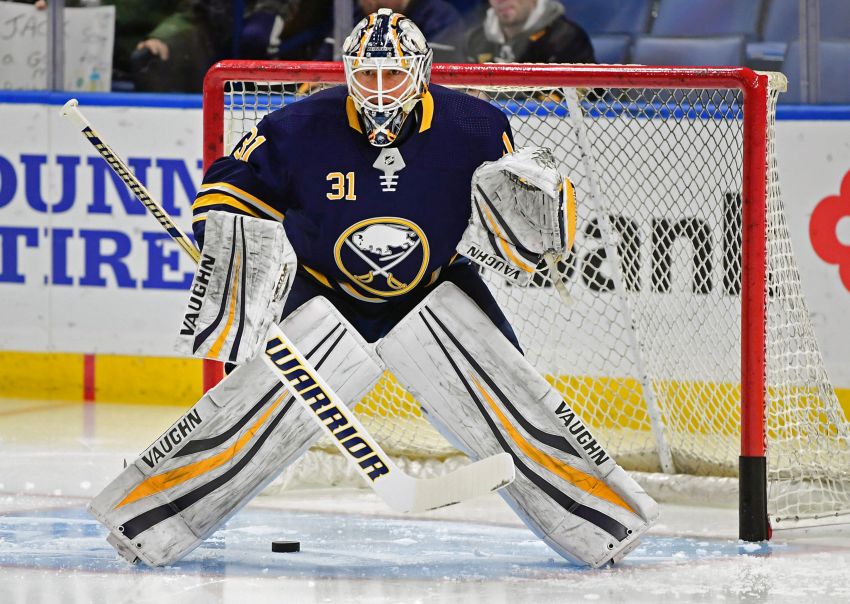 BUFFALO – Against the Tampa Bay Lightning, the NHL’s top team, you figure the Sabres would start No. 1 goalie Robin Lehner, who has played 42 times this season.

But Lehner, fresh off Sunday’s 5-4 home loss to Colorado, will sit tonight for backup Chad Johnson.

Why start Johnson, who has just three wins and zero at home?

“He played well last game in Boston and we lost a game,” Sabres coach Phil Housley said this morning inside KeyBank Center.

Indeed, Johnson looked good making 25 saves in Saturday’s 4-2 win against the Bruins. The Sabres, who have just seven home victories and 16 overall, need to win games.

Still, is there another reason? Do they want to keep Lehner, who could be traded before the Feb. 26 deadline, away from the potent Lightning? A poor outing could hurt his value.

Whatever the case, Johnson has an opportunity to find a groove.

“I’d love to get on a run, I’d love to get like two, three, four, five, 10 games in a row,” Johnson said. “I always find it’s a little bit easier that way. But again, I’ve never been in a situation where I’ve been given a leash longer than two games. If you lose one or two, it usually means I’m sitting for a little bit.”

The Sabres will make one lineup change, inserting winger Nick Baptiste for Jordan Nolan. Tonight will be the Sabres’ second game without top center Jack Eichel, who’s out indefinitely with a high right ankle sprain.

Here are Housley’s new lines from left to right:

Why is Pouliot on the top line?

“I liked his speed and his tenaciousness, he’s skating really well, he’s getting to the hard areas,” Housley said. “You can see the way he’s playing he’s had an impact on our team.”

The Lightning, which lost 4-3 Monday in Toronto, will give backup goalie Louis Domingue his first start since Jan. 30.