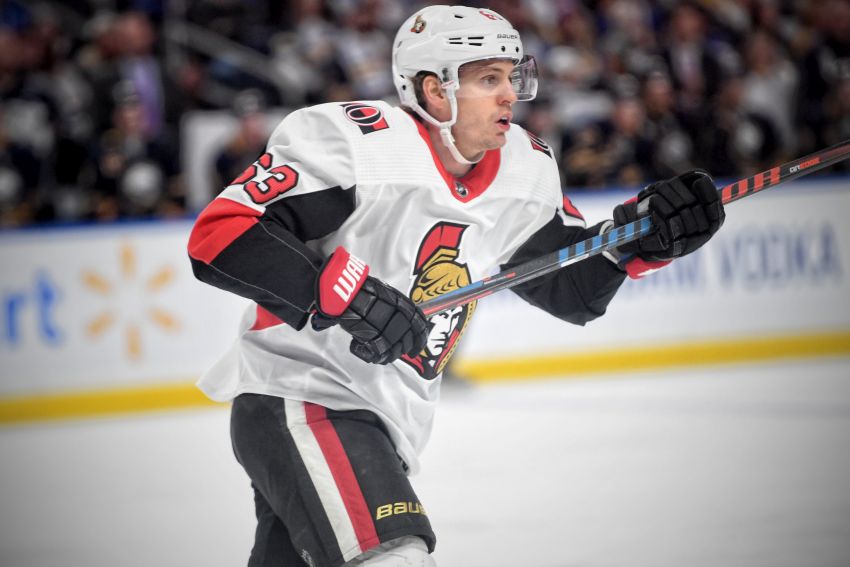 “We got the best job in the world,” Ennis said prior to scoring his 122nd NHL goal in the Ottawa Senators’ 4-2 loss to the Sabres on Saturday inside KeyBank Center.

While stardom eluded Ennis, who made his NHL debut Nov. 14, 2009, he keeps finding work. Teams want the former first-round pick to be a strong veteran presence.

“One of the reasons I think we brought him here is to keep it lose in the room,” Ottawa coach D.J. Smith said. “He’s a guy that’s always joking around. He takes his game serious, but he likes to have fun.”

Since the Sabres traded Ennis in 2017, he has become one of the league’s most well-traveled players, moving from Minnesota to Toronto to Ottawa, which signed the three-time 20-goal scorer to a one-year, $800,000 contract July 1.

“I’ve … gathered some information and wisdom, I guess you could say,” said Ennis, who battled concussions late in his career here.

Ennis, 30, developed a strong relationship last season with Smith, who was one of the Maple Leafs’ assistants.

Smith, 42, is one of the league’s youngest coaches.

“All he wants is work ethic, compete.”

The rebuilding Senators, one of the league’s worst teams, need plenty of that.

Ennis, who played his 563rd NHL game Saturday, has compiled five goals and nine points in 20 contests this season.

Incredibly, he had scored three of the Senators’ five power-play goals entering Saturday’s game. Yes, their power play is really that bad.

“He’s got to provide offense for us,” Smith said. “I think he has been really good on the power play. But more importantly, I think just doing right every day. We know that this is a process with young guys.”

Sabres winger Curtis Lazar’s 176-game career with the Senators might be best remembered for the time he ate some food thrown on the ice.

“Everybody remembers the hamburger,” he said. “That’s the biggest thing, I think.”

During goalie Andrew Hammond’s torrid stretch as a rookie in 2014-15, a fan celebrated the sensation nicknamed “The Hamburglar” by tossing a hamburger from the stands after a win.

Lazar, to the shock of many, picked it up off the ice and took a bite. Relax, it was still wrapped when it landed.

While Lazar, 24, never reached his high expectations with the Senators, he enjoyed regular duty for two and a half seasons before they traded him to the Calgary Flames.

“I had the chance to grow as a young boy as a man throughout that organization,” Lazar said. “I look back to playing on a line with Chris Neil, living with Chris Phillips and getting used to what it takes to play in the NHL.”

Lazar said the late Bryan Murray, Ottawa’s former general manager, had a huge impact on him.

“He … really welcomed me to the league and showed me what it’s like to be a good person in this game,” he said. “That’s something I really try to do myself.”

Notes: The Sabres scratched defenseman Colin Miller (healthy) for the second straight game. … Sabres center Marcus Johansson (upper body) missed his second consecutive contest. He will also sit out tonight’s road game against the Chicago Blackhawks. … Former Sabres goalie Anders Nilsson has enjoyed a strong season with the Senators, compiling a 5-4-1 record with a 2.76 goals-against average and a .925 save percentage in 11 outings. The Swede backed up Craig Anderson on Saturday.