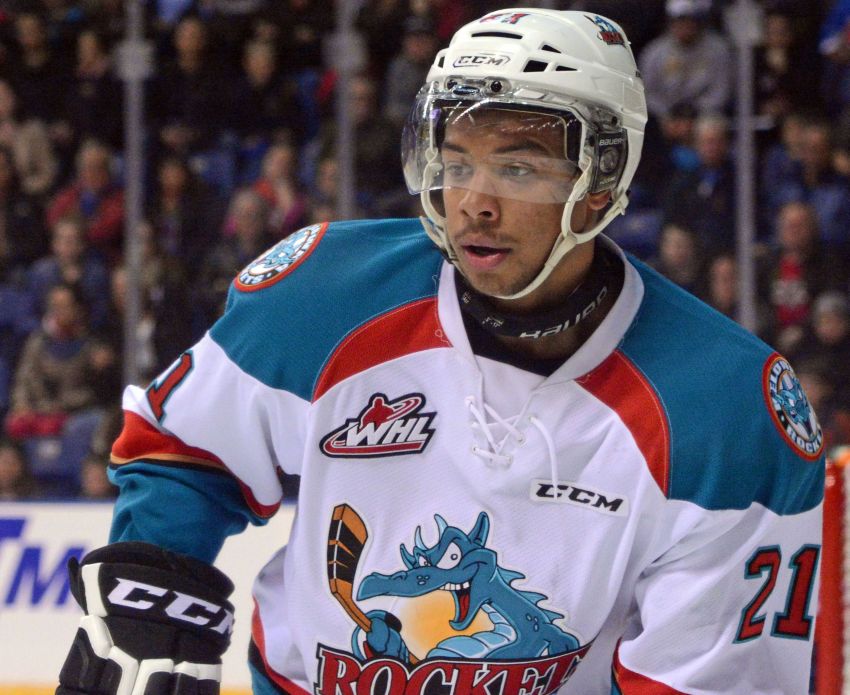 Devante Stephens was drafted in the fifth round. ©2015, Margaret Hickling, Olean Times Herald

SUNRISE, Fla. – For a few days during his year away from the NHL, Buffalo Sabres coach Dan Bylsma helped out a former teammate, Kelowna Rockets coach Dan Lambert, and ran some practices for the Western Hockey League team.

At least one youngster, Devante Stephens, a 6-foot-1, 171-pound defenseman the Sabres drafted in the fifth round, 155th overall on Saturday, caught his eye. Bylsma didn’t know it then, but Buffalo had a strong interest in the 18-year-old.

Stephens sat out early last season, so some teams didn’t notice him, said Greg Royce, the Sabres’ director of amateur scouting. Finally, some injuries opened up a spot.

“When … he did get the ice time, he’s a very good skater, (has) good puck poise,” Royce said Saturday following the NHL Draft inside the BB&T Center. “He’s not real flashy. He’s not going to wow you with things. But he makes the right play. …

“He’s going to put on size. He comes from an athletic background. I really firmly believe he will be a top-six defenseman in the NHL.”

The team’s scouts never told Bylsma they planned to take Stephens, whose father played football at the University of Maryland. When they selected him, Bylsma walked by the draft table, pumped his fist in the air and said, “Yeah.”

Stephens had four goals, 11 points and 33 penalty minutes in 64 games last season. If he turns out to be a steal, he could greatly help the Sabres’ 2015 draft.

Of course, center Jack Eichel, the second overall pick, could become a franchise cornerstone. But the Sabres traded the 21st and 31st selections in a deep draft to acquire goalie Robin Lehner and Ryan O’Reilly.

“From an amateur scouting perspective, you’re a little disappointed (about losing the picks), but then when you think about we got Robin Lehner, Ryan O’Reilly, our team’s getting so much better,” Royce said. “Absolutely. More than OK. The name of the game is we’re all on one team.”

Here’s more on the Sabres’ 2015 draft picks who weren’t profiled in Sunday’s paper.

Royce: “He’s a big defenseman, skates very well, good hockey sense, moves the puck. He’s going to St. Cloud next year, four years to develop there. When he comes out, he’ll have another year, two years in the American League and then be ready to play for the big club.”

Royce: “He’s a guy our Western League scout knows very well. He had a broken ankle or foot early in the year, didn’t train in the summer. The knock against him is he has to work on his skating but he knows how to score goals, competes hard. Kevin Prendergast knew him. He was very passionate about it.”

Royce: “Very good skater, handles the puck very well, good hockey sense. Four years (at UMass) to develop. He may come out early. He’s a ’95 born, so he’s 20 already. But with the development and the ability to get stronger, the college program, he could be a longshot.

“With a player like that, it might be a disservice, really, to get drafted. After he comes out we will be the only ones to have the ability. We firmly believe if we didn’t draft him in two years time they’ll be 30 teams knocking on his door trying to get him.”