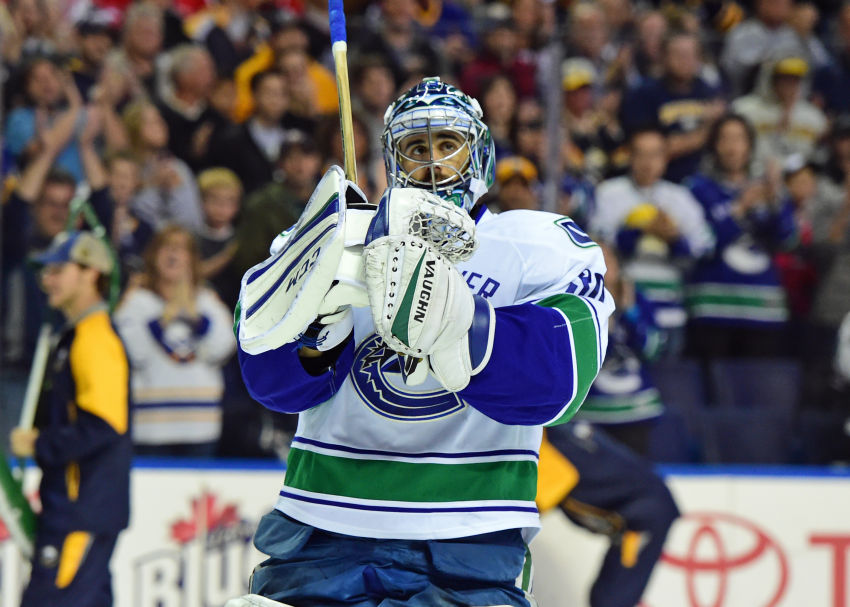 BUFFALO – Ryan Miller wanted to thank everyone in the building. So when the stirring video tribute honoring the former Sabres goalie ended Saturday afternoon, he skated out from his crease, raised his stick and turned around as he applauded the crowd that was roaring for him.

“I can take a second to turn around and make sure everyone knows it’s everybody and not just raising the stick,” Miller said following the Vancouver Canucks’ 3-2 loss to the Sabres, his first game as a visitor at the First Niagara Center. “It’s everybody in the building who helped me out when I was here or supported the team.”

Miller hadn’t been here since the Sabres dealt the former Vezina Trophy to the St. Louis Blues on Feb. 28, 2014. As expected, the Sabres’ all-time wins leader received a rousing standing ovation from the capacity crowd when the team played the highlights package during a first-period stoppage.

The video ended with a simple message: “Thank you, Ryan.”

“It’s nice to know you can come back here and people appreciate the way you came to the rink,” Miller said. “I tried to compete hard when I was here.”

“I owe a lot to him,” Ennis said. “He kind of started my career. … He showed a lot of faith in me and kind of made me what I am, gave me a chance. I was a really small player in junior.”

At one point that season, Desjardins told a struggling Ennis he should return to midget hockey to receive more ice time.

Ennis eventually morphed into an elite junior talent and a first-round pick, scoring 86 goals in his final two seasons. Desjardins, however, refuses to take any credit for Ennis’ success.

“He was always was a really competitive player, like always super competitive,” Desjardins said.

Ennis is forever grateful to Desjardins, “an amazing coach,” for giving him a shot.

“We still have a good relationship,” he said. “It’s no surprise to me that he’s done so well as a coach in the NHL.”

Notes: Defenseman Rasmus Ristolainen’s goal 19:43 into the third period was the Sabres’ latest regulation winner since Mike Grier scored at 19:55 on March 11, 2006 in Philadelphia, according to the Elias Sports Bureau. … Defenseman Jake McCabe led the Sabres with a career-high 23 minutes, 47 seconds of ice time. … Linus Ullmark became the first Sabres rookie goalie to make four consecutive starts since Miller started five in a row from Dec. 31, 2002 to Jan. 10, 2003. … Sabres rookie Jack Eichel has scored all seven of his points at home. Two assists gave the center his first two-point NHL game. … The Sabres scratched defenseman Carlo Colaiacovo (upper body) and forward Tim Schaller (healthy). … The Sabres had their first sellout crowd since opening night. … With an assist on Jamie McGinn’s second-period goal, defenseman Mark Pysyk became the final Sabre to record a point this season.

Watch the @RyanMiller3039 tribute that just played on our video board. #ThankYouRyanhttps://t.co/fbeG16Usek