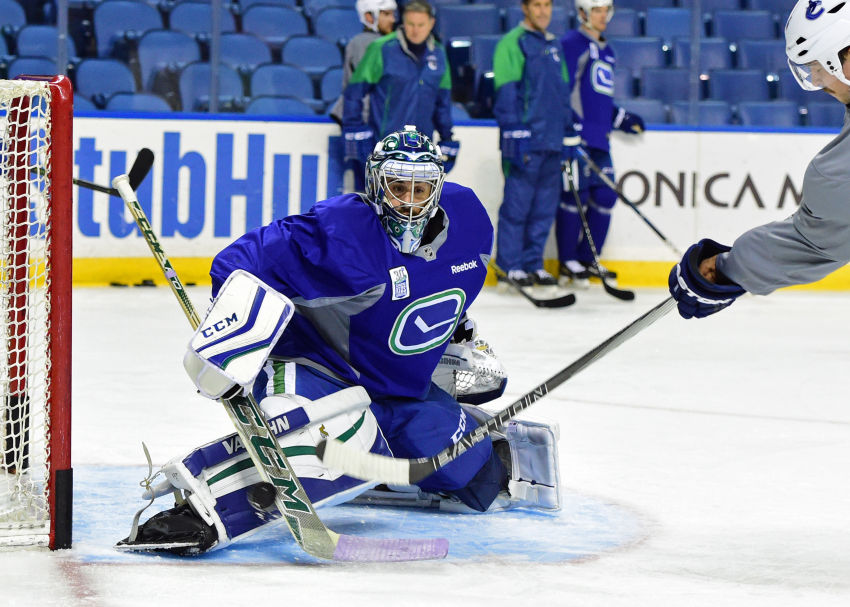 BUFFALO – Part of what makes this city a great place, former Sabres goalie Ryan Miller believes, is once you show people who you are and they accept you, Buffalo will always be a part of your life.

Miller, whose Vancouver Canucks face the Sabres this afternoon, spent nine seasons in Buffalo not only as the starting goalie, but as a face of the franchise in the community.

That’s why returning to Buffalo – today will be Miller’s first game at the First Niagara Center as a visitor – is so special for the former Vezina Trophy winner, one of the Sabres’ all-time greats.

Miller, 35, hasn’t been back since the Sabres traded him to the St. Louis Blues on Feb. 28, 2014. Naturally, the experience is “a little surreal” and “a little bit emotional,” he said. The transformation around downtown and throughout the area wowed him. He stopped by Roswell Park Cancer Institute to visit children before practice Friday.

“It’s fun to see how things have changed,” said Miller, who was injured when Vancouver visited last season. “Maybe staying away is a little bit of a shock to the system to come down here and see so much has changed. I’m really excited for the city in that regard. There’s some really nice things happening.”

The Sabres will almost certainly honor their all-time wins leader this afternoon, and the fans, who never got their chance to give Miller his proper sendoff, will likely roar. Several former Sabres stars have received nice ovations in recent seasons. Miller’s could be the most rousing.

Miller hasn’t thought much about what today could feel like.

“I’m still trying to wrap around that,” he said. “I just kind of wanted to get through practice today and see how that went. But it was fun being in the building again. … It was fun to be back on that ice, for sure. … As far as how the game is going to go and emotions or whatever, just take it as it comes.”

Miller’s life has changed since the Sabres dealt their biggest asset in the midst of a major rebuilding process. He struggled with the Blues, failing to help them past the first round of the playoffs.

Still, Miller, at an age when most goalies are graying, is thriving in the second season of his three-year contract. His 2.14 goals-against average and .923 save percentage are among the league’s best.

“I feel good,” Miller said. “I’ve always been a late-bloomer, so maybe I’ll get it figured out in my mid-30s. … I think just my mental approach is just that I’ve seen a lot of ups and downs and I’ve seen a lot of different things. I just try not to put too much stock into anything other than I want to just be out there and compete and I want to make saves.”

Being a father to an 8-month-old boy, Bodhi, has helped change him.

“I think just mainly just coming back from the rink … you have even more perspective,” he said. “I tried to give myself perspective and proportion here in Buffalo trying to be involved in things outside the rink, but I think this is definitely something that adds to that or is bigger than that for me, so it’s been fun.”

Less than two years after Miller left town, only eight former teammates are still with the Sabres.

Their memories of Miller, whose influence is still felt, are special.

“He’s such a pro,” Sabres winger Tyler Ennis said. “I remember him coming to the rink every day working hard, especially in practice. He spent a lot of time on the ice. He was usually one of the last guys off the ice. He competed on every puck. He got upset even when you put a puck in on the rebound when another guy was coming down and shooting it. So he didn’t want any pucks in the net.”