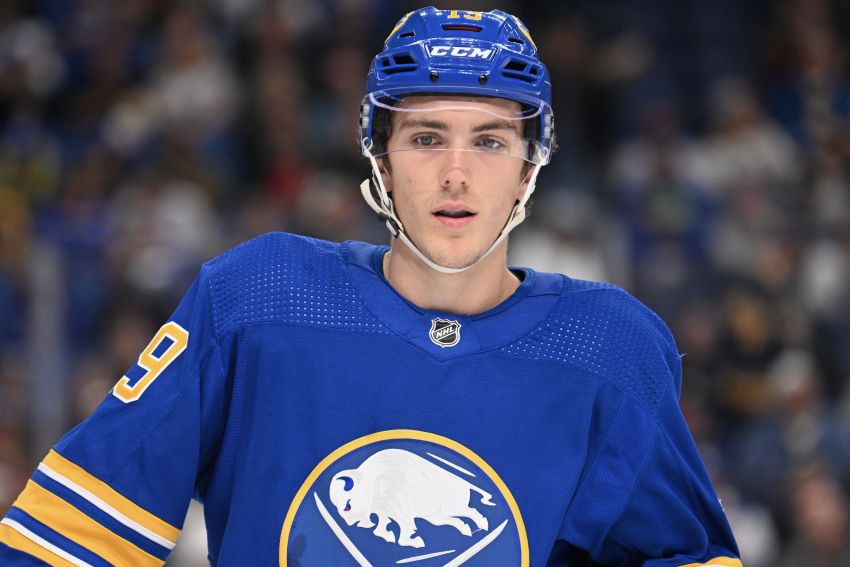 PITTSBURGH – With the Buffalo Sabres trailing by one goal in the waning minutes of Saturday’s 3-1 loss, winger JJ Peterka set up a splendid scoring chance for linemate Jack Quinn at the top of the right circle.

But instead of unleashing a shot on goalie Casey DeSmith, the rookie quickly passed to center Dylan Cozens, who couldn’t handle the puck in the left circle.

“Everybody watching wishes Jack Quinn would have taken that shot when he was sitting right where he was,” coach Don Granato said following the Sabres’ second loss to the Penguins in as many nights.

After the Sabres botched their terrific opportunity to tie it, superstar Sidney Crosby scored his second goal of the night at 18:22, sealing the Penguins’ fifth consecutive win.

Despite the loss, the short-handed Sabres – winger Jeff Skinner (suspension) and defenseman Henri Jokiharju (lower-body) both missed the game – outplayed the Penguins, shaking off a slow start before the crowd of 18,414 fans at PPG Paints Arena.

The Sabres fell behind 2-0 before they registered a shot, as Rickard Rakell scored a power-play goal at 4:22 and Crosby scored his first goal at 6:51.

“We gave up … two power plays to them early,” Granato said. “They killed two penalties and that got the crowd in it, that got them energized. I thought really, we were able to swing momentum at some point in that first and they were willing to just defend the rest of the way it seemed.”

“We gave up a couple early,” said Mittelstadt, who subbed for Skinner on the top line and No. 1 power-play unit. “I thought we weathered it from there, though. I thought we had just a ton of chances.”

The Sabres consistently generated scoring chances over the final 50 or so minutes. Overall, the NHL’s highest-scoring team pumped 38 shots on DeSmith.

Still, the Sabres could’ve had more if they stopped looking for the perfect play or simply hit the net.

“Maybe a couple times there we tried to make the extra pass or the cuter play and we had a good shot,” Mittelstadt said. “It’s a hard balance because a lot of times you make that play and it’s a goal and other times you don’t and then you’re being told to shoot.”

Granato said the Sabres needed to get more traffic to the net and “could have had a greater shot mentality.”

“Sometimes you score a lot of goals and you get a false sense of confidence that you can make things pretty all the time,” he said. “We forwent the scoring gritty and just shoot the puck and going for second chances on some occasions that I thought would have helped us.”

Krebs, who sat out as a scratch late last month, scored his first goal this season on Wednesday.

“At the start of the year I was maybe a little tense trying to do so much and now I’m just trying to keep it simple,” he said. “Whether I have a good shift and hand it off or step on the ice and try to be my best player.”

Sabres captain Kyle Okposo, Krebs’ linemate, said: “He works extremely hard and he’s hard on himself but he’s learned to spin his attitude into a positive and really just come to the rink with a smile and be happy and just work on his game.”

With Jokiharju week to week after getting injured early in Friday’s game, the Sabres on Saturday recalled defenseman Kale Clague from the Rochester Americans.

While the Sabres already had an extra defenseman in Lawrence Pilut, Clague, 24, played against the Penguins, his eighth NHL appearance this season. Pilut sat out his third straight game.

“We liked Clague when he was last up and we had the opportunity to put him in,” Granato said of why Clague played over a healthy Pilut. “We were excited to see his progress. … He’s progressed really well, and I thought it was an opportunity to see that. Even when he left us, he left on a really good note.”

In his first six starts, Sabres goalie Ukko-Pekka Luukkonen often looked a little shaky. The rookie wasn’t bad, mind you. He wasn’t, however, a difference-maker.

On Saturday, Luukkonen stopped 28 shots, enjoying one of his best outings this season.

“First five, 10 minutes, he was still even good there, I felt,” Granato said. “And then the building is allowed to get in some excitement with a couple of power plays and a goal, and I thought that the next five or 10 minutes, I thought he was real good also and settled in and had some calm. Then he didn’t have a ton of action but he had a solid game.”

Penguins defenseman Kris Letang played his first game Saturday since suffering a stroke Nov. 28. Letang, 35, received a rousing ovation when his name was announced in the starting lineup.

Notes: Sabres defenseman Rasmus Dahlin played a career-high 30 minutes, 19 seconds. … Crosby, who also added an assist, has compiled 27 goals and 80 points in 56 career games against the Sabres. … The Sabres also recalled winger Brett Murray from the Amerks. Murray, 24, skated in the pregame warm-up but did not play.

Update: Murray has been sent back to Rochester.