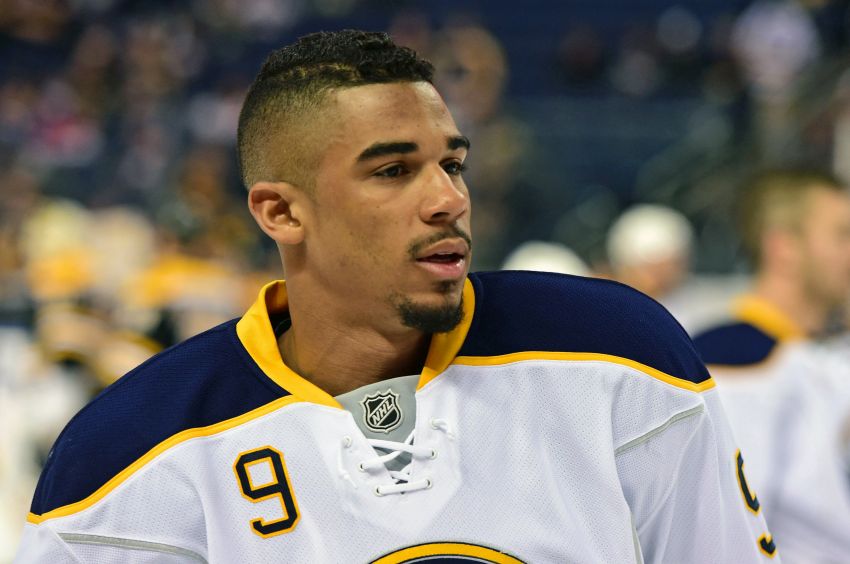 Buffalo Sabres winger Evander Kane has been arrested and charged with one misdemeanor count of criminal trespass and four counts of non-criminal harassment in connection with an incident at a downtown bar last month.

Kane, 24, turned himself into Buffalo police this morning and was handcuffed before being released, according to multiple reports. He is scheduled to appear in court Aug. 1.

Kane’s attorney, Paul J. Cambria, told The Buffalo News, “Without a doubt, he plans to defend himself against these charges.”

Aug. 1 update: Kane has pleaded not guilty and is scheduled to appear in court again Sept. 9.

Update: Three women allege Kane grabbed them by the arms, hair or neck inside and outside of the bar, Buffalo police downtown district chief Joseph Gramaglia told reporters at a briefing this afternoon.

Kane has also been charged with disorderly conduct, Gramaglia said.

The disorderly conduct and trespassing charges stem from a complaint filed by a male bar employee who removed Kane.

No one was injured, Gramaglia said.

Update: The Sabres released the following statement this afternoon: “We are aware of the charges against Evander Kane stemming from an incident last month. Our organization will have no further comment at this time.”

This is Kane’s second off-ice legal incident in eight months. In December, he was under investigation for an alleged sex offense at a downtown hotel. He was cleared of wrongdoing in March.

Sabres general manager Tim Murray on July 1 said Kane must “behave himself a lot better than he has.”

Update: In a statement, NHL deputy commissioner Bill Daly said the league is monitoring the situation but won’t take any disciplinary action at this time. If necessary, Kane will be directed to NHL/NHLPA behavioral health professionals for evaluation and counseling.