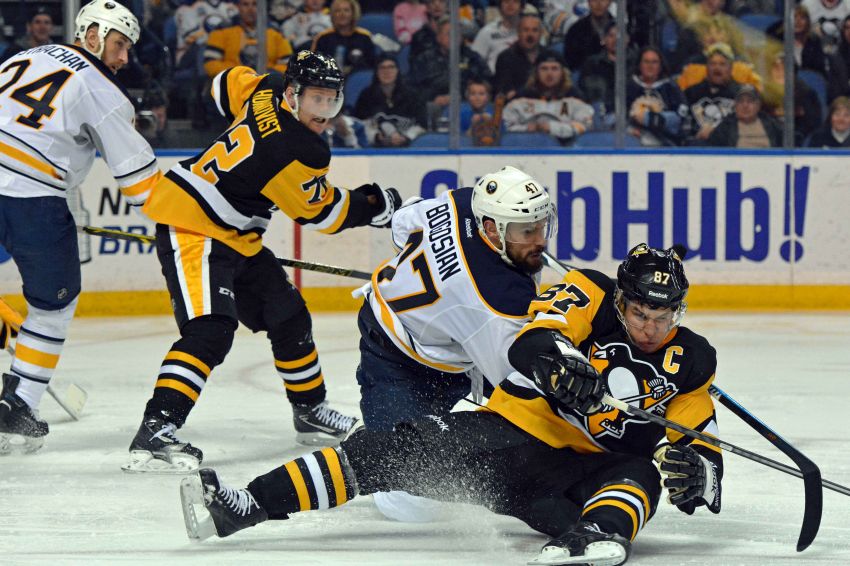 BUFFALO – The roughest season in the Sabres’ 45-year history is finally over, a 2-0 loss to the Pittsburgh Penguins on Saturday capping an 82-game slate that was tumultuous from start to finish.

The outcome, of course, hardly mattered. The rebuilding Sabres, who never quit throughout the campaign, had already locked up 30th place and either the first or second draft pick in next Saturday’s draft lottery.

The season finale was about regaining some normalcy, hearing some of those Sabres fans who had cheered for the opposition recently inside the First Niagara Center start rooting for the hometown club again.

Sabres president Ted Black started the crowd with a “Let’s go Buffalo” chant seconds before the Penguins hit the ice. When they skated on, the capacity crowd of 19,070 fans booed them.

Fans roared for the Sabres before the opening faceoff and again following the final buzzer.

“This is a great hockey town,” Sabres center Matt Ellis said. “I’ve been here long enough to know we have an extremely passionate fan base. To get the cheer going early for the boys, it was a nice feeling at the end of the year.

Sabres winger Tyler Ennis added: “Our fans were great all season and we really appreciate it.”

Like a lot of times this season, an opponent simply overmatched the Sabres. The reeling Penguins needed the game to make the playoffs.

Brandon Sutter scored twice, breaking the tie 14:23 into the second period and sealing it 8:26 into the third period. Penguins goalie Marc-Andre Fleury made 28 saves for his league-leading 10th shutout.

The Sabres held Sidney Crosby scoreless, ending the superstar’s 19-game point streak against the Sabres. The center had a point in all of his 15 visits here before Saturday.

What’s next for the Sabres?

They’ll clean out their lockers this morning. Sabres coach Ted Nolan’s future appears iffy at best. Nolan, who signed a three-year contract late last season, seemed somber following the game. He wouldn’t speculate on his future, only saying he thinks “about today.”

The Sabres also have that oh-so-important draft lottery. If fans needed one more reminder Connor McDavid or Jack Eichel will be in town next season, Black gave it to them before pulling the winning ticket for a third-period drawing, saying, “This will be the second-most important lottery.”

One thought on “Sabres close tumultuous season with loss to Penguins, hear cheers”