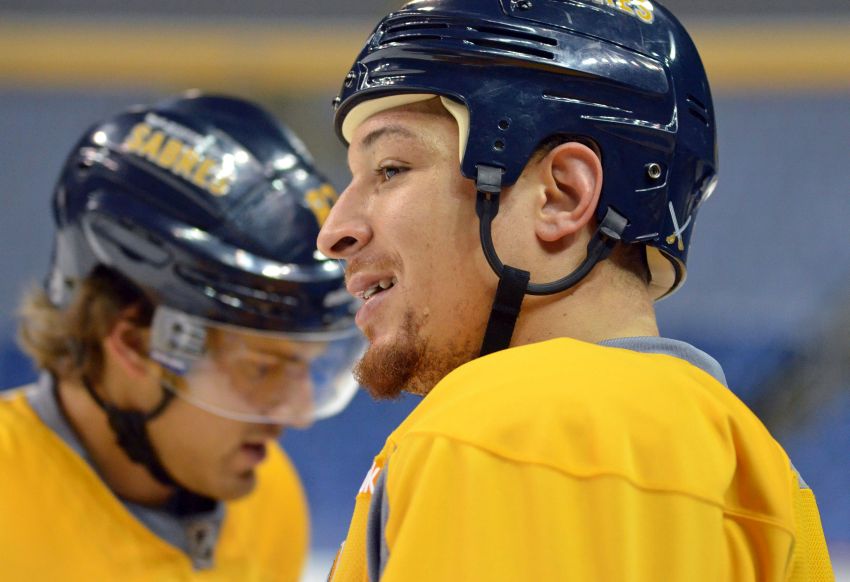 TORONTO – Incredibly, tonight’s tilt against the Maple Leafs, Chris Stewart’s 392nd NHL game, will be his first appearance in his hometown.

Toronto’s the only city the 26-year-old Buffalo Sabres winger hasn’t played in.

“My first year I got healthy scratched here, and then the lockout year we didn’t play the East, and then the one time I got traded to St. Louis and they already played here earlier in the year,” Stewart explained this afternoon inside the Air Canada Centre.

Cost aside, tonight will be a special experience. Stewart’s father, Norman, has a ticket.

“When my brother was playing in Florida, he was still in his Habs gear going to the game,” Stewart said.

In other news, the Sabres will use the same lineup tonight that won 2-1 Saturday in San Jose. Michal Neuvirth will start in goal. Jonathan Bernier will start for the Leafs.

“Playing in Toronto, period, brings out the best in anybody,” Sabres coach Ted Nolan said. “Anybody who grows up in Canada knows how it is to play here.”

Tonight will be rookie center Sam Reinhart’s eighth appearance. He can play nine before his contract kicks in.

Nolan said the Sabres haven’t discussed his future yet. He said he’ll sit down with general manager Tim Murray soon.