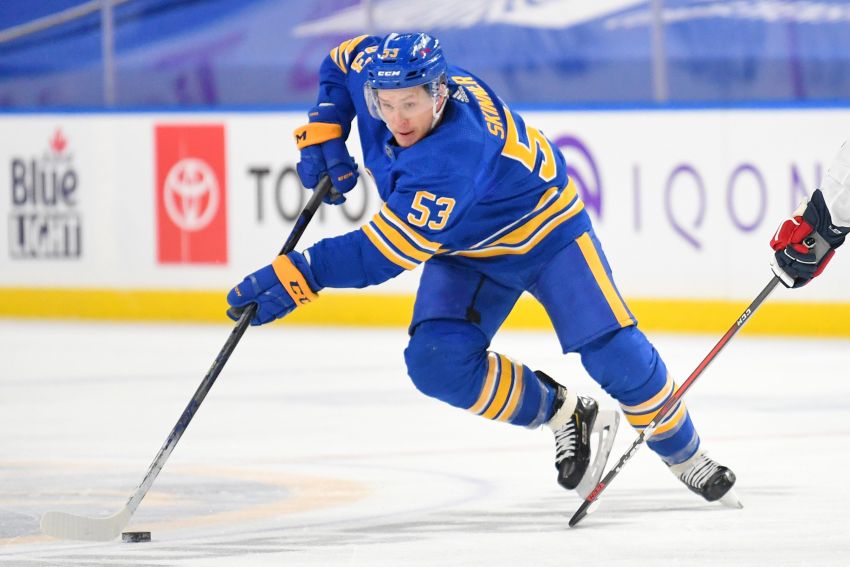 BUFFALO – A day after getting jettisoned to the taxi squad, winger Jeff Skinner practiced in his regular fourth-line spot with the Sabres’ main group Friday, a sign his three-game benching could end this afternoon.

“I just want to underline again that we are not going to reveal any lines or roster until tomorrow morning,” coach Ralph Krueger said on a Zoom call after the Sabres prepared for this afternoon’s game against the Philadelphia Flyers at KeyBank Center.

Skinner, 28, has endured the toughest week of his 11-year career, becoming a healthy scratch for the first time ever.

Sitting one game, of course, was a huge deal. Skinner is in the second season of an eight-year, $72 million contract.

Watching three contests and getting dumped to the taxi squad for a day might’ve done lasting damaged to the player-coach relationship.

“I love being a Sabre,” Skinner said. “I love the city of Buffalo. I wouldn’t have chosen to stay here if that wasn’t the case. That answer is simple: no.”

Skinner and Krueger still don’t appear to be on the same page. They’ve remained tight-lipped about what has transpired behind the scenes, choosing their words carefully.

“We have talked,” acknowledged Skinner, who has scored zero goals in 14 games this season. “Again, I don’t feel like it’s constructive, I don’t think it’s respectful to get into details on what we’ve talked about or long we talked or any of those details.”

Krueger hasn’t offered many specifics into his expectations for Skinner, who has mustered just three goals in his last 45 outings. Instead, Krueger usually responds to questions about Skinner by talking about the team as a whole.

“You need to look at everything I’ve spoken about over the last year and a half,” Krueger replied when asked what Skinner must show him. “The principles we expect everybody to do their best at executing. If principles are off here and there, sometimes the player might have an injury or fatigue or other reasons. Sometimes they just don’t embrace and if they do they will be rewarded with minutes played, goals.

“We are an environment of accountability and you need to earn your keep here on this group every single game and every practice. What I’m telling you doesn’t only apply to Jeff. It applies to every player on our team and if somebody slips there are different ways to deal with it.”

“This is a growth opportunity for Jeff,” he said. “I feel that he’s embraced it and that he’ll come out of it a better player.”

But Skinner hardly sounded like he used the last three games as an opportunity to study the action.

“I don’t think you learn anything extra by not being out there,” he said. “I mean, but obviously, this situation is maybe not that straightforward in the fact that lessons being learned is maybe more of a vague concept. In that sense, it’s tough when it’s so vague to come to a concrete answer.”

Skinner, who scored a career-high 40 goals in 2018-19 under former Sabres coach Phil Housley, couldn’t say if he sees eye-to-eye with Krueger.

“I don’t know,” he said. “He has 23 other guys to worry about. He has a team to coach. I just have to play hockey. That’s just all I want to do is play hockey, help my teammates try to win the game and that’s as simple as it is. To me, it’s not relevant, really, whether we agree in everything in our lives or everything about hockey.

“I think it’s human nature. No one agrees on everything and everyone is different. Everyone sees the game, sees life through their own lens and makes their own judgments and makes their own decisions. At the end of the day, it’s about winning hockey games and just trying to be a part of that.”

Krueger acknowledged earlier this week that benching Skinner would be a big deal. He knows the noise likely won’t stop until Skinner plays again.

But Krueger has the backing of Adams and Sabres owners Terry and Kim Pegula to run coach his team the way he wants.

“I’ve just had nothing but support on the obsession I have in driving in the culture here in Buffalo that gives us a chance not only short- but long-term to be successful,” Krueger said.

Krueger said Adams and ownership understand there will be “some bumps and bruises and confrontations and adversity” along the way.

“The noise that was going to happen in this decision was clear, but it doesn’t allow us to compromise on the process. And if we don’t compromise, we won’t have any regrets, we will have truly done what we believe we needed to do on a given day to get the most out of this group and will continue to do that with passion moving forward.”