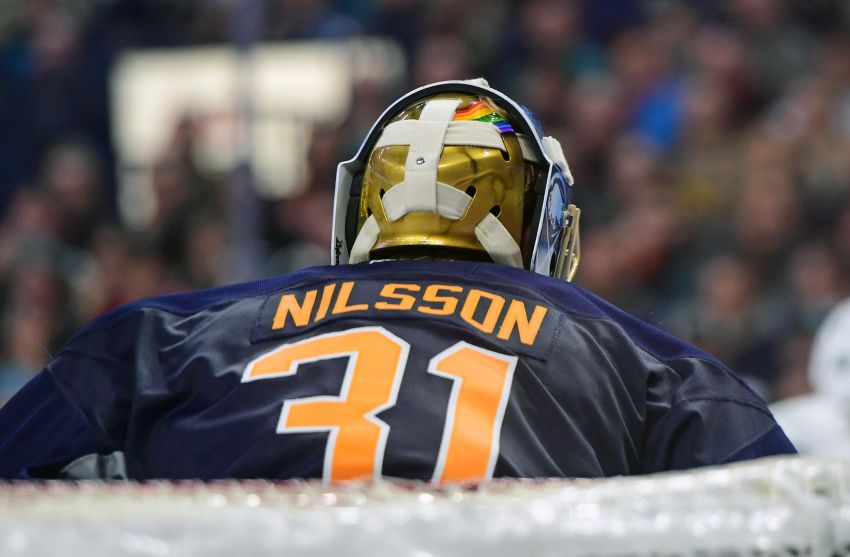 Anders Nilsson has been sporting a Pride Flag on the back of his mask. ©2017, Dan Hickling, Olean Times Herald

“They said we were the first team in North America to do that,” Nilsson said Sunday. “That’s when … I thought, ‘Why not be the first goalie to put it on the mask.’ I have a couple friends that are gay. I had a personal side to it, too. I think it’s an important topic and it’s something that needs to be talked (about).”

On Tuesday, “You Can Play Night,” Nilsson tended goal in the Sabres’ 5-4 overtime win against the San Jose Sharks at KeyBank Center wearing a mask that featured the Pride Flag on the back plate. His masks this season have all featured the flag.

The “You Can Play Project” advocates for “inclusion, acceptance and respect of LGBTQ athletes in sports.” Nilsson, 26, is the Sabres’ ambassador throughout February for the NHL’s “Hockey is for Everyone” month, something he called “a huge honor” for “such a good cause.”

“It means a lot to me,” Nilsson said. “I hope I can help some people. If they have any questions, they can feel free to ask me anytime, any day of the week. It’s really fun.”

He added: “Some kids quit sports, team sports, because they’re gay. I think that’s a big problem and it shouldn’t happen. You should have a right. You should be OK to play sports … if you’re gay, lesbian or whoever you like. It shouldn’t matter.”

Nilsson said the reaction to his mask has been “mostly positive.”

“It’s obviously a topic that needs some attention to it,” he said. “That’s why the league is bringing it up this month. I think it’s really good.”

About half the Sabres used Pride Tape during Thursday’s warm-ups.

“That’s part of the sport to welcome everyone,” said Sabres center Zemgus Girgensons, who used the tape.

The tape hit the market about 11 months ago and is available at pridetape.com, said Jeff McLean, senior creative director of Calder Bateman Communications. Just over 20 NHL teams plan to use it this month, McLean said.

Nilsson, Sabres coach Dan Bylsma, captain Brian Gionta and center Ryan O’Reilly also recorded a public service announcement in support of “You Can Play” that was shown during the game.

“‘You Can Play’ initiative is a great program for the league they’ve embraced and encompassed,” Bylsma said. “The game’s a great game for all orientations, regardless of who you are and what you are. I think it’s a great inclusion that we have and happy that Anders is showing it.”

OK, so if the Sabres need a fourth-line center – they’ve been using Nick Deslauriers sparingly in that spot, forcing them to essentially use only three trios – why did they assign Derek Grant to the Rochester Americans?

“A little bit of waiver wire ruling,” Bylsma said. “No one else put a claim in on Derek, so unimpeded he could be assigned to Rochester. We have 23 guys on our roster right now. So a roster spot would have to be cleared for Derek to be on our roster. That’s the case on paper.”

The one-year, $650,000 contract extension the Sabres announced for Justin Falk on Monday was special to the depth defenseman and his wife, Karissa.

Falk, who was scratched Tuesday, has played for five organizations in the last five seasons.

He began the year in Rochester and commuted for months. Karissa and the couple’s children finally moved to Buffalo last week.

“As much as this was an exciting few days for me, it’s equally exciting for her and what she’s all done for being my support system there, not having things easy for herself, either, with the kids and transitioning all the time, too,” Falk said. “So a very good few days for the family.”

Bylsma said Falk, who was recalled from the Amerks in early November, has been “a natural fit.”

“He’s a guy who’s proven he can play in the league,” Bylsma said.