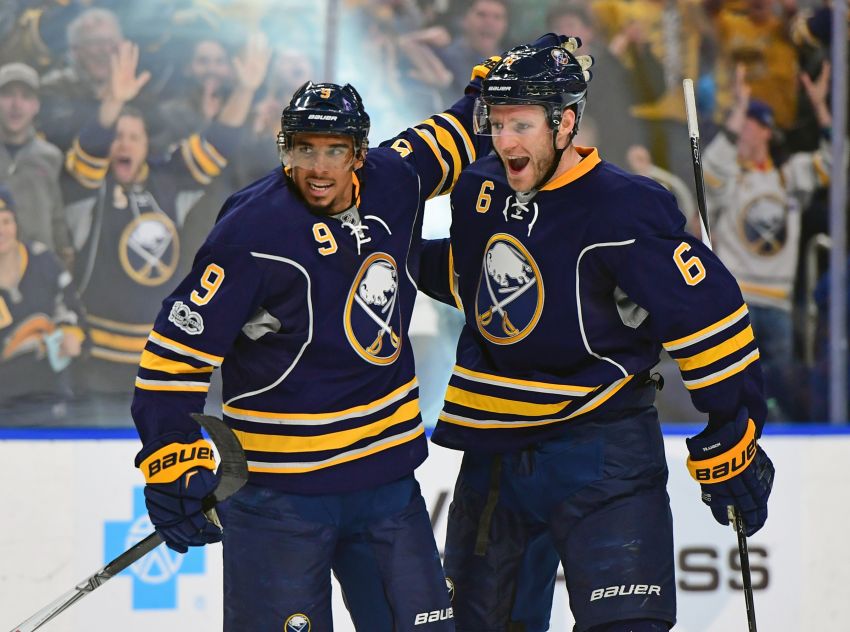 BUFFALO – Almost halfway through the third period of Tuesday’s rollicking, come-from-behind 5-4 overtime win, the Sabres looked finished, headed toward an ugly loss that would’ve given them sole possession of last place in the Eastern Conference.

No kidding. When the disjointed Sabres trailed 3-1 after 40 minutes, the frustrated fans inside KeyBank Center booed them off the ice. Less than seven minutes into the third period, the Sabres fell behind 4-1.

But minutes later, the Sabres, who had trouble completing simple passes much of the game, started throttling the Sharks, the reigning Western Conference champions.

Ryan O’Reilly scored on the power play at 9:03. Shortly after another power play expired, Kane scored at 11:36, beating Sharks goalie Martin Jones with a wraparound.

“As soon we scored the second one we got a lot of momentum,” Sabres goalie Anders Nilsson said.

By then, the crowd of 18,462 fans sensed something special was happening. When Kyle Okposo tied it at 12:31, the building exploded.

“I thought we were going to win the game in regulation with the way we were playing,” Bylsma said.

Still, the Sabres carried all the momentum into overtime. When Bylsma saw Eichel and Kane zooming up and ice, he knew a win was imminent.

“You just got the feeling both those guys driving to the net, that kind of speed, it was going in the back of the net,” Bylsma said.

Kane said he knew no one would catch them.

“That’s not being cocky, that’s being honest,” he said. “I saw him come around the net and I knew just to get to the middle of the ice. He was going to beat his man and I was going to beat mine. He’s able to feather one through.”

Kane connected on Eichel’s pass at the left tip of the crease, then crashed hard into the boards, his right hand taking the brunt of the impact.

“We get the building going, get some energy in here after they were booing us off the ice and we win a game in overtime and everyone loves us again,” Eichel said. “It’s interesting how that works.”

The Sabres erased a three-goal deficit to win for the first time since a 4-3 shootout win Dec. 27, 2014 against the New York Islanders. They hadn’t overcome a deficit of three or more goals that late since winning a 5-4 shootout Nov. 2, 2006 in Boston, when they scored at 11:11 of the third period, according to the Elias Sports Bureau.

Following the game, Kane’s hand was wrapped in a towel. Bylsma said he was fine.

Not only did the Sabres win in dramatic fashion, they knocked off one of the NHL’s best teams.

“We didn’t come back against a poor team; we came back against one of the better teams in the league,” Bylsma said. “It should be a big boost for our guys.”

He added: “We talked about it after the first period, this is a game we go to learn how play in and learn how to win it.”

Incredibly, the Sabres are now 17-1-1 all-time against the Sharks at home.

Despite the dramatic comeback, the Sabres know they played poorly for much of the contest.

“That’s probably the worst we’ve played and gotten a win,” Okposo said. But in saying that, we never gave up and it’s a huge win for us. … We’ve been saying it for a couple months, we’ve got to find ways to win games, and I guess that’s one of the ways.”

Ennis added: “We’ve kind of had a few games like that this year where we’ve had to come back. I think we’ve got a lot of character and we knew this is playoff hockey and we can’t lose.”