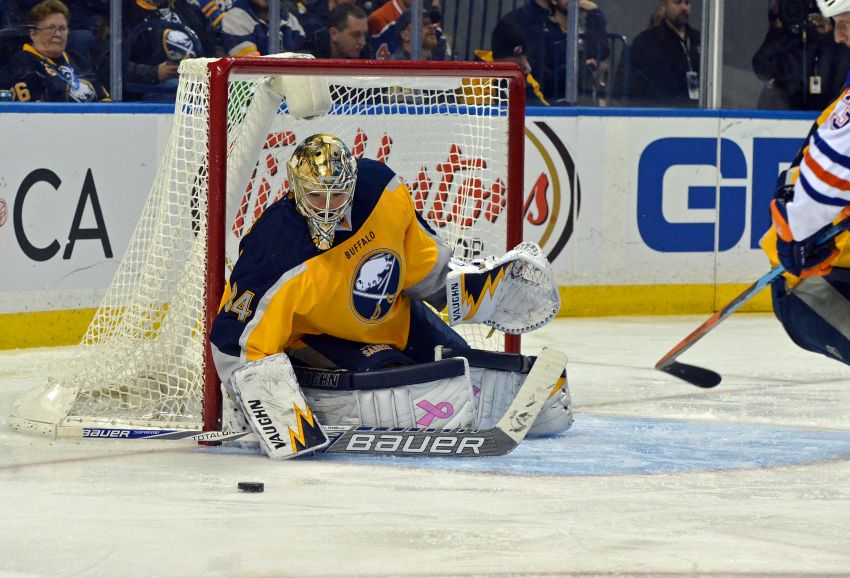 BUFFALO – Fifteen games into another trying season, goaltending has been the Sabres’ only constant each night.

Despite some wretched efforts and an anemic offense on pace to be the worst in NHL history, Michal Neuvirth and Jhonas Enroth have kept the Sabres in almost every contest, stopping a barrage of shots.

On Friday, the Sabres laid another egg, allowing the hapless Edmonton Oilers to pump a season-high 52 shots on Neuvirth.

Still, thanks to Neuvirth, the Sabres had a chance to win just their fourth game this season. Drew Stafford’s nifty goal put them 2-1 6:34 into the third period.

Then they imploded late.

The Sabres wasted another fine effort in net. Sooner or later, the huge workload could buckle the goalies. The Sabres have allowed an NHL-high 560 shots.

“Our goalies have been outstanding for us all year, both of them,” Sabres defenseman Josh Gorges said. “It’s about time we started paying them back a little bit. It wasn’t a ton of great scoring chances against, but we got to limit the workload for these guys.

“We got to find a way to start playing more time in the offensive zone and stop making our goalies work so much.”

The Sabres made some progress earlier this week, winning a 3-2 shootout against Detroit on Sunday before losing a 2-1 shootout to Montreal on Wednesday.

“When you don’t want to compete and you don’t want to fight for the puck, that’s what’s going to happen,” Sabres coach Ted Nolan said. “We went through this same song a number of times. The worst thing about it, we had a 2-1 lead. We made the biggest mistakes to give them the two goals to go ahead.”

Neuvirth added: “We got outworked, and they wanted to win more than us. Good for them, but we got to wake up. This can’t be happening, especially on home ice.”

Neuvirth said the Sabres “can’t take anybody lightly in this league.”

“The effort was just not there,” he said. “We got to be very better than what we showed tonight.”

The Oilers, who lost 5-2 in Boston on Thursday, pounced on the Sabres early, pumping 19 shots on Neuvirth in the first period.

“They came at us, they came at us hard,” Gorges said. “They pinched on the walls. They played in-your-face. I just don’t think we did a good enough job of playing under pressure, making the right reads and winning enough battles.”

Nolan added: “We couldn’t put two passes together. We’d get it up to the wingers, the wingers couldn’t do anything on the boards. Too much pressure for them. There was no support. So it started from the first period. We never adjusted.”

Gordon’s goal irked Nolan, who believes the players’ problems are “between their ears.”

While he didn’t use his name, Nolan ripped Andrej Meszaros’ effort on the goal. The defenseman couldn’t clear the puck, allowing Teddy Purcell to feed Gordon.

“Their last puck was a perfect example of how the whole game went,” Nolan said. “You stop and you chip it out at the blue line. It’s one foot away. You don’t try to backpedal and try to flick it out skating away from it like you’re afraid to get hit.”

Matt Moulson’s first goal this season opened the scoring 26 seconds into the second period. Edmonton’s Iiro Pakarinen tied it at 1:20, however.

But when the Sabres ended their skate Friday morning, Neuvirth went off the ice first, meaning he had earned the start.

“Oh, I thought I said Neuvy was going to start,” Nolan said.

Update: Sabres center Tyler Ennis received a misconduct for hitting an official at 20:00 of the third period and could face a suspension. Stay tuned for details.