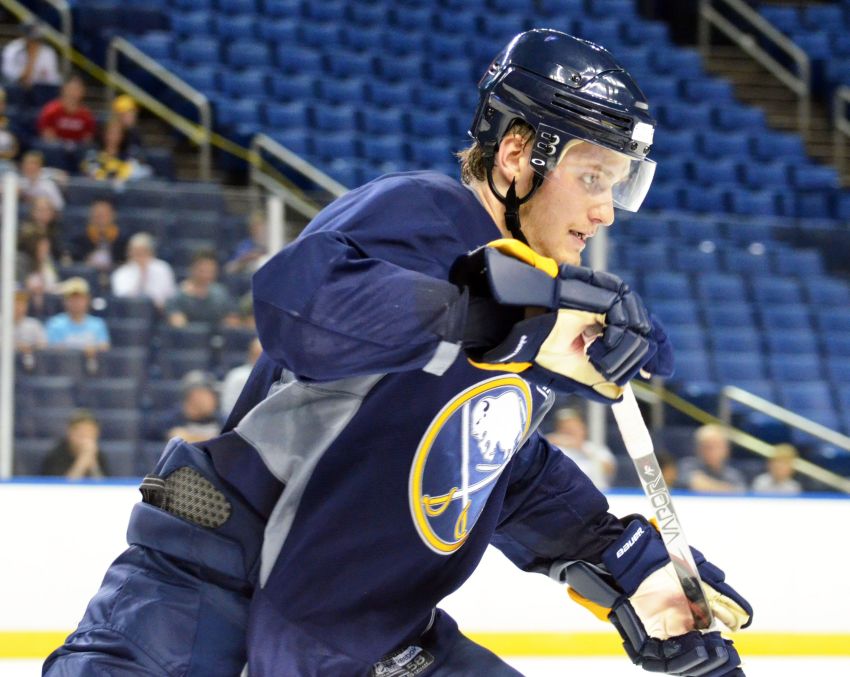 The Sabres said in June prospect Mikhail Grigorenko would have a chance at an NHL roster spot. ©2013, Dan Hickling, Olean Times Herald

BUFFALO – Thanks to the agonizingly long NHL lockout, 281 days have passed since the Sabres last played a game. Thankfully, the team will finally start an abbreviated training camp today. The season opens in just a week.

So what’s changed in the last nine months? How’s this group different from the high-priced, ninth-place team that was built to win the Stanley Cup in 2011-12?

The Sabres got tougher, acquiring Steve Ott to be the talented sandpaper presence they’ve sorely lacked for years. John Scott, all 6-foot-8 of him, is the new tough guy. The Sabres’ haven’t employed a full-time scrapper since Andrew Peters left in 2009. It’s certainly shown at times.

Defenseman Adam Pardy, acquired with Ott from Dallas for center Derek Roy, is the only other notable veteran addition.

Naturally, all eyes will be pinned on slick center Mikhail Grigorenko, the 12th overall pick in June’s NHL Entry Draft, during camp. The Russian’s vying to become the Sabres’ first regular 18-year-old since Pierre Turgeon in 1987-88.

The Sabres merely tweaked the roster during the offseason. In their estimation, injuries doomed them last season, not a lineup full of underperforming players. They point to their 20-8-6 season-ending run – a period when the roster was mostly healthy – as evidence.

Expectations have been significantly tempered this year. The championship talk that dominated the Sabres’ last camp 16 months ago is nonexistent. Just making the playoffs would be progress.

Here are some interesting things to follow during camp:

What do the Sabres do with Grigorenko?

Grigorenko could earn a spot in the opening-day lineup if he doesn’t fall on his face during camp.

“I think he’ll be able to make plays,” Sabres coach Lindy Ruff said last week. “I’m very intrigued to see what he can do against and with top NHL players.”

The Sabres can play the youngster five times (down from the regular nine) before his contract kicks in. It sounds like they’re intrigued enough to use the trial.

With 29 goals and 52 points in only 32 games with the Quebec Remparts, it appears Grigorenko’s outgrown the QMJHL (he’s too young to play in the AHL). He also performed well during the recent world junior championship.

Grigorenko could enjoy an early camp advantage since he’s been going full tilt and playing games since August.

But where does he fit in?

Right now, Tyler Ennis and Cody Hodgson are entrenched as the top two centers. That leaves Grigorenko as the No. 3 pivot, possibly beside Ott, Nathan Gerbe (when he’s healthy), Ville Leino or ever Patrick Kaleta.

The Sabres began saying Grigorenko had a chance to make the big club minutes after they drafted him. Still, they’re not going to give him a roster spot for the sake of it. He won’t be skating seven minutes on the fourth line. He’s going to have to secure a spot he can thrive in.

Whatever happens, Grigorenko’s presence will be camp’s most intriguing storyline.

What about the loaded defense corps?

While nine defensemen will be participating in camp, it’s possible the Sabres could trade or release one or even two before opening night.

Who’s on the bubble?

T.J. Brennan already has 13 goals and 33 points in 35 games with Rochester this season and 44 scores in his last 159 AHL contests. The 23-year-old must clear waivers. Are the Sabres willing to risk losing the 31st overall pick in 2007 for nothing as he’s reaching the peak of his development?

Ruff said last week Brennan will be given every chance to make the team.

Meanwhile, it’s unknown where Pardy and his $2 million salary (or what’s left of it after the lockout) fit in. General manager Darcy Regier said during the summer Pardy was on the Sabres’ radar when he played for Calgary. But was he just a throw-in the Sabres accepted to get Ott?

Based on last season, the Sabres’ top six appear to be Christian Ehrhoff, Jordan Leopold, Tyler Myers, Robyn Regehr, Andrej Sekera and Alexander Sulzer. That leaves Brennan, Pardy and Mike Weber fighting for one or two other spots.

Defensemen are always in high demand during a normal 82-game season. The grind of a compacted 48-game slate will almost certainly send more to the sidelines. The Sabres have a lot of assets and options.

Where does Leino fit in?

The Sabres overpaid and reached for Leino, a winger during his brief NHL career, to be their No. 2 center. He was a winger again by October and went back to the middle before returning to the wing.

It didn’t matter where the Finn played. He was a colossal disappointment, scoring only eight goals and 25 points in 71 games.

It’s easy to forget because he’s 29 years old and a proven playoff performer, but Leino’s played only two full NHL seasons. He enjoyed his 21-point 2010 postseason after playing sparingly during the regular season. He’s still a bit green.

Clearly, he’s a complimentary player – think about 18 goals and 45 points at his best – not a top center. The Sabres know that now. Leino’s had more than a year to figure out Ruff likes players who go to the net and shoot, not east-west puck carriers.

If Leino doesn’t improve and fit his talents to Ruff’s system, he could get bought out following the season.