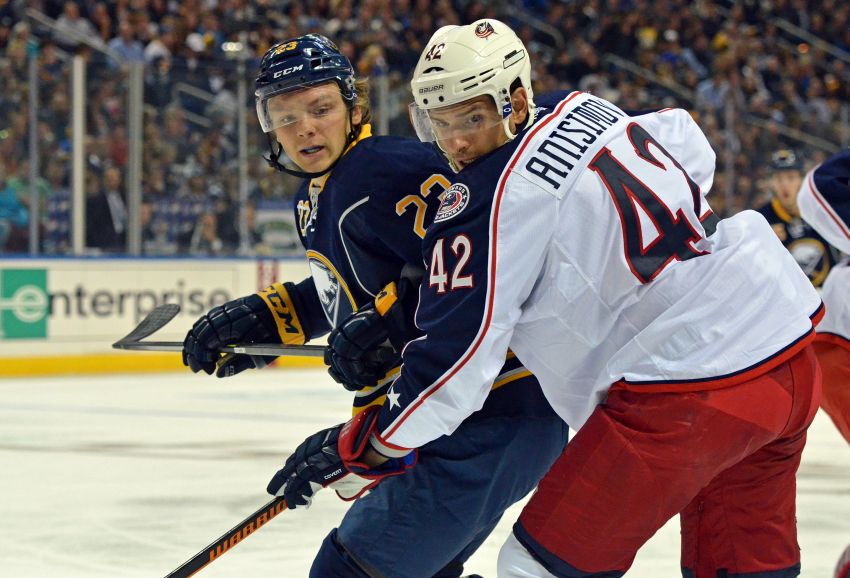 – Defenseman Andrej Meszaros, a minus-6, will be benched tonight in Carolina for Tyson Strachan.

– Cody Hodgson, a winger from late last season through Monday’s ugly 5-1 loss to Anaheim, switched from the left side back to center this morning.

– Rookie center Sam Reinhart was dropped to the fourth line.

The 0-3 Sabres are already the NHL’s worst team.

“It’s mind-boggling to me when you don’t compete and you don’t work,” Nolan told reporters in Raleigh. “You don’t need any skill set for that. You need something inside to go out, compete and battle. We’ve shown it for parts of three games, and all of a sudden, a tough thing happens, we make a mistake, we go right into a mode of, ‘Oh well, there’s another loss,’ versus trying to break through it.”

“We only have a limited group, so nobody’s safe from that position,” he said. “I mean, nobody.”

Hodgson is pointless, a minus-4 and has one shot.

“A goal scorer needs someone to give him the puck, “Nolan said, “and right now the center ice situation we have, we can’t get him the puck sometimes, so maybe putting him with some bigger wingers, the wingers will get him the puck and he’ll have an opportunity to do his thing, and that’s shoot and score.”

Meanwhile, Reinhart, the No. 2 pick in June, will skate beside Nick Deslauriers and Cody McCormick tonight.

“It’s a fast game out here, and right now he’s still adjusting,” Nolan said. “We’ll cut his minutes down a little bit and still get him out there in key situations.”

The Sabres have nine games to evaluate Reinhart before his contract kicks in. But if the 18-year-old is playing limited minutes on the last line, he could be back in junior soon.

Despite all the struggles, Nolan said he hasn’t lost sight the team has “a good group of guys.”

“Just for whatever reason, it’s not working,” he said.