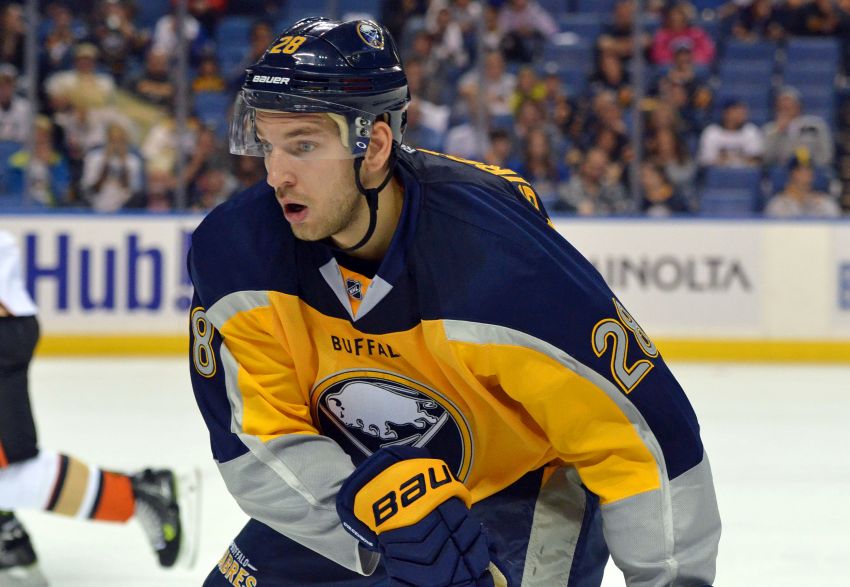 Coach Jim Montgomery and his Dubuque Fighting Saints told stories – well, more like tall tales – about Girgensons, their hard-nosed Latvian captain, and dubbed them “The Legend of Zemgus.”

“Because of the way he plays,” Montgomery said by phone Wednesday, “some of them are believable, like Zemgus means ‘one who eats lions’ in Latvian.”

Montgomery was watching the Sabres’ 3-1 season-opening defeat to Columbus last Thursday when Girgensons scored a highlight-reel goal, blowing by defenders and beating the goalie as he fell to the ice.

“You watch him play, and he plays the game with such reckless abandon and fearlessness,” Montgomery said.

Girgensons, who’s starting his second NHL season, is beginning to showcase some supreme talent to match his grit and work ethic. The 20-year-old center has arguably been the Sabres’ best player through four games. Before netting the shootout winner in Tuesday’s 4-3 triumph in Carolina, he scored in the first two games.

Montgomery traces Girgensons’ rapid growth – it took him 29 games to score his second goal as a rookie – to his “incredible work ethic to find a way to succeed.”

Being a great teammate helped the Fighting Saints, a junior United States Hockey League team, unanimously vote Girgensons captain as a 17-year-old before the Sabres selected him No. 14 in 2012.

Montgomery believes Girgensons possesses the leadership qualities to be an NHL captain someday.

“His work ethic and his dedication to the team and the way he wills players to be better, it’s magnetic,” Montgomery said. “People say (Chicago captain) Jonathan Toews, I think he has those qualities of a captain that Jonathan Toews has.”

Some players, Montgomery said, “just constantly want to get better and want to learn.”

“That makes your job fun and easy,” he said.

Montgomery understands why Girgensons has become so popular in Buffalo.

“He’s a blue-collar guy, right? And he’s just like the city,” he said. “He fits in Buffalo or cities like Pittsburgh – tough east coast cities. He’s easy I think for any fan to align themselves with.”

A local company, Store 716, is even selling a “Latvian Locomotive” shirt with “Zemgus” underneath a speeding train with No. 28.

The Sabres had Wednesday off following their first win this season.

Coach Ted Nolan, who ripped the Sabres following an embarrassing 5-1 home loss to Anaheim on Monday, said his players responded to his challenge Tuesday.

“No question,” he told reporters in Raleigh. “I’ve never questioned the character of this team once. We weren’t playing very well for whatever reason. We have to find a solution to our problems together.”

Nolan said he spoke with Sabres captain Brian Gionta on Monday night. The veteran winger responded with his best game.

“One thing about captains and good ones, sometimes they grab a team, put them on their back and try to get them out of the mess we’re in,” Nolan said. “Tonight was a perfect example why he’s our captain.”