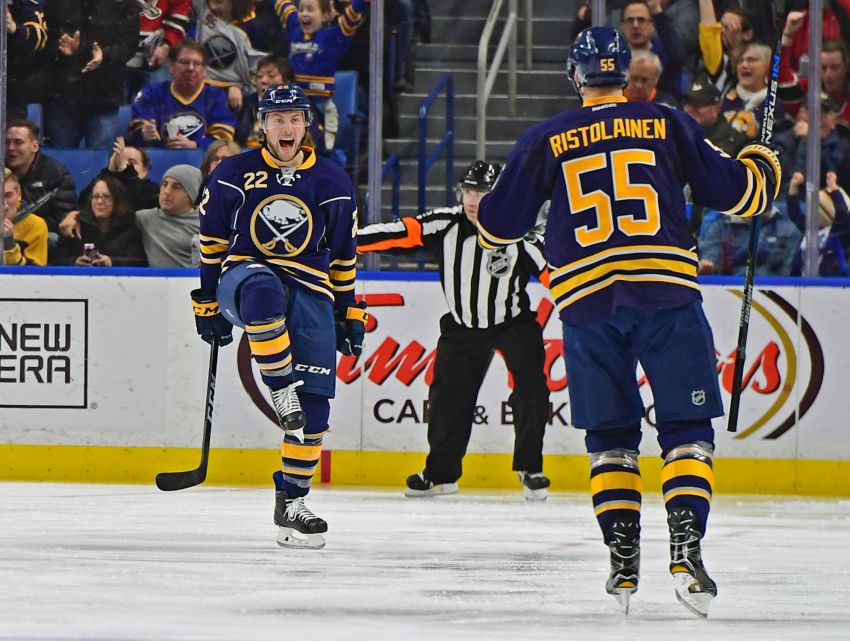 BUFFALO – As Kyle Okposo started zooming up the ice on a long two-on-one in overtime Friday, the Sabres winger initially had one thought: shoot the puck.

But when Okposo hit the center red line, he spotted defenseman Rasmus Ristolainen racing into the play from behind.

“I knew I was giving it to him at that point,” Okposo said following the Sabres’ 3-2 comeback win against the New York Islanders, his former team he faced for the first time. “I just tried to suck the D-man in and give it to him.”

Ristolainen made it clear he wanted the puck badly.

“I tried to yell, tap my stick and do everything that he can hear me,” Ristolainen said.

When Okposo hit the left circle, he pivoted at the dot, turned and quickly fed a trailing Ristolainen high in the slot. The Finn skated a few strides and beat Islanders goalie Jean-Francois Berube 42 seconds into overtime.

Ristolainen’s second overtime goal in four games – he also beat Edmonton on Dec. 6 – secured the Sabres’ second straight victory in which they roared back after falling behind in the first period.

“We had to fight and claw to come back in the game,” Bylsma said. “I thought we started to do that in the second.”

In Tuesday’s 6-3 win against Los Angeles, a four-goal second period buoyed the Sabres. On Friday, they erased two one-goal deficits against the Islanders, who rank 16th in the Eastern Conference and played the night before.

Matt Moulson’s power-play goal tied it at 2 3:19 into the third period, setting the stage for Ristolainen’s heroics before the announced crowd of 18,903 fans inside KeyBank Center.

“It’s says we’re hardworking, we never give up,” Ristolainen said of the comeback victories. “We are having fun with each other, we trust and we know the way we played the last two games late in the game, that’s the way we’re going to win.”

Moulson added: “It speaks to how confident we are as a group in here. We’re down goals in the last two games and got back to how we wanted to play.”

For all their troubles this season, the Sabres, who moved above .500 to 12-11-6, have started to develop some swagger and goal-scoring prowess recently.

Eichel, who went pointless, briefly left the game after Islanders defenseman Johnny Boychuk knocked him head-first into the boards 9:12 into the third period.

“The reaction from the crowd was enough to put anyone’s heart in their throat,” Bylsma said.

Still, Eichel didn’t leave the ice right away. After briefly staying down, he remained on the ice for the power play. A concussion spotter then removed him from the game, Bylsma said.

Eichel returned a few minutes later, and was on the bench for Ristolainen’s exploits.

“He makes plays and he creates offense and you need that,” Okposo said. “He’s our No. 1 D-man for a reason.”

Ristolainen, whose 19 assists rank 12th in the NHL, has assisted on 30.1 percent of the team’s goals he hasn’t scored this season.

Right now, Ristolainen has two goals and 21 points in 29 games, 59-point pace over a full campaign. He had nine goals and 41 points a year ago.

While Ristolainen hasn’t scored as many goals this season, he was “still providing that offense with his passing and his puck movement,” Bylsma said.

“Now he’s jumped on the score sheet with two overtime winners for us,” he said.

“Robin kept us in it and fortunate to keep it at 1-0,” Bylsma said. “He made five or six really good saves there in the first period and kept us in the game.”

The Sabres play tonight in Carolina against the Hurricanes.